Visible Body - Virtual Anatomy to See Inside the Human Body 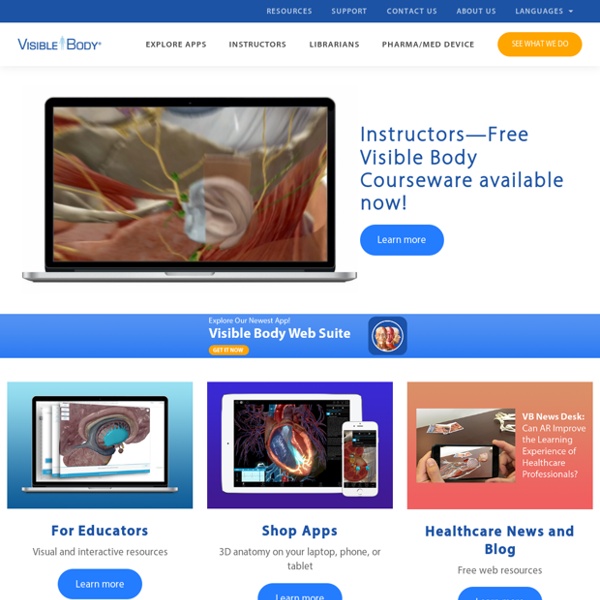 Brain Games are Bogus A decade ago, a young Swedish researcher named Torkel Klingberg made a spectacular discovery. He gave a group of children computer games designed to boost their memory, and, after weeks of play, the kids showed improvements not only in memory but in overall intellectual ability. Spending hours memorizing strings of digits and patterns of circles on a four-by-four grid had made the children smarter. The finding countered decades of psychological research that suggested training in one area (e.g., recalling numbers) could not bring benefits in other, unrelated areas (e.g., reasoning). The Klingberg experiment also hinted that intelligence, which psychologists considered essentially fixed, might be more mutable: that it was less like eye color and more like a muscle. It seemed like a breakthrough, offering new approaches to education and help for people with A.D.H.D., traumatic brain injuries, and other ailments.

Vitamin B1 Lists of Nobel Prizes and Laureates Vitamin B1 Play the Chicken Farm Game Brain Atlas - Introduction The central nervous system (CNS) consists of the brain and the spinal cord, immersed in the cerebrospinal fluid (CSF). Weighing about 3 pounds (1.4 kilograms), the brain consists of three main structures: the cerebrum, the cerebellum and the brainstem. Cerebrum - divided into two hemispheres (left and right), each consists of four lobes (frontal, parietal, occipital and temporal). Select The Best Logo Design For Your Brand Our brand identity builder has been used by 7 million small businesses. Thousands of icons and fonts We have an enormous database of icons, fonts, and graphic elements, all for you to browse for your logo design. Save your time and money on a designer

The Unwinding Documentary My name is Katie Brockway. Working as a Myofascial Therapist, I became fascinated by the process of something that we call "unwinding". It had helped me immensely but I struggled to explain it to my clients. I knew that I would have to show it to them for them to understand. Baader-Meinhof Phenomenon: a Curious Cognitive Effect Have you ever learned about a new word, fact, idea or product and subsequently see it everywhere around you? This curious cognitive effect is known as the Baader-Meinhof Phenomenon. So, is it just a coincidence? Or is there a scientific explanation behind this phenomenon? In this post, we take a look at what the Baader-Meinhof effect means and the science behind it. We will also explore where the name for this interesting cognitive effect comes from.

Tuberculosis Lists of Nobel Prizes and Laureates Tuberculosis Play Tuberculosis Experiments & Discoveries About the game bodies-in-motion - scott-eaton.com 30 second sequences from BiM Not long ago, I had twelve artists from Natural Motion (of Morpheme and Clumsy Ninja fame) into Somerset House, my home away from home, for a four day anatomy workshop. At the end of each day we would take about 20 minutes to draw from the Bodies in Motion library. Animated GIF Maker Online GIF maker GIF maker allows you to instantly create your animated GIFs by combining separated image files as frames. Produced GIFs are of high quality and free of watermarks or attribution, making this tool ideal for developers and content creators. To make a GIF, you can upload a sequence of GIF, JPG, PNG, BMP, TIFF, HEIC, AVIF, and other types of images, ZIP archive containing images, and even mix different formats and sizes - they will be converted automatically. You can also upload animated GIF, WebP, or APNG images, they will be split and delay times preserved.

Habitual posture. Habitual emotion. Habitual thought. « olivier goetgeluck Observing people has always been one of my favorite pastimes. I enjoy setting myself down with a book in a local café, pretend that I’m reading and then take a look at how the bartender is stressing out over clients, how people are enjoying or disliking listening to the story of a friend, people fighting verbally in cycling traffic, awkward situations of people meeting an old friend they would rather avoid today, other observers realizing you’re also observing, all of that… I love it and every time it teaches me something. Recently, this fascination of observing people’s daily behavior has gotten a bit more specific through the stuff I’ve been reading and the teachers I’ve met formally and on the streets.