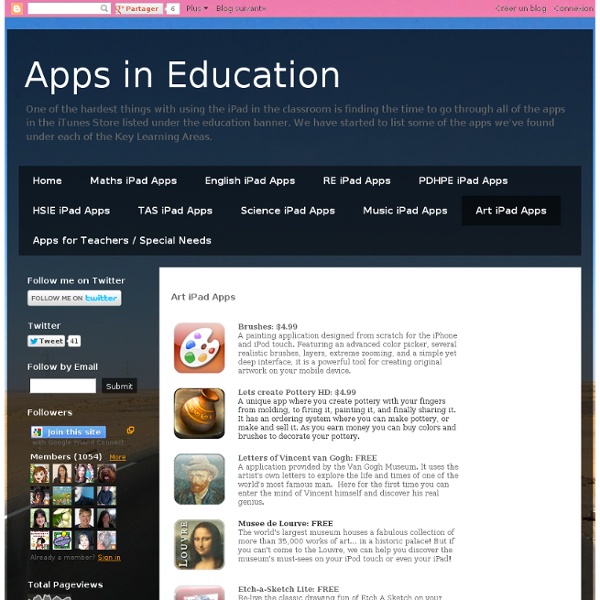 Art Apps Showcase | iPad and iPhone Art Apps | ART CULTURE Our art apps showcase opens with these fifteen entries, and will expand over time. If you have a favorite art-related app that should be listed here then let us know! The list inclues some of the top drawing and painting apps for creating iPhone and iPad art, and some amazing generative/interactive apps that may be considered art in their own right. Some were originally designed for iPhone, others were adapted for iPhone from other software. Of course we can expect a flood of new iPad art apps in the coming months–in fact it’s already well under way. SketchBook Pro for iPad and Brushes for iPad, appeared last week with expanded “big screen” feature sets and higher download prices than previous mobile versions. These are just the apps, but ArtCulture will be featuring a new iPad art gallery soon. Drawing and Painting Apps for Artists SketchBook Pro for iPad and SketchBook Mobile Autodesk Inc. Brushes Brushes Mobile Painting Both Brushes and SketchBook Pro for iPad were released on April 1. Zio

iPads can’t improve learning without good teaching Pt 1 Clearly there is a lot of buzz around iPads in schools at the moment. You can’t log on to the Web without reading about another school or entire district or department investing massive coin in a sparkling set of the Wonder Tablets, excited that they will cure all the ills of the current education systems around the world. From reading my blog, you would be no doubt convinced that I am very much in this Pro-iPad camp. However, no matter how versatile and potentially powerful a product the iPad is, it is merely an extremely expensive placemat without creative, well planned teaching behind its use. Its about Teaching and Learning, not iPads The kind of shift in learning the iPad (and other tablets) can initiate is dependent on good teaching practice and preparation. So let’s look at how we have gone about teaching up until now and examine how the iPad can fit in to our current programs. This type of sophisticated note taking will take time to embed in both student and teacher practice.

How to Find iPad Apps - iPad Basics With over 300,000 apps designed for the iPad and many more compatible iPhone apps, you can imagine that finding a good app can sometimes be like finding a needle in a haystack. Luckily, there are several ways to help you find the best apps. One great way to find quality apps is to use Google rather than searching the App Store directly. But Google won't always yield the best results, so here are a few other tips for finding great apps: Featured Apps. Next: Learn how to install iPad apps.

The Art World is Going Mobile – Collectrium Announces Custom iPad Apps for Galleries (PRWEB) September 15, 2011 Collectrium today announced general availability of the Custom iPad Apps for Art Galleries and Dealers. With 400 million Internet users connecting to the Web through mobile devices rather than computers by 2014, the world is going mobile. The Custom iPad Apps for Galleries is an intuitive and comprehensive mobile inventory and art presentation solution backed up by Collectrium’s next-generation cloud-based inventory system. “Anywhere you can take your iPad, your entire art inventory is now with you: at an art fair, in a sales office, at a restaurant, wherever you meet clients and want to showcase your artworks in the most elegant way possible,” explained Anna Ortt, Director at Mike Weiss Gallery. “The Amstel Gallery iPad app, powered by Collectrium, has proven to be a great marketing tool,” said Petra Leene, Owner and Director, Amstel Gallery. About Collectrium To learn more about Collectrium, visit

iPads In Art Class For Kindergarteners PORTLAND, Maine -- Kindergarten classes are supplementing crayons, finger paints and flashcards with iPads, a development that excites supporters but that detractors worry is wasted on pupils too young to appreciate the expense. Next fall, nearly 300 kindergartners in the central Maine city of Auburn will become the latest batch of youngsters around the country to get iPad2 touchpad tablets to learn the basics about ABCs, 1-2-3s, drawing and even music. "It's definitely an adventure, and it'll be a journey of learning for teachers and students," said Auburn kindergarten teacher Amy Heimerl, who received an iPad on Tuesday ahead of the full deployment in the fall. "I'm looking forward to seeing where this can take us and our students." But the $200,000 that Superintendent Tom Morrill is proposing to spend on iPads – which retail for around $500 – might be better spent on some other school program, said Sue Millard of Auburn, who has children in the fourth grade and high school.

ArtTIP2.0 About this webmix : No description last updated at: Sep 12, 2014 3:00:38 PM Create - Picassohead Sumo Paint Paper Camera for iPhone 3GS,.. Escher 360 Tessellation Town -- tessell.. 10 best iPad art apps for pa.. The Story of Animation Free Kids Art games, lessons.. Teach Animation 11 iPad Apps for Presentatio.. 6 reasons to use iPad in Art 2D anim For Kids Painting on iPads on Vimeo iPads & Inqui Animation for kids - Create .. Symbaloo-ers that viewed the webmix above, also viewed: Art of the iPad brings out the creativity of toddlers and tots Jonathan Gay works as a project manager for a pre-school in Newton, PA and has created a project he named Art of the iPad. He wanted to see how creative very young kids could be using new technology without the usual prerequisite of training. Not wanting to use any of the existing art apps for children, Jonathan decided on using ArtRage (US $6.99), a fully featured painting app with a simple interface that includes pencils, brushes, rollers, spray paint and other tools that can create quite realistic painting effects with a swipe of the finger. ArtRage3 is far more than a coloring book and is not geared to use by kids. In turn, each child, who was given next to no instruction, had a go to see what they could come up with. Children used different tools. When I bought my first Apple ][+ in the late 70s, I had no real need for it.

Six reasons iPad is an artist's productivity tool There's a lot of folks who say the iPad isn't proper competition for netbooks because it isn't a 'productivity tool'. They're all wrong. Take the visual arts, for example, and you'll find a growing army of examples of artists using the Apple device to create stunning pieces of art, here's six stories to illustrate this. Clearly this illustrates why netbook sales have cramped up and why Apple's iPad is such a success, because it unlocks imagination for users, developers, old and new media. [This story is from the new Apple Holic blog at Computerworld. David HockneyOne of the UK's leading artists, David Hockney is revered. "It can be anything you want it to be. Hockney last year made a splash when he revealed his work using the iPhone (and the Brushes app), as detailed in this video here. 'Magical' iPad's Manga magicManga artist Yoshitoshi ABe is enormpusly talented. Yoshitoshi ABe first gained fame in his work on the avant-garde anime Serial Experiments Lain. He didn't stop there.

Art and Artistry iPad Apps If you've always wanted to be an artist, you can find iPad apps that let you do just that. You can also use iPad apps simply to appreciate good works of art. Art Authority for iPad Having Art Authority is like having the history of Western art in pictures and words on your iPad. Brushes Brushes is a drawing-and-painting app designed exclusively for the iPad. Color Splash for iPad Color Splash focuses on doing one thing well: converting a photo to black and white, and then enabling you to colorize specific parts of it. When you open a picture in Color Splash, it's converted to black and white automatically. This picture shows a finished Color Splash picture, in which the Color brush reveals the colors in the sky and sunset at the top of the image and the pool and chairs at the bottom. Photogene for iPad Photogene is an image manipulation program with an exceptional and user-friendly interface. Unlike most similar apps, Photogene can edit high-resolution RAW files. Strip Designer Free ArtStudio