Ipl2: Information You Can Trust 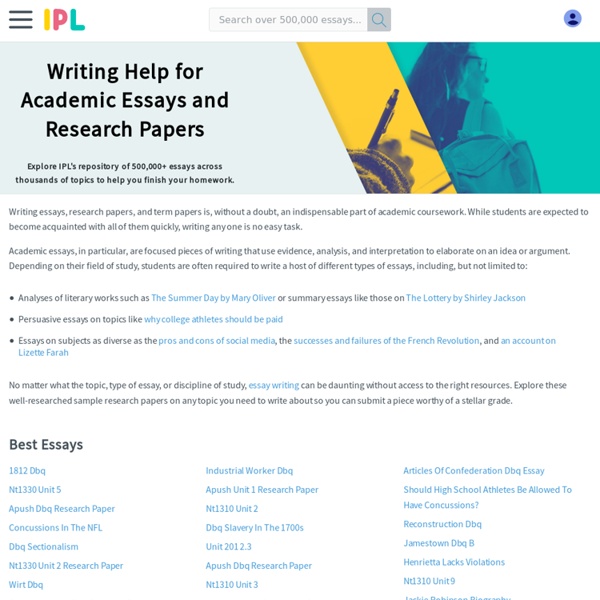 SCIENCE FICTION TECHNOLOGY TERMS The following items are found in science fiction literature as technologies useful in authoring a plausible setting for a sci-fi story: PROPULSION: Faster Than Light Drive (FTL) is required for stories about star based exploits. Twentieth century rocketry is limited to activities in the Solar System. At present spacecraft velocities, the nearest star would require voyages of thousands of years.

Visualization: Motion Chart - Google Chart Tools - Google Code Overview A dynamic chart to explore several indicators over time. The chart is rendered within the browser using Flash. Note for Developers: Because of Flash security settings, this (and all Flash-based visualizations) might not work correctly when accessed from a file location in the browser (e.g., rather than from a web server URL (e.g., This is typically a testing issue only. You can overcome this issue as described on the Adobe web site. ITIL® - What is ITIL? ITIL is the most widely adopted approach for IT Service Management in the world. It provides a practical, no-nonsense framework for identifying, planning, delivering and supporting IT services to the business. ITIL: Overview and Benefits 20 Ways To Search the Invisible Web When you access the invisible/deep web, you're uncovering information a regular search engine won't find. This is because data on the invisible web isn't made available to software spiders and crawlers that create search engine indexes. Given that the invisible web makes up a huge majority of the content on the web, it's fair to say that you're missing out on quite a lot if you never venture away from popular search engines like Google and Bing. Below are 20 invisible web search engines, directories, and databases that you can use to uncover an astounding amount of content. The invisible web is only part of the web that common search engines don't catalog. The other portion, called the dark web, is often associated with illegal activities.

Lushprojects.com - www.lushprojects.com - Circuit Simulator This electronic circuit simulator is highly interactive giving the feeling of playing with real components. It's very helpful for experimentation and visualization. Best of all, thanks to the power of HTML5, no plug-ins are required! The original implementation, in Java, belongs to Paul Falstad who kindly gave his permission for me to build this port. Human Rights Library- University of Minnesota The University of Minnesota Human Rights Center has developed this Library with generous support from the Ford Foundation, Samuel Heins, the JEHT Foundation, the John Merck Fund, the Joyce Mertz-Gilmore Foundation, the Open Society Institute, the Sigrid Rausing Trust, the U.S. Institute of Peace, the University of Minnesota Law School (including the University of Minnesota Law Library), the Weyerhaeuser Family Foundation, the West Group, JWECF (Japan World Exhibition Commemorative Fund), and other contributors. In-kind advertising support has been provided through a Google Grant award. The Library also commemorates the pioneering work of Diana Vincent- Daviss.

The World Wide Web Library Directory Currently indexing over 8800 libraries and library-related Web sites in 130 countries. This site contains no ads, and is not built from a database that will only allow you to view one listing at a time. And while you're at it, check out the related site: The Great Library Card Collection Here's a blast from the past. The directory as it looked in 1995! Countries

Deep Web Links with Categories Deep Web Links are upon us! Welcome to Security Zap! Since we are nearing the end of the year and the festive season is upon us we decided to update our massive deep web sites list with new deep web links of 2015 and categorization! Now you will be able to search your desired categories instead of crawling the massive list for your desired link. Humans Have a Lot More Than Five Senses Today I found out humans have a lot more than five senses. It turns out, there are at least nine senses and most researchers think there are more like twenty-one or so. Just for reference, the commonly held definition of a “sense” is “any system that consists of a group of sensory cell types that respond to a specific physical phenomenon and that corresponds to a particular group of regions within the brain where the signals are received and interpreted.” The commonly held human senses are as follows: Sight: This technically is two senses given the two distinct types of receptors present, one for color (cones) and one for brightness (rods).Taste: This is sometimes argued to be five senses by itself due to the differing types of taste receptors (sweet, salty, sour, bitter, and umami), but generally is just referred to as one sense.

The Internet Public Library allows staff and students assess to books that are no longer in print or that are rare. It also allows books to be projected and read online for an entire class to see with ease. by milburnb Mar 15