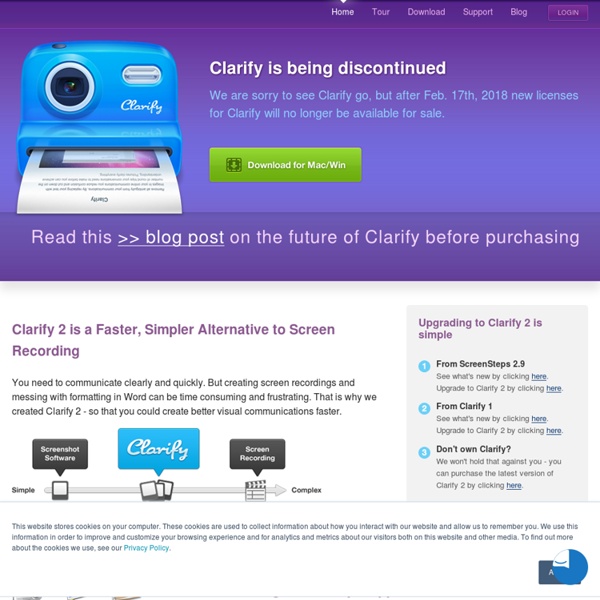 Snagit Screen Capture Software & Screen Recorder | TechSmith Screen Recorder Snagit's screen recorder lets you quickly record yourself working through steps. Or grab individual frames out of the recorded video. Record Audio Include audio in your videos from either a microphone or your computer's system audio. Record Camera Record your screen or camera — or record them both at the same time with picture-in-picture to add a personal touch. Cloud Library Find, open, and edit captures fluidly as you move between computers (Windows or Mac), when they are synced via the cloud provider of your choice. Animated GIFs Turn any short recording (.mp4) into an animated GIF, and quickly add it to a website, document, or chat. Trim Video Clips Remove any unwanted sections from your screen recordings. Create Video from Images Talk and draw over a series of screenshots to create a quick “how-to” video or GIF. All-in-One Capture Capture your entire desktop, a region, a window, or a scrolling screen. Panoramic Scrolling Capture Grab Text Text Replace Simplify Tool Stamps Smart Move

Swedish artist Sanna Dullaway has injected some colour into a host of historic photographs By John Hutchinson Updated: 16:02 GMT, 19 January 2012 They say some things are be better off left in the past. But Swedish artist Sanna Dullaway clearly doesn't agree with that concept as she has transformed some of the most famous black and white pictures ever captured into high resolution colour versions. While purists may disagree with the modernisation of such historic pictures such as the celebrations that marked VJ (Victory in Japan) day, images of devastation from Pearl Harbour and the shocking shot of a Viet Cong prisoner being shot in the head by an army general (demonstrating the brutality of the Vietnam War), the colour pictures do appear to re-emphasise the scene they are portraying. Little is known about the creator of these iconic images, but it is thought she is hoping to sell her work on the internet - and there is sure to be some firm interest. She writes on her Flickr site: 'Hi. It couldn't be simpler right? U.S. The aims for the devastating attack were for the U.S.

Screen Capture Software for Windows, Mac, and Chrome | Snagit Context is everything. Recording a video lets the person on the other end actually hear your voice. So the next time a webpage, PDF, or video edit is sent to you for feedback, consider dropping the red pen and record a video instead. With Snagit, there’s no waiting. You can record your video, and share it within seconds. Webcam recording - Toggle between webcam and screen recording during a video to add a personal touch with teammates or clients, no matter where they are.

RefWorks Home Page PowToon in Your Classroom Read Time: 6 minutes I recently read a study on creativity that blew my mind: “A major factor in creativity is education: not whether you had a ‘good’ or ‘expensive’ or ‘public’ education, but whether you were encouraged to develop your creativity starting at an early age and continuing throughout your school years.” — Adobe Powtoon in Your Classroom — Creativity & Education We saw this first-hand, when Edson Tellez, a volunteer teacher in rural Mexico, wrote to us about how Powtoon changed the way his students viewed the world. The mind blowing fact is that developing creativity is the primary determining factor in the overall success of your students! 1 – Students must have a platform to be creative with (physical materials, online programs, a stage etc…) 2- Direction – Even if you teach in the most affluent school, with the most expensive technology; your students are still only as good as the direction given to them. And Powtoon wants to help you ignite this creativity! 1. 2. 3. 4. Ms.

How To… Embed This Infographic <a href= ‎"><img src=" title="10 How Tos" alt="How To Infographic" border="0" class="nopin" /></a><br />Source: <a href=' title='Interesting Facts'><a href=' title='Interesting Facts'>Today I Found Out</a></a> 1) How to drastically increase the life of your shaving razor Before or after you shave (I prefer before so that the blades are dry), place your jeans on a hard flat surface; then run the razor up the pant legs about 10-15 times quickly; then repeat running it down the pant legs 10-15 times quickly. No need to press that hard, but a little pressure is necessary. necessary. The threads on the jeans then will very effectively both fix any tiny bends in the blades that inevitably happen and will also sharpen the blades on your shaver cartidge.

From Chalkboards To Chat Boards: What Will eLearning Look Like In 2075? Albert Einstein said: “Your imagination is a preview of coming attractions.” When we consider education, does this mean that we will eventually live in a world where learning feels more like play and everyone has access to equal education? Will we live in a world where learning is individualized so every student maximally benefits from the learning experience? We might. Let’s rewind a bit and appreciate how far we have come. Then learning resources abruptly changed in the late 20th century. As education spread across the country and infiltrated various socioeconomic groups, technology spread as well. The elearning domain has evolved over several iterations. What Does The Future Hold? Futuristic elearning will probably involve technologies and platforms that derive from current trends. MOOCs These are just what they sound like. mLearning (Mobile Learning) Soon, online courses will become readily accessible on mobile devices. Virtual Technologies Gamification What About Schools and Teachers?