What are Cognitive Skills and Abilities? 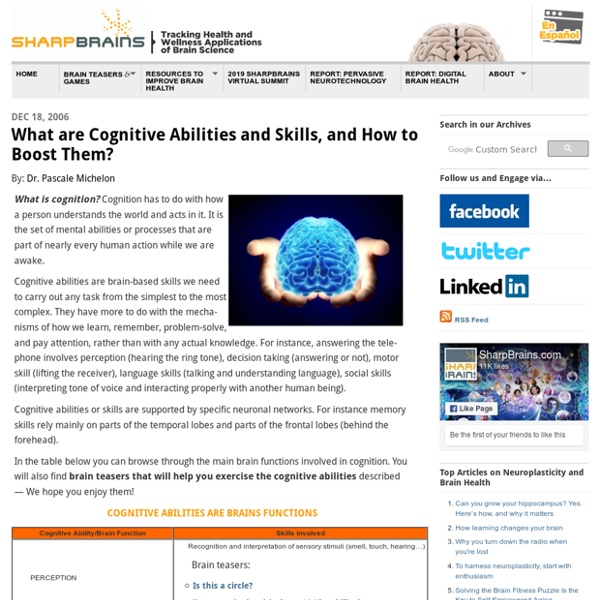 What is Normal Cognitive Aging? iStock.com/PeopleImages Everyone experiences a “senior moment” as they get older. Episodes of misplacing keys or forgetting an acquaintance’s last name doesn’t necessarily signal a brain disease. Cognitive Health and Older Adults Cognitive health—the ability to clearly think, learn, and remember—is an important component of brain health. Others include: Motor function—how well you make and control movements Emotional function—how well you interpret and respond to emotions Sensory function—how well you feel and respond to sensations of touch, including pressure, pain, and temperature This guide focuses on cognitive health and what you can do to help maintain it. The following steps can help you function every day and stay independent—and they have been linked to cognitive health, too. Take Care of Your Physical Health

Cognitive Skills and the Aging Brain: What to Expect Every day we perform hundreds of cognitive tasks but are mostly unaware of the effort involved. These tasks take different forms, such as noticing colors, remembering names, or calculating time on a watch. Measures of brain function using functional magnetic resonance imaging (fMRI) show that the most active areas of the brain vary according to the task being performed. LearningRx Brain Training Center Cognitive skills are the core skills your brain uses to think, read, learn, remember, reason, and pay attention. Working together, they take incoming information and move it into the bank of knowledge you use every day at school, at work, and in life. Brain training trains the cognitive skills the brain uses to think and learn. LearningRx is a one-on-one brain training center that uses over 35 years of research to target the underlining skills that are important to how you learn and perform. We have helped clients with reading struggles and dyslexia, attention struggles and ADHD, memory decline, learning disabilities, and more.

Tai chi have been found to improve cognitive function There are lots of jokes about forgetting where you put your keys, but as you get older, changes in your mental function are no laughing matter. Changes in your brain that start around age 50 can affect your memory, as well as other cognitive functions such as your ability to juggle multiple tasks, process information rapidly, and focus on details. By age 70, one in six people has mild cognitive impairment (which can progress to Alzheimer's disease). Want to keep your brain sharp in old age? Go back to school New research shows the brain has the ability to function well — and even excel — in old age. The secret? Keep learning. "Learning is the mechanism for development no matter how old you are," said Rachel Wu, an assistant professor of psychology at the University of California Riverside and the author of research published Wednesday in the Journals of Gerontology, Series B. Wu's study took an ambitious approach: have seniors in their 60s, 70s and 80s immerse themselves in a college-like atmosphere, enrolling in three somewhat rigorous courses simultaneously.

Attention Deficit Can Come with Old Age Source: Are you old enough that this sounds familiar? Actually, memory problems like these affect most people at some time, but getting older can make such forgetting worse. These memory problems happen because you lose attention and get distracted. How memory and thinking ability change with age Scientists used to think that brain connections developed at a rapid pace in the first few years of life, until you reached your mental peak in your early 20s. Your cognitive abilities would level off at around middle age, and then start to gradually decline. We now know this is not true. Instead, scientists now see the brain as continuously changing and developing across the entire life span. There is no period in life when the brain and its functions just hold steady. Some cognitive functions become weaker with age, while others actually improve.

What Is Mild Cognitive Impairment? Some people with memory problems have a condition called mild cognitive impairment, or MCI. MCI has several types. The type most associated with memory loss is called amnestic MCI. Aging & Cognitive Function How does aging affect memory and cognition (thinking)? Almost all of us become aware of changes in memory and cognition (thinking) as we get older. We begin to have difficulty recalling names of people and places, notice that our mental processing has slowed, and that learning is more difficult. We find that certain functions (for example, eye-hand coordination) are also slower. Cleveland Clinic is a non-profit academic medical center.