60 Best After Effects Tutorials Of All Times 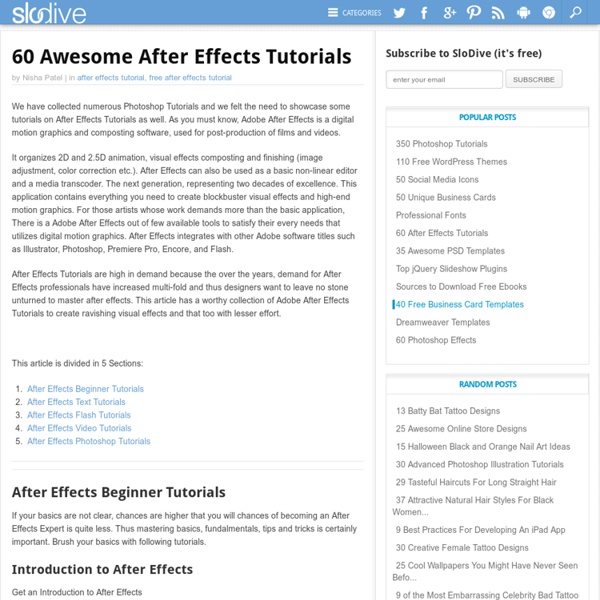 50+ Most Amazing Adobe After Effects Tutorials You Need to Learn Adobe After Effects is commonly used for creating visual effects and motion graphics. It allows users to animate, alter, and composite media in 2d and 3d space with various built-in tools and third party plug-ins. This software is really amazing and powerful. It’s even more interesting if you have some tutorials to start learning. Here is 50+ Most Amazing Adobe After Effects Tutorials You Need to Learn. 3D Light Casting In this tutorial, you will learn how to create an energy-ball that re-lights the road surface. Particle Explosion An after effect tutorial where you will build a complex particle system using CC Particle World. Scene Re-Lighting In this tutorial, you will use normal-map to relight 3d scenes in After Effects. throughout this tutorial you will apply more advanced lighting, reflection & Refraction. Energetic Titles Learn advanced tips and create “3d-looking” titles. Fracture Design This this tutorial you will use expressions, scripts and create a distressed title. Evolution Energy

Ink Watercolor Reveal | CreativeDojo In this tutorial, we’re going to take a look at how to create an organic ink/watercolor reveal transition using the Free Ink Mattes Pack by the CreativeDojo. We’ll cover some tips on how to use luma mattes, how to control the speed of the transition, some stylizing tips, and some ways to create that ‘watercolor paint’ look. Assets: Free Ink Mattes Pack Preview Video We’re going to be using two main effects in this tutorial: ToonIt (paid) and the Cartoon effect (comes with AE), both can replace one another for the most. Some Tips Watch out for overlapping layers, it’s crucial that you move the matte along with the layer you’re trying to reveal. Add some interesting camera angles and turn on that depth of field to achieve a really nice macro look. For a more organic ink reveal, try using variations of Fractal Noise with some Turbulent Displace. Hope you guys enjoyed this tutorial, if you create anything cool with the ink mattes, post them down below!