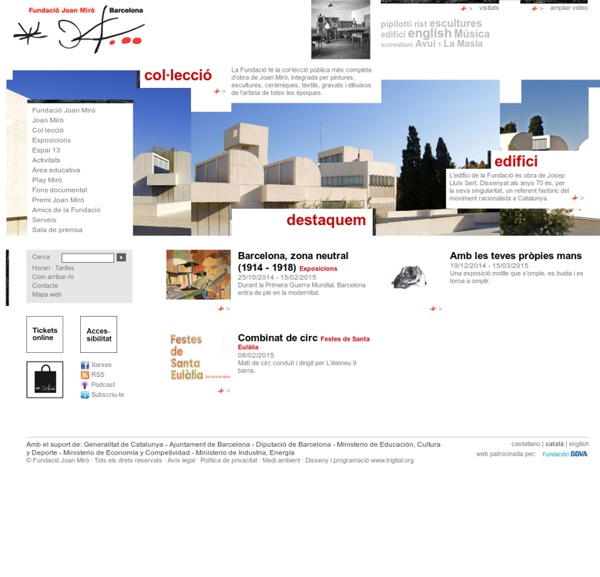 Arts Integration: Resource Roundup Facebook Edutopia on Facebook Twitter Edutopia on Twitter Google+ Pinterest Edutopia on Pinterest Supreme Council of Antiquities - Museums The Egyptian Museum in Cairo contains the world's most extensive collection of pharaonic antiquities; no visit to Egypt is complete without a trip through its galleries. The original collection was established in the late 19th century under Auguste Mariette and housed in Boulaq. The objects were moved in 1891 to the palace of Ismail Pasha in Giza before being transferred in 1902 to the current building at Tahrir Square, which is the first purpose-built museum edifice in the world. Designed in the Neoclassical style by Marcel Dourgnon, the Egyptian Museum boasts 107 halls filled with artifacts dating from the prehistoric through the Roman periods, with the majority of the collection focused on the pharaonic era. The museum houses approximately 160,000 objects covering 5,000 years of Egypt's past.

Orphism (art) The Orphists were rooted in Cubism but moved toward a pure lyrical abstraction, seeing painting as the bringing together of a sensation of pure colors. More concerned with the expression and significance of sensation, this movement began with recognizable subjects but was rapidly absorbed by increasingly abstract structures. Orphism aimed to dispense with recognizable subject matter and to rely on form and color to communicate meaning. The movement also aimed to express the ideals of Simultanism: the existence of an infinitude of interrelated states of being.[3] The Symbolists had used the word orphique in relation to the Greek myth of Orpheus, who they perceived as the ideal artist.

Ronald Jones at Grazer Kunstverein Artist: Ronald Jones Venue: Grazer Kunstverein, Graz Exhibition Title: 1987-1992 Curated By: Jason Dodge Date: September 27 – November 23, 2014 Click here to view slideshow Piss Christ Piss Christ Piss Christ is a 1987 photograph by the American artist and photographer Andres Serrano. It depicts a small plastic crucifix submerged in a glass of the artist's urine. The piece was a winner of the Southeastern Center for Contemporary Art's "Awards in the Visual Arts" competition,[1] which was sponsored in part by the National Endowment for the Arts, a United States Government agency that offers support and funding for artistic projects, without controlling content. Description[edit] The photograph is of a small plastic crucifix submerged in what appears to be a yellow liquid.

Rotating Snake Illusion Back­ground – In the image above the strong (and beau­ti­ful) ro­ta­tion of the “wheels” oc­curs in re­la­tion to eye move­ments. On steady fix­a­tion the ef­fect van­ishes. For an ex­plana­tory hy­poth­e­sis, view the an­i­ma­tion on the right. You ma y wish to press the ‘Stop’ but­ton after a while … it gets on one’s nerves ;-). See also Backus & Oruc 2004 for their ex­pla­na­tion. WebCite archive page This page allows you to submit a single URL for instant archiving with WebCite®, a member of the International Internet Preservation Consortium. Archiving in WebCite® allows anybody (particularly authors and editors of scholarly papers, books etc.) to cite a stable version of a Web page (including Blogs, Wiki, PDF file, and other webdocuments), making it "citable" in an academic context. It also provides the cited author and the academic commmunity with WebCite® impact statistics. The content of the page requested below will be immediately archived, including any inline images and / or media (up to a maximum size).