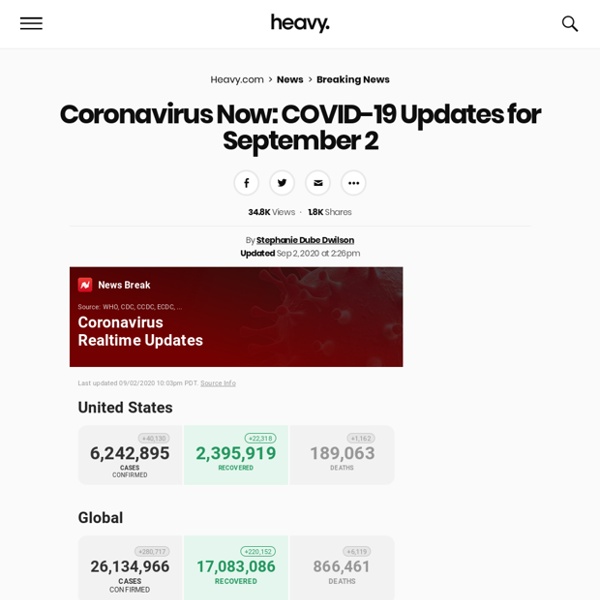 As of September 2, confirmed cases of COVID-19 now number at more than 26 million around the world, including more than 6.2 million cases in the United States and more than 188,000 U.S. deaths. You can see a breakdown of coronavirus cases throughout the world and within the U.S. on the map and chart above. Below you’ll find updates on the latest news about the coronavirus. September 2 News Updates Trump Administration & the CDC Institute a Nationwide Ban on Evictions The CDC and the Trump administration have enacted a nationwide ban on evictions that goes through December in order to help stem the COVID-19 outbreak, NPR reported. To qualify, renters must sign a declaration that they have no other options for housing and that they didn’t make more than $99,000 a year if filing individually or twice that amount if they are filing jointly. This isn’t an overall eviction ban, however, Evictions can still be given for reasons that aren’t related to not paying rent. Vaccine Updates

Whitmer Blasted After Calling Michigan AG Nessel and SOS Benson "The Best of the Best" Several social media users were not impressed when Michigan Governor Gretchen Whitmer praised State Attorney General Dana Nessel and Michigan Secretary of State Jocelyn Benson “the best of the best.” Both have recently feuded with President Trump. Whitmer wrote: It feels like the perfect moment to remind @dananessel and @JocelynBenson how grateful I am for their dedication and hard work, and how proud I am to serve our state with them. These women from Michigan are the best of the best! One Twitter user replied:

De Blasio: NYC outdoor dining plan permanent, 'year-round' New York’s dining al fresco program that was launched in the aftermath of the coronavirus pandemic lockdown will become a permanent part of New York City, Mayor Bill de Blasio announced Friday. The decision came amid mounting pressure from the City Council and the city’s struggling restaurants and bars for City Hall to release rules for outdoor dining in the winter with indoor dining likely to remain significantly limited for the foreseeable future. “In the midst of this crisis, some really good and powerful things happened. And that was particularly true in the restaurant industry,” Hizzoner told WNYC host Brian Lehrer. “We will make the Open Restaurants initiative permanent and year-round,” he added.

Barstool Sports Dave goes off on Fauci for flip-flop and interview with Julie Roberts: 'Pick a f***ing side!' Barstool Sports founder Dave Portnoy is not a fan of White House health adviser Dr. Anthony Fauci and urged him to “pick a side” in his coronavirus messages. Portnoy slammed Fauci during an interview with Fox News host Tucker Carlson, following up on criticism he unleashed on the director of the National Institute of Allergy and Infectious Diseases for flip-flopping on the appropriate response to the pandemic. (Source: Fox News) Harris Skipped COVID Relief Vote, Now Says 'Congress Needs to Act' Democrat vice presidential candidate Sen. Kamala Harris (CA) has called for Congress “to act” over COVID-19 relief for the American people after missing a vote to provide relief a few weeks ago, which her party blocked. “October rent is due one week from today,” Harris wrote in a tweet. “People all over the country are still waking up in the middle of the night worrying about how to make ends meet. It shouldn’t be like this.

Drug company execs made MILLIONS by quietly dumping stock after unveiling virus vaccine Below is a report that DML News gives a 4 OUT OF 4 STARS trustworthiness rating. We base this rating on the following criteria: Provides named sources Reported by more than one notable outlet Does not insert opinion or leading words Includes supporting video, direct statements, or photos Petition Demanding 'Nancy Pelosi is Prosecuted for COVID Violations' Goes Viral on 26th September 2020 @ 4.00pm © press A petition has gone viral across social media that is calling for Democratic House Speaker Nancy Pelosi (D-CA) to be "prosecuted by San Francisco for her flaunting of COVID regulations." The viral campaign has gathered tens of thousands of signatures in response to Speaker Pelosi being caught on camera in a hair salon without a mask earlier this month. "The salon owner gets death threats, while Pelosi has paid ZERO price for her hypocrisy," the petition states.

OpEd: HEROES Act is Nancy Pelosi’s election plot As the most reliable and balanced news aggregation service on the internet, DML News App offers the following opinion editorial written by Pete Hutchison and published by WASHINGTONEXAMINER.COM: The latest House Democratic coronavirus bill, the offensively named HEROES Act, is a cornucopia of the progressive left’s punch list for fundamentally transforming the United States. Nestled within the bill’s nearly 2,000 pages and among its $3 trillion is the “American Coronavirus/COVID-19 Election Safety and Security Act.”

Fla governor overrides local officials, orders whole state open for business, ends fines for no face masks Get the latest BPR news delivered free to your inbox daily. SIGN UP HERE CHECK OUT WeThePeople.store for best SWAG! Thanks to Republican Gov. Ron DeSantis, the state of Florida is free at last, and the “ignorant” critics who have a problem with this can pound sound. Man charged with fraud for lying about coronavirus test, forcing employer to shut plant A Georgia man faces charges after authorities say he lied to his employer that he had tested positive for COVID-19. Federal prosecutors in Atlanta said in a news release Thursday that 34-year-old Santwon Antonio Davis is charged with defrauding his employer. The Independent reports a man from Atlanta, Georgia is facing fraud charges after telling his employer he had tested positive for coronavirus while in fact uninfected – causing the plant where he worked to be shut down for cleaning and costing his employer some $100,000. Santwon Antonio Davis, who works in Atlanta at a Fortune 500 company, appeared in court this week accused of faking a dubious medical excuse letter saying he had Covid-19 – a letter that was neither signed nor written on formal letterhead, and which said he had been discharged in November 2019. Mr Davis, who has previously served three spells in jail totalling 18 months, was arrested by the FBI. He has reportedly admitted to never having tested positive.

Maryland man sentenced to a year in jail after breaking COVID rules Andrew Trunsky, DCNF A Maryland man will serve a year in prison after hosting two large house parties that violated the state’s coronavirus restrictions, according to the Charles County State Attorney’s Office. Shawn Marshall Myers, 42, was convicted of two counts of failure to comply with an emergency order, according to the state attorney’s statement. His sentence was delivered by District Court Judge W. Louis Hennessy, The Hill reported.

DOJ interested in case against Illinois gov who doesn't follow his own fiats The Department of Justice joined a lawsuit with a statement of interest contesting Illinois [totalitarian] Governor Pritzker’s overreaching COV-19 orders which extend far beyond the 30-day emergency authority granted to a governor under Illinois law. Regardless of the circumstances, actions must be lawful. A review will follow to determine the legality of Pritzker’s actions. The case was brought by Rep. Bailey: “In its statement of interest, the United States explains that this dispute belongs in Illinois state court, and that Representative Bailey has raised substantial questions as to whether the Governor’s current response to COVID-19 is lawful.

Owner of Viva Coffee takes stand against harrasmenet and threats PIMA COUNTY, AZ – Kelly Walker, owner of Viva Coffee House, is faced with being sued by Pima County over miscommunication. The county wants them to use plexiglass. Walker wants the harassment from the community that was instigated by the county to stop.