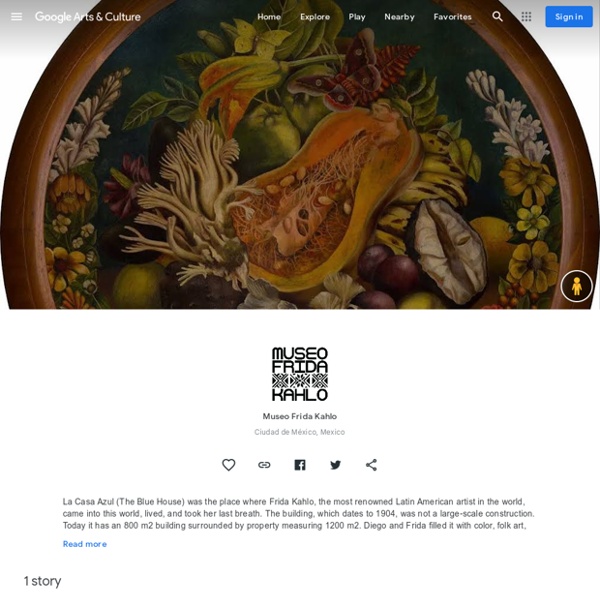 The Met 360° Project, New-York This award-winning series of six short videos invites viewers around the world to virtually visit The Met's art and architecture in a fresh, immersive way. Created using spherical 360° technology, it allows viewers to explore some of the Museum's iconic spaces as never before. Viewed more than 11 million times, this series affords an access and a perspective typically unavailable to the public. Collections - Eθνικό Αρχαιολογικό Μουσείο n The National Archaeological Museum is the largest museum in Greece and one of the most important in the world. Originally destined to receive all the 19th century excavations, mainly from Attica and other parts of the country, it gradually took the form of a central National Archaeological Museum and was enriched with finds from all parts of the Greek world. His rich collections, enumerating more than 11,000 exhibits, offer the visitor a panorama of ancient Greek culture from the prehistory to the late antiquity. The museum is housed in the imposing neoclassical building, built at the end of the 19th century in designs by L.

Jheronimus Bosch - The Garden of Earthly Delights About this project The interactive documentary Jheronimus Bosch, the Garden of Earthly Delights provides an in-depth tour though The Garden of Earthly Delights. In a web interface the visitor will be taken on an audio-visual journey, including sound, music, video and images to enrich the storytelling. Uffizi Gallery, Florence, Italy The Uffizi was designed by Giorgio Vasari in 1560 for Cosimo I de'Medici to house the Granducal Magistratures of Tuscany. Over time, the top floor loggia became an exhibition of the dynastic collection of ancient sculpture, artwork and artifacts. The eastern wing of the building incorporated the ancient Florentine church of San Pier Scheraggio and the wing to the west connected with two existing buildings, the Mint and the Loggia dei Lanzi. Vasari conceived an architectural module to be repeated all along the building: a portico flanked by two pillars, with niches on the ground floor and three windows on the upper story.

Guided Tour of The American Museum of Photography We bill ourselves as "A Museum Without Walls... For An Art Without Boundaries." Even though we have no walls, we do have "floors," separate areas for different activities. At the bottom of most pages, you'll find a navigation bar that will let you choose our Exhibitions floor, our Main Entrance floor, our Research Center or our Museum Shops.

Artists: des oeuvres d'arts classsées par artiste Far Past8000BCE2000BCE500BCE50010001500170018001850190019201940196019802000Present Google apps Alte Nationalgalerie, Staatliche Museen zu Berlin, Berlin, Germany The Alte Nationalgalerie is the original home of the Nationalgalerie, whose collections today are divided between the Neue Nationalgalerie, the Hamburger Bahnhof – Museum für Gegenwart – Berlin, the Friedrichswerdersche Kirche, Museum Berggruen and the Sammlung Scharf-Gerstenberg. The idea of establishing a cultural and educational centre across from the Berlin Palace dates back to the time of Friedrich Wilhelm IV, who dreamt of creating a "sanctuary for art and science" on the site. The basic architectural concept for the Alte Nationalgalerie – a temple-like building raised on a plinth decorated with motifs from antiquity – came from the king himself. The building was designed by Friedrich August Stüler, a student of Schinkel who also designed the Neues Museum. It was completed after Stüler’s death by another of Schinkel’s students, Johann Heinrich Strack.

Pergamon Pergamon or Pergamum, also referred to by its modern Greek form Pergamos, was a rich and powerful ancient Greek city in Mysia. It is located 26 kilometres from the modern coastline of the Aegean Sea on a promontory on the north side of the river Caicus and northwest of the modern city of Bergama, Turkey.During the Hellenistic period, it became the capital of the Kingdom of Pergamon under the Attalid dynasty in 281–133 BC, who transformed it into one of the major cultural centres of the Greek world. Many remains of its impressive monuments can still be seen and especially the outstanding masterpiece of the Pergamon Altar. Pergamon was the northernmost of the seven churches of Asia cited in the New Testament Book of Revelation.The city is centered around a 335-metre-high mesa of andesite which formed its acropolis. This mesa falls away sharply on the north, west, and east sides, but three natural terraces on the south side provide a route up to the top.

Fine Prints: Japanese, pre-1915   The Library's Prints and Photographs Division houses more than 2,500 woodblock prints and drawings by Japanese artists of the seventeenth through early twentieth centuries including Hiroshige, Kuniyoshi, Sadahide, and Yoshiiku. The Library of Congress appreciates the financial support provided by Nicihibunken (International Research Center for Japanese Studies, an Inter-University Research Institute Corporation) to scan 1,100 of the Ukiyo-e prints. Subjects frequently depicted in the prints include: Museo Reina Sofia, Madrid Founded in 1990 after originally being created as an art centre, Museo Reina Sofía is among the culminating events of the Spanish transition to democracy, recovering Pablo Picasso's Guernica as well as an outstanding representation of the international avant-gardes and neo-avant-gardes. In short, the founding of this museum means the recuperation of the experience of modernity previously missing from the Spanish context and the opportunity to try out new models of narration from a periphery that is neither lateral nor derivative, but is rather an entry way for new stories, historiographic models and artistic episodes that tip the balance of the orthodox canon of the main museums. The institution no longer considers its task to be simply the transmission of culture. Instead, it works with other agents and institutions, creating networks and alliances that strengthen the public sphere and position Museo Reina Sofía as a reference of prime importance in the geopolitical South.

Public art At the turn of the millennium, public art was an established global art genre with its own professional and critical discourse, as well as constituencies of interest and patronage independent of mainstream contemporary art. Art criticism has been prodigious regarding public art’s role in the ‘beautification’ of otherwise neglected social space or in influencing urban development. Diversity and differentiation are increasingly the hallmarks of public art worldwide, emerging from city branding strategies and destination marketing as well as from artist activism and international art events and festivals.