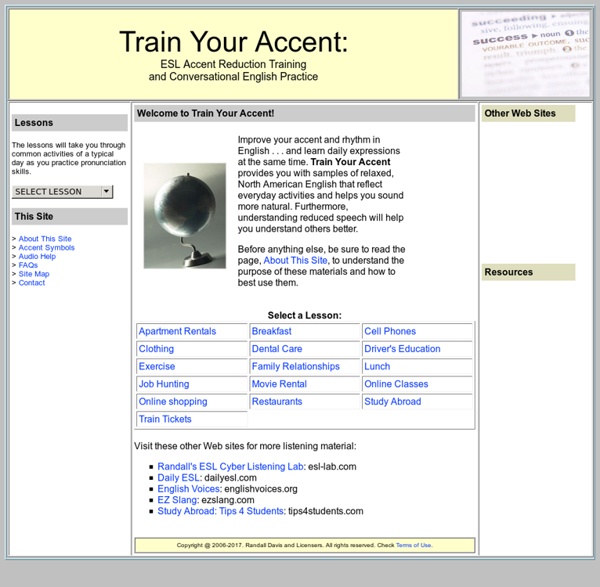 Dearest Creature - English Pronunciation Poem - Fun with English That English Pronunciation Poem! Listen to this tricky little poem and you can practise your pronunciation and listening skills, and don't worry if you don't know all the words and their different pronunciation. Even Lynne got Arkansas wrong the first time round! In fact, this was the first poem Lynne ever recorded for the site, and she's re-recorded it three times now, just to improve the quality. This will probably be the last time, unless someone buys her a recording studio.

Breaking News English Lessons: Easy English News Helping students with connected speech There is a huge difference between what our students see printed on a page and what we actually say in everyday speech. In a recording of a TESOL Spain Presentation on Youtube (well worth watching), Mark Hancock makes the following joke: Patient: Doctor, Doctor, I’ve got two theik, a near rake, sore rise, bruise darms a stummer cake and I far tall the time. Doctor: I see, perhaps you’d like to way tin the corridor? (Try reading it aloud)

Spelling - Spelling Rules If you can pronounce correctly every word in this poem, you will be speaking English better than 90% of the native English speakers in the world. After trying the verses, a Frenchman said he’d prefer six months of hard labour to reading six lines aloud. Dearest creature in creation, Study English pronunciation. I will teach you in my verse Sounds like corpse, corps, horse, and worse. I will keep you, Suzy, busy, Make your head with heat grow dizzy. Diction Exercises - Tongue Twisters to Learn How to Speak Clearly - articulation drills to make sure they get your message Why should you do diction exercises? Because your speech content may be great, you may look fantastic but unless your audience can UNDERSTAND what you're saying, your message is lost. 580Save Diction exercises will help you learn how to speak clearly. An athlete does warm-ups and stretches before an event: a singer does likewise.

Received Pronunciation Received Pronunciation, or RP for short, is the instantly recognisable accent often described as ‘typically British’. Popular terms for this accent, such as ‘The Queen’s English’, ‘Oxford English’ or ‘BBC English’ are all a little misleading. The Queen, for instance, speaks an almost unique form of English, while the English we hear at Oxford University or on the BBC is no longer restricted to one type of accent. RP is an accent, not a dialect, since all RP speakers speak Standard English.

Learning Tools - Language Pronunciation Tool The authored component is a digitally recorded question-and-answer set. The aim of this advanced tool is to ask students particular context questions such as "What time did James arrive home from the airport" for which students will have to answer orally into a microphone i.e. "James arrived home from the airport at 6:30."

Sounds Familiar? What you can hear You can listen to 71 sound recordings and over 600 short audio clips chosen from two collections of the British Library Sound Archive: the Survey of English Dialects and the Millennium Memory Bank. You’ll hear Londoners discussing marriage and working life, Welsh teenagers talking with pride about being bilingual and the Aristocracy chatting about country houses. You can explore the links between present-day Geordie and our Anglo-Saxon and Viking past or discover why Northern Irish accents are a rich blend of seventeenth century English and Scots. You can study changes in pronunciation among the middle classes or find out how British Asians express their linguistic identity.

Phonetics Resources (with Domtab) IPA Phones and Phonemes of English For the full IPA alphabet with latest revisions, visit the IPA's own home site, where more information on fonts can also be obtained. You can hear Peter Ladefoged pronounce all of the vowel and consonant symbols on the basic IPA chart. These are .aiff sound clips. For a perhaps more robust alternative link with mp3 clips, try this at the University of Victoria. Phthong for LIN100 Phthong copyright (c) 1997. Henry Rogers, Michael Stairs, and the University of Toronto. Welcome to Phthong Tongue Twisters - Peter Piper Tongue twisters are fun words games we use to challenge our pronunciation. As an English learner, you can use tongue twisters to help with pronunciation of certain sounds. Peter Piper Peter Piper picked a peck of pickled peppers. Did Peter Piper pick a peck of pickled peppers?