The Main Causes of Stress 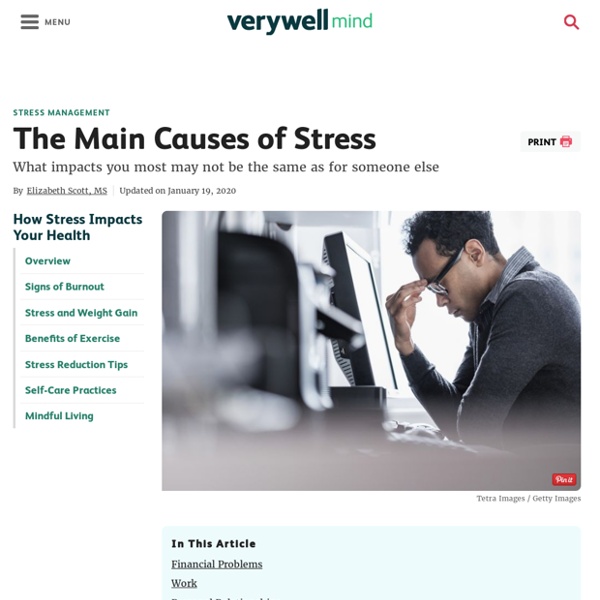 Stress is normal and, to some extent, a necessary part of life. Despite it being something everyone experiences, what causes stress can differ from person to person. For instance, one person may become angry and overwhelmed by a serious traffic jam, while another might turn up their music and consider it a mild inconvenience. A fight with a friend might follow one person around for the rest of the day, while another might easily shrug it off. What's causing you stress may already be something you're abundantly aware of. But given the importance of keeping stress in check when it comes to mitigating the effects it can have on your physical and mental health, it's worth opening yourself up to the possibility that other factors may be at play, too. Financial Problems According to the American Psychological Association (APA), money is the top cause of stress in the United States. Signs of financial stress may include: Financial stress can take months or years to dig out from. Work Parenting

Related:  Stress as a Determinant of Mental Health in Young Adults • Explosive Mummies • Stress of Working Adult • Stress Working Adults face and how to cope with it • What is stress to working adults, and how to handle stress?

Young Adults and Their Mental Health Though 31 years old is the average onset of generalized anxiety disorder (GAD), some research suggests that symptoms (including subclinical presentations in teens) may occur long before the individual seeks treatment. In addition, GAD is one of the most commonly experienced psychiatric problems in children. It is, therefore, important to understand what young people think about GAD, and more broadly, how they perceive mental health issues overall.

22 Stress Causes, Symptoms, Effects, Types, and Management Stress Definition, Picture, and FactsWhat Causes Stress? What Are the Types?What Are the Symptoms and Signs of Stress? How Does It Affect the Body? Understanding & Recognizing Stress Everyone has experienced stress. We all have demands and we all respond to those demands differently. How we respond to those demands determine our stress level.

The biggest cause of stress in America today Money continues to be the leading cause of stress for Americans, a new survey finds. Overall, stress in the United States is at a seven-year low, and average stress levels are declining, the American Psychological Association poll found. But money worries continue to nag at the American psyche, despite the ongoing economic recovery, the association says in its report released Feb. 4, titled Stress in America: Paying With Our Health. Financial worries served as a significant source of stress for 64 percent of adults in 2014, ranking higher than three other major sources of stress: work (60 percent), family responsibilities (47 percent), and health concerns (46 percent).

Are you part of the 92%? Singapore's Stress Report Posted at 05:39h in Blog by Wendy Makundi If you’re living in Singapore and have trouble sleeping at night, chances are, you’re part of these statistics. Let’s check out our stress report. Stress Report According to a Cigna 360 Well-Being Survey done in 2019, a staggering 92 per cent of working Singaporeans report feeling stressed. 8 per cent higher than the global average at 84 per cent.

Stress Symptoms, Signs, and Causes In today’s fast-paced world, chronic stress is common, but your mind and body can pay a high price. Learn to recognize overwhelming stress—and what you can do about it. What is stress? Stress is your body’s way of responding to any kind of demand or threat. When you sense danger—whether it’s real or imagined—the body’s defenses kick into high gear in a rapid, automatic process known as the “fight-or-flight” reaction or the “stress response.”

Stress symptoms: Effects on your body and behavior Stress symptoms may be affecting your health, even though you might not realize it. You may think illness is to blame for that irritating headache, your frequent insomnia or your decreased productivity at work. But stress may actually be the cause. Common effects of stress Workplace Stress - The American Institute of Stress Although the Institute is often asked to construct lists of the “most” and “least” stressful occupations, such rankings have little importance for several reasons. It is not the job but the person-environment fit that matters. Some individuals thrive in the time urgent pressure cooker of life in the fast lane, having to perform several duties at the same time and a list of things to do that would overwhelm most of us — provided they perceive that they are in control. They would be severely stressed by dull, dead-end assembly line work enjoyed by others who shun responsibility and simply want to perform a task that is well within their capabilities. The stresses that a policeman or high school teacher working in an inner city environment are subjected to are quite different than those experienced by their counterparts in rural Iowa. Stress is a highly personalized phenomenon and can vary widely even in identical situations for different reasons.

Why So Many People Are Stressed and Depressed Everywhere you look today, people are stressed out. Many reach a breaking point and sink into depression – a mental health issue few of our grandparents or great-grandparents experienced. Or is it? Perhaps people 50 or 75 years ago just didn’t talk about depression, and didn’t seek treatment for it. After all, effective treatments weren’t exactly available back then. Singapore spends $3.1 billion on stress-related illnesses annually: Study, Health News SINGAPORE - A study has found that Singapore spends about US$2.3 billion (S$3.1 billion), or 18 per cent, of its total healthcare expenditure on stress-related illnesses annually. This put the nation's proportion of expenditure on stress-related illnesses second-highest out of the nine regions studied in the report, coming just 0.8 per cent behind Australia's 18.8 per cent. The other seven regions were Hong Kong, South Korea, Taiwan, Thailand, United Arab Emirates, the United Kingdom and the United States. The report, which was produced by healthcare consultancy firm Asia Care Group on behalf of health insurance and services company Cigna, was published on Thursday (Nov 21). Globally, 84 per cent of people surveyed in past studies admitted to feeling stressed, said Cigna's regional chief executive officer Julian Mengual, while 64 per cent reported that they operated in an "always on" environment.

Who's feeling stressed? Young adults, new survey shows Stress levels for Americans have taken a decidedly downward turn across the USA — except for young adults, whose stress is higher than the national norm, says a survey to be released Thursday. Those ages 18-33 — the Millennial generation — are plenty stressed, and it's not letting up: 39% say their stress has increased in the past year; 52% say stress has kept them awake at night in the past month. And more than any other age group, they report being told by a health care provider that they have either depression or an anxiety disorder.

Coping with stress at work Everyone who has ever held a job has, at some point, felt the pressure of work-related stress. Any job can have stressful elements, even if you love what you do. In the short-term, you may experience pressure to meet a deadline or to fulfill a challenging obligation. But when work stress becomes chronic, it can be overwhelming — and harmful to both physical and emotional health. Tips to Manage Anxiety and Stress Skip to main content Conference Home Professional Education Home The Side Effects of Stress - 8 of the Most Common Medically reviewed by Carmen Fookes, BPharm Last updated on Mar 12, 2020. Depression And Anxiety Can Be Caused By Constant Stress Studies suggest that those who have difficulty in coping with stress are more likely to suffer from depression or anxiety. It is important that you seek professional help if you develop any signs of depression or anxiety. Symptoms of depression may include feelings of hopelessness, disinterest in life and thoughts of suicide. Anxiety comes in many forms and can manifest itself as panic attacks, excessive worry, chronic indigestion, insomnia, self-doubt and compulsive behaviors.