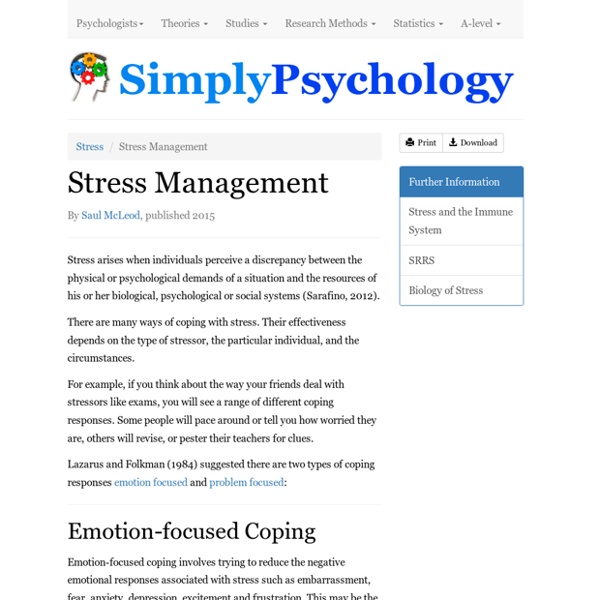 By Saul McLeod, published 2015 Stress arises when individuals perceive a discrepancy between the physical or psychological demands of a situation and the resources of his or her biological, psychological or social systems (Sarafino, 2012). There are many ways of coping with stress. Their effectiveness depends on the type of stressor, the particular individual, and the circumstances. For example, if you think about the way your friends deal with stressors like exams, you will see a range of different coping responses. Some people will pace around or tell you how worried they are, others will revise, or pester their teachers for clues. Lazarus and Folkman (1984) suggested there are two types of coping responses emotion focused and problem focused: Emotion-focused Coping Emotion-focused coping involves trying to reduce the negative emotional responses associated with stress such as embarrassment, fear, anxiety, depression, excitement and frustration. Critical Evaluation Problem-focused Coping

Related:  Understanding & Managing Stress: Working Adults • Stressing it out: Workplace edition • Effects and coping with stress in working adults • What is stress? And how teenagers and working adults can manage stress.

How does Stressors become Stress?: Cognitive Appraisal According to Richard Lazarus, stress is a two-way process; it involves the production of stressors by the environment, and the response of an individual subjected to these stressors. His conception regarding stress led to the theory of cognitive appraisal. What is Cognitive Appraisal? Lazarus stated that cognitive appraisal occurs when a person considers two major factors that majorly contribute in his response to stress. TODAYonline—The lack of stress coping programmes for working adults SINGAPORE — Singaporeans are not only sleep deprived, but they are also among the most stressed at work globally, according to a survey by health service company Cigna released on Tuesday (Mar 26). Nearly 92 per cent of Singaporeans surveyed were stressed from work, which was higher than the global average of 84 per cent. Of this group, 13 per cent said that the stress they faced was unmanageable.

Behavioral Strategies for Coping with Stress - CMC Ever wonder why it’s so hard to change a behavior? Maybe you really want to quit smoking, or drinking, or overeating and you have a long list of reasons why changing feels like an important thing to do (“I’ll be healthier”, “my wife won’t be angry at me when I come home”, “I’ll be more productive in the mornings”). And then, in spite of your best intentions, you find yourself turning back to the old behavior. There are many complex reasons why changing a long-standing behavior pattern can be hard to do. And if you are trying to change a behavioral pattern that involves drugs or alcohol, it becomes even more complicated as psychoactive substances (like nicotine, caffeine, alcohol, opiates), as well as many behaviors (sex, gambling, shopping, texting) all directly impact the reward centers of the brain.

Four Ways to Calm Your Mind in Stressful Times Life throws chaos at us on a regular basis—whether it’s our finances, our relationships, or our health. In the work world, around 50 percent of people are burned out in industries like health care, banking, and nonprofits, and employers spend $300 billion per year on workplace-related stress. This essay is adapted from Emma Seppälä's talk "Building Resilience in Times of Chaos." In response, we just keep on pushing through, surviving on adrenaline. We overschedule ourselves; we drink another coffee; we respond to one more email. The Cause of Stress: Types of Stressors By Mary Elizabeth Dean Updated November 15, 2019 Reviewer Heather Cashell Stress is a part of everyday life, but if most of us had our way, it wouldn't even exist. We hear the word stress often. People say, "I'm under so much stress!"

The Difference Between Worry, Stress and Anxiety In prehistoric times, stress was a natural response to a threat, like hearing a predator in the bushes. Today, it still prompts a behavioral response, firing up your limbic system and releasing adrenaline and cortisol, which help activate your brain and body to deal with the threat, Dr. Greenberg explained. The Basics of Stress Stress is a situation that triggers a particular biological response. When you perceive a threat or a major challenge, chemicals and hormones surge throughout your body. Stress triggers your fight-or-flight response in order to fight the stressor or run away from it. Typically, after the response occurs, your body should relax.

Under pressure at home and in school, youths battle depression SINGAPORE: Even in preschool, Jodee Kua was picked on “quite a bit” by her classmates. And it did not take much, like stealing her seat or making fun of her, to make her burst into tears. “It was easy to just push that button,” said Ms Kua, now 21. “Once, I had some chee cheong fun sauce on my face, and it became a joke to the whole class.

Related:
Related:  Understanding & Managing Stress: Working Adults   -  Stressing it out: Workplace edition   -  Effects and coping with stress in working adults   -  What is stress? And how teenagers and working adults can manage stress.