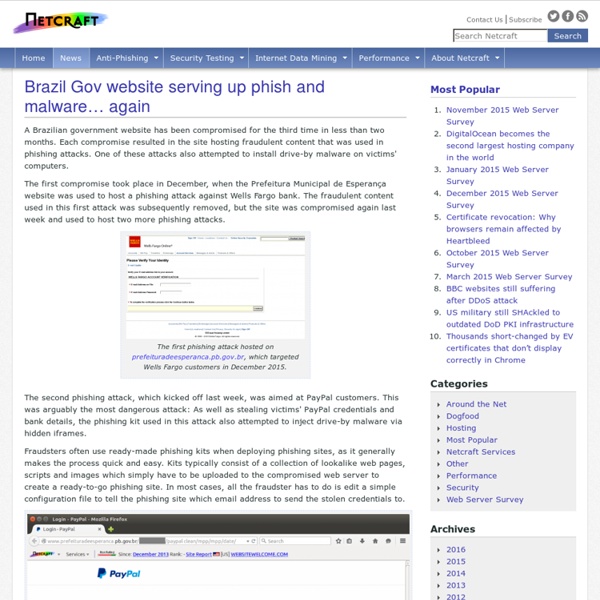 As the results of CloudFlare's challenge have demonstrated, a server's private key can be extracted using the Heartbleed vulnerability. Consequently, the 500,000+ certificates used on web servers supporting TLS heartbeat should be urgently replaced and revoked. Whilst the replacement and revocation process has begun — 80,000 certificates have been revoked since the announcement — it is far from over. Private key extraction is real CloudFlare, which uses a modified version of the nginx web server, originally thought it would be extremely hard or impossible to use the Heartbleed bug to steal a certificate's private key from an nginx server. However, this was quickly proved wrong last week after CloudFlare set up a vulnerable website and challenged people to steal its private key.

Network Monitoring Tools Les Cottrell, SLAC. Last Update: December 14, 2015 ESnet | ESCC | PinGER Internet monitoring | Tutorial This is a list of tools used for Network (both LAN and WAN) Monitoring tools and where to find out more about them. The audience is mainly network administrators. You are welcome to provide links to this web page. Seguridad Informática Background Hispasec was founded at the end of 1988 with the launching of "una-al-día" ("One-Per-Day") which is considered to be the first daily service of technical information about IT security in Spanish language. It was created by a group of specialists with the aim of divulgation of the necessity of IT security for users of new information technologies. The success obtained by "One-Per-Day" and the rest of public actions implemented by Hispasec (i.e. analysis, comparatives, new developments, etc.) originated in a practically spontaneous way a demand of service by professionals and companies. Our lab, Hispasec Sistemas, was created in year 2000 in order to attend this demand. Hispasec Sistemas is an organization of a strong technical character, is based on 100% own capital with no participation of other companies and is managed by the very founders and owners of Hispasec.

BlackHole 2.0 gives hackers stealthier ways to pwn A new version of the BlackHole exploit kit is now out on the web and ready to start infecting. The developer of the toolkit, who goes by the handle "Paunch," recently announced the availability of Blackhole 2.0, which removes much of its trove of known and patched exploits, and replaces them with a whole new crop—along with features that will make it harder for antivirus companies and site owners to detect trouble. BlackHole is a widely-used, web-based software package which includes a collection of tools to take advantage of security holes in web browsers to download viruses, botnet trojans, and other forms of nastiness to the computers of unsuspecting victims.

Documentation - Free Security Scanner For Network Exploration & Security Audits. The Nmap project tries to defy the stereotype of some open source software being poorly documented by providing a comprehensive set of documentation for installing and using Nmap. This page links to official Insecure.Org documentation, and generous contributions from other parties. The primary documentation for using Nmap is the Nmap Reference Guide. This is also the basis for the Nmap man page (nroff version of nmap.1).

Getting Started In order to make phone calls, WarVOX needs to be configured with one or more service providers. For a list of VoIP ISPs, please see the Service Providers section. To add a new provider to WarVOX, access the web interface, click the Providers link, and fill in the New Provider form. This form allows you to specify a nickname for the provider and indicate how many concurrent outbound calls can be made using this account. WarVOX can make use of multiple service providers and multiple outbound calls per provider when processing jobs. Routers and Wireless: The Dude The Dude The Dude network monitor is an application by MikroTik which can dramatically improve the way you manage your network environment. It will automatically scan all devices within specified subnets, draw and layout a map of your networks, monitor services of your devices and alert you in case some service has problems.

Unicode fun All Unicode characters in the range 0x0000-0xFFFF which have a visible glyph in Windows's Arial font. Copy-paste to build fun smileys ! ! " # $ % & ' ( ) * + , - . / 0 1 2 3 4 5 6 7 8 9 : ; < = > ? John the Ripper password cracker John the Ripper is free and Open Source software, distributed primarily in source code form. If you would rather use a commercial product tailored for your specific operating system, please consider John the Ripper Pro, which is distributed primarily in the form of "native" packages for the target operating systems and in general is meant to be easier to install and use while delivering optimal performance. This version integrates lots of contributed patches adding GPU support (OpenCL and CUDA), support for a hundred of additional hash and cipher types (including popular ones such as NTLM, raw MD5, etc., and even things such as encrypted OpenSSH private keys, ZIP and RAR archives, PDF files, etc.), as well as some optimizations and features.

World Internet population has doubled in the last 5 years Posted in Tech blog on April 19th, 2012 by Pingdom This year the number of Internet users worldwide reached 2.27 billion, almost exactly twice what it was in 5 years ago, 1.15 billion. We all know the Internet is big, but this kind of growth really puts things into perspective. The Internet population has been swelling rapidly since the arrival of the World Wide Web (which rests firmly on top of the foundation provided by the Internet). It’s human nature to get used to changes, so most of us have a tendency to forget how rapidly the world has changed, and keeps changing.

reaver-wps - Brute force attack against Wifi Protected Setup Reaver implements a brute force attack against Wifi Protected Setup (WPS) registrar PINs in order to recover WPA/WPA2 passphrases, as described in Reaver has been designed to be a robust and practical attack against WPS, and has been tested against a wide variety of access points and WPS implementations. On average Reaver will recover the target AP's plain text WPA/WPA2 passphrase in 4-10 hours, depending on the AP. In practice, it will generally take half this time to guess the correct WPS pin and recover the passphrase. Intimidated by the command-line?