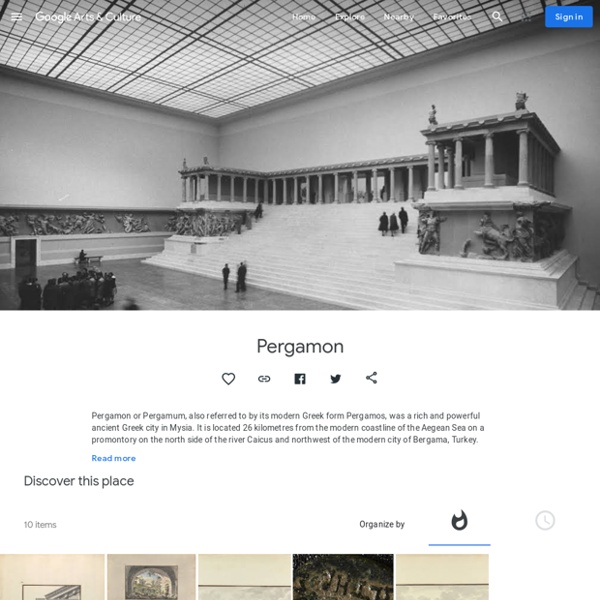 Pergamon or Pergamum, also referred to by its modern Greek form Pergamos, was a rich and powerful ancient Greek city in Mysia. It is located 26 kilometres from the modern coastline of the Aegean Sea on a promontory on the north side of the river Caicus and northwest of the modern city of Bergama, Turkey.During the Hellenistic period, it became the capital of the Kingdom of Pergamon under the Attalid dynasty in 281–133 BC, who transformed it into one of the major cultural centres of the Greek world. Many remains of its impressive monuments can still be seen and especially the outstanding masterpiece of the Pergamon Altar. Pergamon was the northernmost of the seven churches of Asia cited in the New Testament Book of Revelation.The city is centered around a 335-metre-high mesa of andesite which formed its acropolis. This mesa falls away sharply on the north, west, and east sides, but three natural terraces on the south side provide a route up to the top.

Uffizi Gallery, Florence, Italy The Uffizi was designed by Giorgio Vasari in 1560 for Cosimo I de'Medici to house the Granducal Magistratures of Tuscany. Over time, the top floor loggia became an exhibition of the dynastic collection of ancient sculpture, artwork and artifacts. The eastern wing of the building incorporated the ancient Florentine church of San Pier Scheraggio and the wing to the west connected with two existing buildings, the Mint and the Loggia dei Lanzi. Musée du quai Branly - Jacques Chirac, Paris, France In the heart of Paris's museum land, neighbouring the Louvre and the Musée d’Orsay, a few minutes from the Grand and Petit Palais, the Palais de Tokyo and the Musée d’art moderne de la Ville de Paris, the Musée du quai Branly - Jacques Chirac has an exceptional location on the banks of the River Seine, at the foot of the Eiffel Tower. The arts of Africa, Oceania, Asia, and the Americas now form part of the historical and artistic grand tour of the capital. The Musée du quai Branly - Jacques Chirac is an innovative cultural institution - museum, educational and research centre, and public living space all in one.

Alte Nationalgalerie, Staatliche Museen zu Berlin, Berlin, Allemagne — Google Arts & Culture The Alte Nationalgalerie is the original home of the Nationalgalerie, whose collections today are divided between the Neue Nationalgalerie, the Hamburger Bahnhof – Museum für Gegenwart – Berlin, the Friedrichswerdersche Kirche, Museum Berggruen and the Sammlung Scharf-Gerstenberg. The idea of establishing a cultural and educational centre across from the Berlin Palace dates back to the time of Friedrich Wilhelm IV, who dreamt of creating a "sanctuary for art and science" on the site. The basic architectural concept for the Alte Nationalgalerie – a temple-like building raised on a plinth decorated with motifs from antiquity – came from the king himself. The building was designed by Friedrich August Stüler, a student of Schinkel who also designed the Neues Museum.

National Museum of Modern and Contemporary Art, Séoul, Corée du Sud Since opening its door in 1969, the National Museum of Modern and Contemporary Art (MMCA), Korea has lived through the history of Korean art. In the process, MMCA established itself as a representative institution of Korean modern art. The museum’s four branches, including Gwacheon (opened in 1986), Deoksugung (opened in 1998), Seoul (opened in 2013), and Cheongju (expected to open in 2017), each in its own way, will continue to carry out MMCA’s commitment to the art and culture of Korea by enriching the first-hand cultural experience of the viewing public. Boasting a superb natural landscape surrounding the site, MMCA Gwacheon will be devoted to various genres of visual arts such as architecture, design, and crafts. Located within a historical site, MMCA Deoksugung will showcase modern art from Korea and overseas. In the heart of the city, MMCA Seoul will focus on introducing global contemporary art.

Musée du Prado les collections Welcome to the Museo del Prado, an institution dating back almost 200 years and one whose origins and unique nature are largely due to the collecting tastes of Spain’s 16th- and 17th-century monarchs. Collecting at that period differed from the present day. Rather than aiming at comprehensiveness, collectors aimed to assemble as many works as possible by their favourite artists. This explains why the Prado has been described as a museum of painters not of paintings, given that its artists are represented in a superlative manner with, for example, the largest holdings of Bosch, Titian, El Greco, Rubens, Velázquez and Goya, some numbering more than 100 works. This type of instinctive collecting also resulted in gaps and explains why some periods are less well represented than others, either because they were not of interest, for example the Italian Primitives, or for historical reasons, as with 17th-century Dutch painting.

Taj Mahal, India In The New Seven Wonders Of The World list Taj Mahal, a mosque-mausoleum located in Indian city of Agra, takes a very important place. In spite of its Muslim origin this white marble necropolis became an actual symbol of India. Serious security measures are taken to protect it.