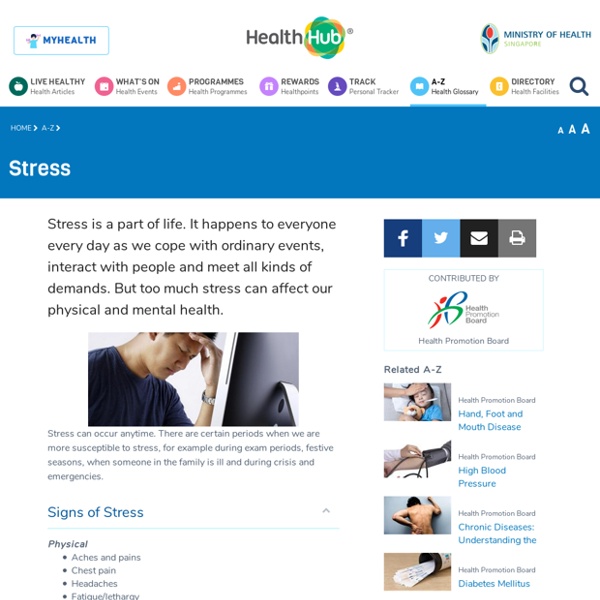 External sources of stress could include: Personal problemsWork problemsRelationship difficultiesPressure of studiesHealth problemsFinancial crisisUnemploymentLosses, e.g. bereavementUnexpected newsDaily hassles Internal sources of stress could include the following: Thinking stylesNegativity: "I'm useless, a loser, a failure."Suspicion: "Why are they so nice to me?"Social skillsShyness, unassertivenessAggressiveness, bossinessPersonality typeType A: hostile, impatient, constantly multitasking, always on the go, competitive, overly responsibleType B: laid-back, introspective, calm, easy-goingType C: calm on the outside, agitated inside; often suppresses and doesn't express feelings

Overcoming Stress Everybody has it, and everybody talks about it, but nobody really knows what stress is. WHY? It is because stress means different thing for each of us, and is also different for each of us. Manage your stress and become more productive rather than self-destructive. Stress is a part of modern living. It is unavoidable.

Signs You’re Too Stressed Out Some stress is normal, but too much of it isn’t. What are the warning signs of stress that tell us we’re overly stressed out? There’s No Avoiding Stress The Basics of Stress Stress is a situation that triggers a particular biological response. When you perceive a threat or a major challenge, chemicals and hormones surge throughout your body. Stress triggers your fight-or-flight response in order to fight the stressor or run away from it. Typically, after the response occurs, your body should relax. Too much constant stress can have negative effects on your long-term health. Is all stress bad?

Psychology Today Singapore Teens are under more stress today than ever before. Sound like an exaggeration? Despite the fact that I am often prone to hyperbole, consider this: being a teenager is not easy. Adolescence has always been a tricky developmental period defined by fundamental yet somewhat difficult changes (physical, cognitive, and social) experienced by teens as they make their way from childhood toward adulthood. These transitions trigger changes in the way the teen sees him/herself, and the way that others see and treat him or her.

10 Breathing Exercises to Try: For Stress, Training & Lung Capacity If you’re interested in trying breathing exercises to reduce stress or anxiety, or improve your lung function, we’ve got 10 different ones to sample. You may find that certain exercises appeal to you right away. Start with those so that the practice is more enjoyable. How to add breathing exercises to your day Breathing exercises don’t have to take a lot of time out of your day. 5 Tips for Helping Teens Cope with Stress The American Psychological Association (APA) recently released its Stress in America report (the full report can be found here). This year the report highlighted the stress experienced by American youth (ages 13-17) stating "high stress and ineffective coping mechanisms appear to be ingrained in our culture." Since the survey has begun, it has continued to find that American adults report higher stress levels than what they believe to be healthy.

Stress Management - Singapore Heart Foundation Stress is part and parcel of everyday life as we deal with challenges posed by work, family commitments, financial obligations, and social relationships. While a small to moderate amount of stress may actually stimulate us to perform better, excessive stress or stress which endures over a prolonged period of time can damage our health. In this context, there is growing evidence which suggests that stress has a significant impact on our risk of developing heart disease. Read more: Stress as a Risk Factor for Cardiovascular Disease Ways in which you can minimise the potentially harmful effects of stress include: Top 6 Causes of Teen Stress and Pressure Teens growing up today encounter many common sources of stress, including social, psychological, and societal pressures. As they transition from childhood to adulthood, face increasing responsibilities and decisions that can both be empowering, but also provoke much anxiety. Depending on their circumstances, some teens may be better equipped to deal with these stresses than others. That’s why both positive peer support and adult role models are very important around this age.

Singapore spends $3.1 billion on stress-related illnesses annually: Study, Health News SINGAPORE - A study has found that Singapore spends about US$2.3 billion (S$3.1 billion), or 18 per cent, of its total healthcare expenditure on stress-related illnesses annually. This put the nation's proportion of expenditure on stress-related illnesses second-highest out of the nine regions studied in the report, coming just 0.8 per cent behind Australia's 18.8 per cent. The other seven regions were Hong Kong, South Korea, Taiwan, Thailand, United Arab Emirates, the United Kingdom and the United States. The report, which was produced by healthcare consultancy firm Asia Care Group on behalf of health insurance and services company Cigna, was published on Thursday (Nov 21). Globally, 84 per cent of people surveyed in past studies admitted to feeling stressed, said Cigna's regional chief executive officer Julian Mengual, while 64 per cent reported that they operated in an "always on" environment. "Stress is a big issue...

A whopping 92% of working Singaporeans are stressed – and women are prioritising families over themselves, study finds, Business Insider - Business Insider Singapore Pexels If you’re feeling stressed at work, you’re not alone. A vast majority of working Singaporeans are under stress, and women in particular feel that it’s less manageable, a survey has found. In the 2019 Cigna 360 Well-Being Survey, a whopping 92 per cent of working Singaporeans report feeling stressed, higher than the global average of 84 per cent. Of this, 13 per cent say their stress is unmanageable, which is on par with the global average, according to the study which surveyed a total of 13,200 online interviews in 23 markets, including 502 residents in Singapore.