Stress in the Workplace 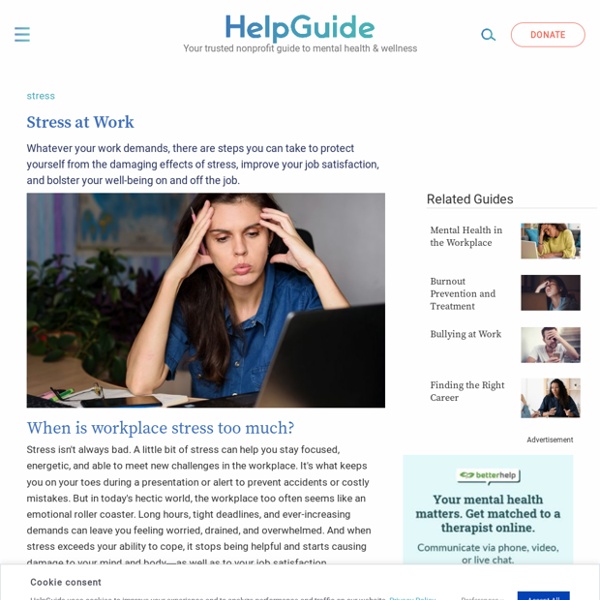 Whatever your work demands, there are steps you can take to protect yourself from the damaging effects of stress, improve your job satisfaction, and bolster your well-being on and off the job. When is workplace stress too much? Stress isn’t always bad. A little bit of stress can help you stay focused, energetic, and able to meet new challenges in the workplace. It’s what keeps you on your toes during a presentation or alert to prevent accidents or costly mistakes. But in today’s hectic world, the workplace too often seems like an emotional roller coaster. You can’t control everything in your work environment, but that doesn’t mean you’re powerless, even when you’re stuck in a difficult situation. Common causes of workplace stress include: Fear of being laid offMore overtime due to staff cutbacksPressure to perform to meet rising expectations but with no increase in job satisfactionPressure to work at optimum levels—all the time! Stress at work warning signs Turn to co-workers for support.

The Harmful Effects of Stress At Work During college, students spend about four years stressing over assignments, deadlines and adapting to new environments. As they prepare to enter the workforce, the pressure to meet academic expectations gets replaced with high career expectations and the stress continues. Although a constant state of stress has become the new norm for many working adults, the physical and mental toll is crippling their chances at success, esteemed workplace and happiness experts Annie McKee and Emma Seppälä argue in their research.

Best and Worst Ways to Cope With Stress Worst: Eat your feelings Like alcohol or drugs, food often becomes a crutch when coping with difficult times. Soothing your pain with high-calorie, high-sugar, or high-fat comfort foods feels good at first, but it can quickly spiral out of control when your mind and body begin to associate negative emotions with eating.

What Is Stress Management? Ever notice that a good laugh has a way of lightening your burdens? Or maybe you’ve experienced a scenario like one of these. Your day feels completely stressful and overwhelming, but then you coach yourself to step away from the frenzy, collect your thoughts, make a list of what’s going on– prioritizing what’s important. Coping with stress at work Everyone who has ever held a job has, at some point, felt the pressure of work-related stress. Any job can have stressful elements, even if you love what you do. In the short-term, you may experience pressure to meet a deadline or to fulfill a challenging obligation. But when work stress becomes chronic, it can be overwhelming — and harmful to both physical and emotional health. Unfortunately, such long-term stress is all too common.

TODAYonline SINGAPORE — Singaporeans are not only sleep deprived, but they are also among the most stressed at work globally, according to a survey by health service company Cigna released on Tuesday (Mar 26). Nearly 92 per cent of Singaporeans surveyed were stressed from work, which was higher than the global average of 84 per cent. Of this group, 13 per cent said that the stress they faced was unmanageable. Understanding Work Stress: Causes & Symptoms Posted September 4, 2015 | By Tricia Hussung Based on an annual survey from the American Psychological Association (APA), 60 percent of people in the United States consider their job a major source of stress. In fact, job stress ranked higher than the economy, family responsibilities and even personal health concerns. 16 Simple Ways to Relieve Stress and Anxiety Stress and anxiety are common experiences for most people. In fact, 70% of adults in the US say they feel stress or anxiety daily. Here are 16 simple ways to relieve stress and anxiety.

Management Tips - The American Institute of Stress “Stress, in addition to being itself, was also the cause of itself, and the result of itself.” – Hans Selye Just as stress is different for each of us there is no stress reduction strategy that is a panacea. Jogging and other aerobic exercises, different types of meditation, prayer, yoga and tai chi are great for many people but when arbitrarily imposed on others, prove dull, boring and stressful. There is certainly no shortage of stress relievers and in addition to the above, various progressive muscular relaxation exercises, autogenic training, deep breathing, massage therapies, visual imagery and self hypnosis practices are popular.

Burnout likely a common problem here, Singaporeans among most stressed at work globally SINGAPORE - When Ms Le Giang, 37, started a business selling Vietnamese street food in a kopitiam here nearly two years ago, she looked forward to being her own boss. The degree holder, who was previously a regional sales manager for a multinational firm, has since realised being her own boss is far from rosy. "It's extremely hard running it alone," she said. Some days, she relies on cups of coffee and cans of energy drink Red Bull to keep going. She has had to close the stall on a few occasions because she was too sick to work.

S'pore workplace stress on the rise: survey, Government & Economy Sat, Aug 27, 2016 - 5:50 AM Singapore SOME of you probably already feel that the office is a grim place. But if you want evidence of that, a survey has just confirmed that Singapore offices are stressful places. The survey "Working in Asia", by Roffey Park, has found that not only do Singapore workers spend more hours at work relative to their Hong Kong and China peers, more than half (52 per cent of Singapore workers surveyed) say their stress level has gone up over the last six months. Among Hong Kong workers, the figure is 43 per cent; among China workers, 45 per cent.