THE TRUTH BEHIND THE SCENES 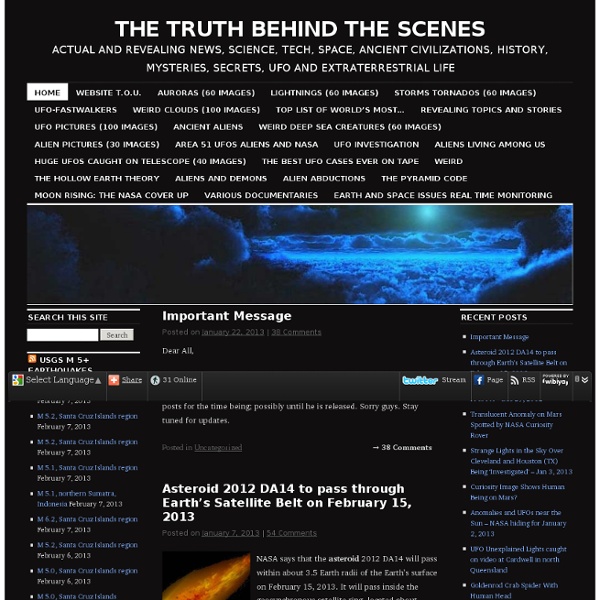 Igor Kostelac Blog Aliens ,UFO, MARS, Pole Shift, ASCENSION, HAARP, 2012, CERN 5 UFO Sightings That Even Non-Crazy People Find Creepy The Washington D.C. UFO Incident Between July 13 and 29, 1952, a series of UFO sightings were reported over Washington D.C. Witnesses would include an Air Force pilot, people on the ground and, in case you're the type to never trusts the testimony of fallible human beings, we have readings from two separate radar stations. The Unsettling Evidence: The first substantiated report came on July 19, when air traffic controller Edward Nugent, of Washington National Airport... or "Ted" to his friends. ... noticed seven unidentifiable objects on his radar. Even more interesting is that almost the exact same thing happened on July 26, only a week later. "Should I kill this?" That was enough to attract the attention of President Harry Truman. The Official Explanation: "Problem solved." - Project Blue Book We find that it's a lot easier to cover things up when you ignore the eyewitnesses. It didn't matter. It worked like a charm! The Valentich Disappearance OK, so there were a few thousand after that.

Bad Astronomy Well now, this is an interesting discovery: astronomers have found what looks like a "super-Earth" – a planet more massive than Earth but still smaller than a gas giant – orbiting a nearby star at the right distance to have liquid water on it! Given that, it might – might – be Earthlike. This is pretty cool news. Now let me be clear: this is a planet candidate; it has not yet been confirmed. The star is called HD 40307, and it’s a bit over 40 light years away (pretty close in galactic standards, but I wouldn’t want to walk there). Massive planets tug on their star harder, so they’re easier to find this way. In this case, HD 40307 was originally observed a little while back by HARPS, and three planets were found. We don’t know how big the planet is, unfortunately. But the very interesting thing is that it orbits the star at a distance of about 90 million kilometers (55 million miles) – closer to its star than is is to the Sun… but that’s good! Image credits: ESO/M. Related Posts:

theintelhub Planet X and 2012: The Pole Shift (Magnetic) Explained and Debunked « Exposing PseudoAstronomy Introduction Continuing my series on Planet X and 2012, one of the main claims of what will actually happen is termed a “Pole Shift.” Sounds scary, huh? But what does it actually mean? All posts in this series: Earth’s Magnetic Field Most people have either seen in-person or in video a crane in a junkyard that, instead of a hook at one end, has a large metal plate. Induced magnetic fields are created by electricity moving in circles. Earth’s magnetic field is called a “magnetic dynamo” because it is produced by liquid metals moving around in Earth’s core. Earth’s magnetic field is in the form of a “dipole,” meaning that it has a “North” and “South,” or “positive” and “negative” side to it, much like a bar magnet. Polar Wander In 2001, Earth’s north magnetic pole was at coordinates 81.3° N by 110.8° W. But, how could that happen? In a word: No. Earth’s magnetic poles appear to wander throughout time, and not just due to the continents drifting. What Happens When the Field Shifts? Like this:

10 More Mysterious Conspiracy Theories Mysteries To date we have around seven conspiracy theory lists or lists containing entries related to such. This new list is a welcome addition as it has been some time since our last one and they are always extremely fascinating topics to read about. Theories surrounding the Ararat Anomaly arose from a single black and white photograph taken in 1949 by a USAF recon plane performing routine intelligence gathering of the Ararat massif, which was in an area of military interest at the time. Conspiracy theorists, many of them Biblical literalists, claim that the odd-looking object if Noah’s Ark, which the Bible states “came to rest on the mountains of Ararat” after the Great Flood. The anomaly appears to be a very rounded elongation teetering on the edge of a slope, buried under ice and snow, and it has so roused the curiosity of the U. A close-up of it appears to show two sets of three “prongs,” one set on each end, and this close-up does look very man-made. Suppression of The Cathars

Simple Questions with No Answers | Open Science Questions by Natalie Wolchover | September 13, 2012 03:28pm ET Credit: Public domain Ask a physicist about the radius of the black hole at the center of the galaxy and she'll tell you more than you wanted to know.