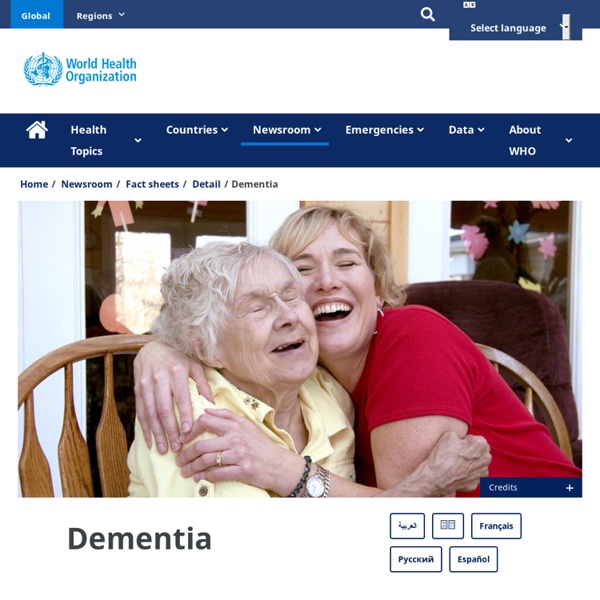 Dementia is a syndrome – usually of a chronic or progressive nature – in which there is deterioration in cognitive function (i.e. the ability to process thought) beyond what might be expected from normal ageing. It affects memory, thinking, orientation, comprehension, calculation, learning capacity, language, and judgement. Consciousness is not affected. The impairment in cognitive function is commonly accompanied, and occasionally preceded, by deterioration in emotional control, social behaviour, or motivation. Dementia results from a variety of diseases and injuries that primarily or secondarily affect the brain, such as Alzheimer's disease or stroke. Dementia is one of the major causes of disability and dependency among older people worldwide. Signs and symptoms Dementia affects each person in a different way, depending upon the impact of the disease and the person’s personality before becoming ill. forgetfulnesslosing track of the time becoming lost in familiar places. Human rights

The Best Brain Games for Seniors By Donna McHugh, Regional Director, Community Partnerships on Jan 2, 2019 11:55:56 AM As you age, you may find yourself or someone you love becoming a bit more forgetful, or maybe you keep misplacing things. While frequent forgetfulness or severe memory loss may be a sign of Alzheimer’s disease, some forgetfulness is a normal part of aging. While it’s not preventable, there are things you can do to slow down the brain aging process. Keeping your brain active, much like your body, is very important at all times of life. By solving brain games and puzzles, you’re working out your brain and reducing your brain age.

About dementia If you're becoming increasingly forgetful, particularly if you're over the age of 65, it may be a good idea to talk to your GP about the early signs of dementia. As you get older, you may find that memory loss becomes a problem. It's normal for your memory to be affected by stress, tiredness, or certain illnesses and medications. This can be annoying if it happens occasionally, but if it's affecting your daily life or is worrying you or someone you know, you should seek help from your GP. But dementia isn't just about memory loss. It can also affect the way you speak, think, feel and behave. Relaxation Techniques for Stress Relief To effectively combat stress, you need to activate your body’s natural relaxation response. Techniques such as deep breathing, visualization, meditation, and yoga can help. Finding the best relaxation technique for you For many of us, relaxation means flopping on the couch and zoning out in front of the TV at the end of a stressful day. But this does little to reduce the damaging effects of stress. Rather, you need to activate your body’s natural relaxation response, a state of deep rest that puts the brakes on stress, slows your breathing and heart rate, lowers your blood pressure, and brings your body and mind back into balance.

Dementia - Symptoms, Causes, Diagnosis, Treatments Dementia is a general term for loss of memory, language, problem-solving and other thinking abilities that are severe enough to interfere with daily life. Alzheimer's is the most common cause of dementia. Subscribe to our e-newsletter to learn how you can help those affected by Alzheimer's. About dementia Dementia is not a single disease; it’s an overall term — like heart disease — that covers a wide range of specific medical conditions, including Alzheimer’s disease. Disorders grouped under the general term “dementia” are caused by abnormal brain changes.

When should I be worried about my cognitive abilities decline? Refer to the table in this webpage to have a brief guide on what are some of the normal age-related cognitive abilities decline Scientists used to think that brain connections developed at a rapid pace in the first few years of life, until you reached your mental peak in your early 20s. Your cognitive abilities would level off at around middle age, and then start to gradually decline. We now know this is not true. Instead, scientists now see the brain as continuously changing and developing across the entire life span. There is no period in life when the brain and its functions just hold steady. Using photo‐elicitation to explore the lived experience of informal caregivers of individuals living with dementia Background Dementia is defined as the deterioration of cognitive function beyond that which is expected (World Health Organisation, 2017). It is estimated that 850,000 people are living with dementia in the United Kingdom, and this figure is expected to increase to one million by 2025 (Alzheimer's Society, 2014). Furthermore, it is proposed that the total health and social care costs for dementia almost match the combined costs of cancer, heart disease, and stroke (Alzheimer's Disease International, 2014). Despite the large health care costs associated with dementia care, those living with dementia, and their families, cover two‐thirds of this cost (Alzheimer's Society, 2014). Informal caregiving is defined as unpaid care provided by a relative or friend (Bremer et al., 2015).

Caregiver Stress - How to prevent burnout and deal with fatigue? -SeniorCare – Singapore's Most Reliable Online Elderly Store Caretakers in Singapore face a tough and daunting tasks. Not only do they have to shoulder the physical work of taking care, they also face huge mental challenges in facing numerous problems in Singapore. You may become a caregiver (or caretaker) as your parents or elder relatives start to age, and their physical, mental and emotional state gradually changes. It is a challenging part of our lives not just for the elderly but for the other family members as they started to learn how to be caregivers and take on new chores in the family. What is Alzheimer's Disease? Symptoms & Causes Alzheimer's disease is a type of dementia that causes problems with memory, thinking and behavior. Symptoms usually develop slowly and get worse over time, becoming severe enough to interfere with daily tasks. Subscribe to our e-newsletter to learn how you can help those affected by Alzheimer's. Understanding Alzheimer's and dementia Alzheimer's is the most common cause of dementia, a general term for memory loss and other cognitive abilities serious enough to interfere with daily life.

Staying active through different ways! There are many things you can do to help yourself age well: exercise and be physically active, make healthy food choices, and don’t smoke. But did you know that participating in activities you enjoy may also help support healthy aging? As people get older, they often find themselves spending more and more time at home alone. The isolation can lead to depression and is not good for your health. If you find yourself spending a lot of time alone, try adding a volunteer or social activity to your routine. Living With Dementia: A Meta-synthesis of Qualitative Research on the Lived Experience We use cookies to enhance your experience on our website.By continuing to use our website, you are agreeing to our use of cookies. You can change your cookie settings at any time. <a href=" Find out more</a> Skip to Main Content

Worry About Caregiving Performance: A Confirmatory Factor Analysis Introduction Dementia is a disease that is frequently associated with significant caregiving burden. One of the most widely used instruments to quantify caregiving burden is the Zarit Burden Interview (ZBI) (1). The ZBI has been validated in different populations and has been shown to be invariant across different educational levels and gender (2). The degree of caregiving burden has traditionally been assessed using pre-defined cutoffs on the ZBI total score, essentially constituting a unidimensional approach (3, 4). Subsequent studies have since pointed toward caregiving burden as a multidimensional construct.

This resource explains more about what dementia is and its effects. In relevance with our topic, this resource talks about how dementia can cause decline in cognitive abilities such as memory, thinking, learning capacity and judgement. It also highlights symptoms of dementia in various stages so that individuals can monitor themselves or their loved ones based on these symptoms. One significant highlight of this resource is the information under "Treatment and care". Under that section, it is mentioned that "optimizing physical health, cognition, activity and well-being" is one of the ways to fulfill dementia care. This brings us to our main purpose of this resource centre, which is to show why it is important for older adults to remain active to maintain their cognitive abilities. by ginnong Apr 15