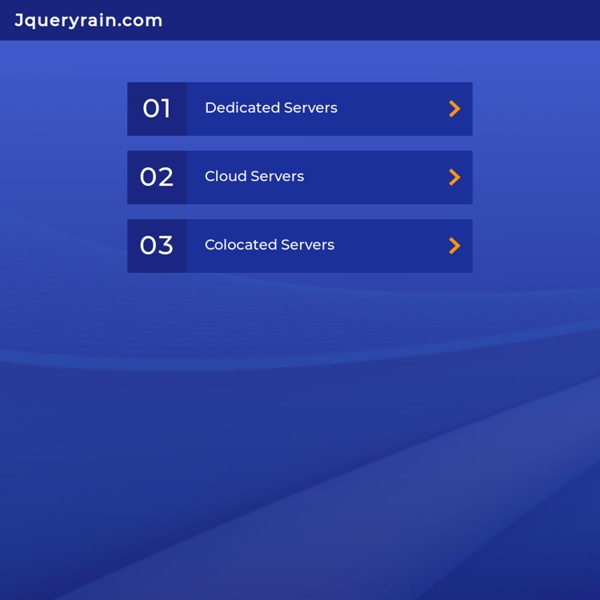 jQuery effects, 150+ best for web developers and designers Since the arrival of the jQuery library, the life of JavaScript programmers have gotten a lot easier because now it’s simpler to develop web 2.0 applications. With jQuery, the programmers can keep their code organized and concise, which is the major slogan of the library, “write less, do more”. You can utilize jQuery to handle events, generate animations, and even add an Ajax support into your web applications in a very easy way.

Tooltipster - The jQuery Tooltip Plugin Styling your tooltips with a custom look ⇑ Tooltipster makes it very easy to go from one of the packaged themes and customize a few properties of your choice. To do so, we recommend that you create a so-called "secondary theme" which will override some properties of a packaged theme. 3.1.1 Released! jQuery 3.1.1 is now available! This release includes some bug fixes and improvements. As with all patch version releases, there are no new features or intended compatibility issues (if upgrading from jQuery 3.0+) in this release. We fixed a selector issue with disabled options, exposed jQuery.noConflict even when jQuery is loaded with AMD, and fixed some issues concerning whitespace. We also fixed an issue with the map file that will help when using CDN copies during debugging.

Parallax Gallery In this tutorial, you will learn how to make a Flash parallax scrolling gallery from scratch. Parallax scrolling is frequently used in most 2D animation and games, where the background images and foreground images scroll at different rate of speed. This will create an illusion of depth as the background images are moving slower than the foreground images. View Demo Gallery Download Demo ZIP Coding High density retina displays or screens, like Apple’s Retina Display, have lots of pixels in a small space that it is almost impossible see the pixelation, thus, displaying smoother images and texts. Although Apple offered it first on the market, manufacturers have been releasing similar devices recently to compete with Apple. When using Retina Display devices, you can see that other sites online appear blurry. This is because of the low-resolution images being stretched to fill the screen that makes the site look disgusting. A Retina Display scales 1px to 2px, making the size double. Read More

Typography Article Archive As a designer, either working with a design firm or on a freelance basis, you probably know a lot about stress. From deadlines to redesigns, client relations to cash flow — it is part of everyday life for someone working as a designer in any capacity. But did you know your typography could also be stressed? Just like in your life, type has certain pressure points, and there are good and bad types of type stress. In today’s article, we’re going to delve into this concept in a little more details. We’ll walk you through exactly what types of typographical stress there are, how you can ensure it doesn’t affect the readability of your designs.

CSS Typography: Examples and Tools In the previous part of this series, we discussed some techniques and best practices for CSS typography. Let’s now delve into the subject further by looking into some case studies, tools, as well as a showcase of excellent CSS typography on the web. This is the third part of a three-part series of guides on CSS typography that will cover everything from basic syntax to best practices and tools related to CSS typography. Case Studies on CSS Typography Tutorials and theories can be great, but nothing says proof like a case study. Here are a handful of studies that can provide you with some real-world insights regarding typography on the web.