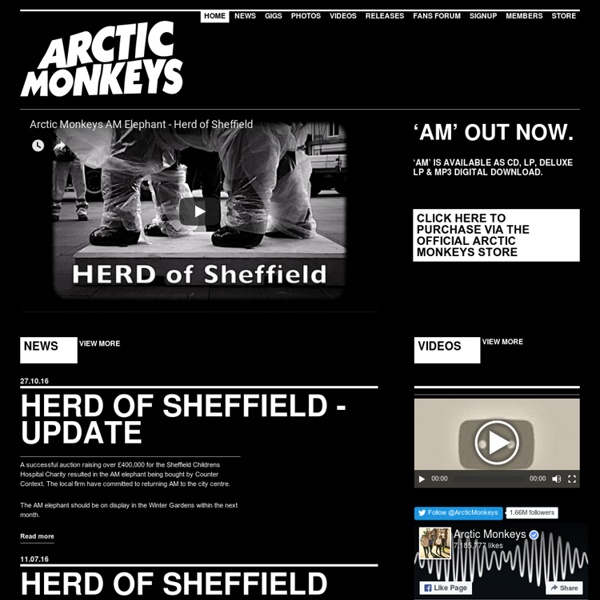 Artists | Arctic Monkeys The band’s initials, a new morning, an analogue radio frequency and an existential statement - the title of Arctic Monkeys’ fifth album AM suggests all of those things and more. And the record itself lives up to this pithily resonant billing by being, in drummer Matt Helders’ typically forthright estimation, “the album we’ve always been waiting to make”. It starts with a sumptuously squelchy synthetic-sounding beat. So AM’‘s opening moments eschew the queasy camaraderie of the ersatz hoedown in favour of a tautly compressed human pulse? “I like the way it feels dead wooden”, chimes in Matt Helders, in the unabashedly earth-bound spirit of drummers from time immemorial. And since meticulous sonics are no use without tunes, AM has those in clubs. Alex Turner’s reputation as a phrase-maker has been assured since the headlong rush of Arctic Monkeys’ early singles drove them to the fastest selling debut album of any British band in history. “If someone asks ‘Is this the West Coast record?’

Marea. Why It's The Perfect Time For Alex Turner And Miles Kane To Revive The Last Shadow Puppets What a pair of teases. Since the release of The Last Shadow Puppets' debut album 'The Age Of The Understatement' back in 2008, Alex Turner and Miles Kane have spent the interim years dangling the carrot of a follow-up but never quite coming through with the goods. In 2009, Kane said the pair were looking to record music that year, while in 2010 he confirmed that they would start recording again after he'd wrapped up his solo record. With hope diminishing, it looked like we could anything from six months, six years to a lifetime away from LSP Mk II. Though 'The Age Of The Understatement' contained many sonic traits now familiar to both – the sweeping, orchestral balladry that would manifest itself in Turner's solo EP 'Submarine’; the retro '60s fixation of Kane's solo work; Turner's effortlessly lyrical turns of phrase – there was something in the alchemy between the two that set it apart. While both Miles and Alex have a bit of downtime, now seems like the perfect moment for Album Two.

Rihanna Alex Turner: His 35 Greatest Lyrics So Far Over the last decade, Alex Turner has proven himself to be one of Britain's finest lyrical wordsmiths. Here's 35 examples of the Monkey mainman's best work. "Great escape lost track of time and space/ She's a silver lining climbing on my desire" "What came first the chicken or the dickhead?" "Does it help you stay up late / Does it help you concentrate / Does it tune you in / When you chew your chin" "Flicking through a little book of sex tips / Remember when the boys were all electric?" "Didn't you see she were gorgeous, she was beyond belief / But this lad at the side drinking his Smirnoff ice / Came and paid for her Tropical Reef" "It sort of feels like I'm running out of time/ I haven't found all I was hoping to find / You said you got to be up in the morning, going to have an early night / And you're starting to bore me, baby, why'd you only call me when you're high?" "Now then Mardy Bum / I've seen your frown / And it's like looking down the barrel of a gun" Share This

Sean Bean - The Mighty Bean - The Mighty Bean Famous family trees: Sean Bean | News 22 July, 2013 Welcome to the latest blog in our ‘famous family trees’ series. In this blog series, experienced family historian, Roy Stockdill, investigates the family histories of the famous, both living and dead. Sean Bean is the subject of Roy’s powers of deduction this month. In the noughties, Sean Bean has been most closely associated with fantasy TV series and films like Game of Thrones, the Lord of the Rings trilogy, Percy Jackson & the Lightning Thief, Mirror Mirror and Silent Hill: Sean Bean Revelation. Beginning the journey My research into Sean Bean’s direct male line ancestry produced no hint in his background that he would ever become an actor, nor did I turn up any controversial ancestors unless you count a great-great-great-grandfather who went bankrupt in the 1860s and who may have ended his days in an asylum. The Bean family on the 1911 census A decade earlier in 1901, the Bean family were at 68 Edward Road, Attercliffe cum Darnall. Links outside of Yorkshire Roy Stockdill

Does Sean Bean Really Die More Than Other Actors? One does not simply… assume. Actor Sean Bean has been dying over and over again for 20 years. He’s been dropped from a satellite dish in Goldeneye, shot through the neck with a grappling hook in The Island, peppered with arrows in The Lord of the Rings, and decapitated in Game of Thrones. Start looking at the numbers, and many leading actors have died at least a few times. I crafted the following chart to find out: Click to enlarge! It looks like the “walking spoiler” meme has a grain of truth to it. However, even though Bean has perfected his “I’m dying” face, he still hasn’t died the most on screen. But the top honor of most on-screen deaths goes to wonderful character actor John Hurt. Maybe it should be #DontKillJohnHurt. So is Sean Bean a walking spoiler alert? Of course, Bean has indeed racked up a large number of deaths early on in his career, relatively speaking (he has made far fewer films compared to Lugosi, Price, and Hurt).