The best apps. Better together. 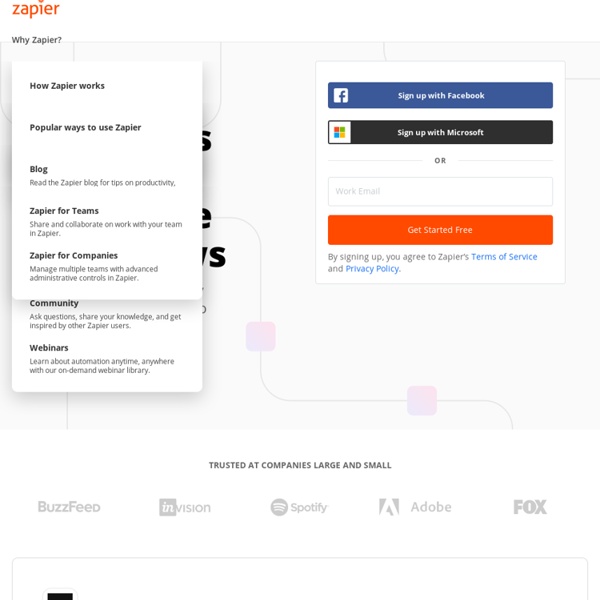 Microsoft Office E1 vs E3 vs E5 Microsoft Office 365 comes in three different flavours for the Enterprise: E1, E3, and E5. With each successive level, you get more – but what is included, exactly? In writing this comparison, I did a lot of research. The result was more than just this article: I also created a tool that can generate a recommendation for you based on your response to a short questionnaire. It will generate a score for each of the seven different versions of Office 365, plus provide a few other things to think about. You can try it out here. fastcoexist If you dial 112 in Stockholm—the European equivalent of 911—and report a heart attack victim, it won't take long for an ambulance to show up. But a volunteer might to get there first. A new app uses GPS to ping anyone from a network of thousands of CPR-trained "lifesavers" who happens to be in the neighborhood. "In short, every second counts," says Rasmus Sellberg, strategy director for Daytona, the Swedish digital agency that worked with medical researchers to develop the app. "Bystander CPR dramatically increases survival rates.

Cage Match Greg Jackson, the single most successful trainer in the multi-billion-dollar sport of professional mixed martial arts fighting, works out of a musty old gym in Albuquerque, New Mexico, not far from the base of the Sandia Mountains. On a recent morning, the 38-year-old Jackson, who has the cauliflowered ears and bulbous nose of a career fighter, watched two of his students square off inside the chain-link walls of a blood-splattered ring called the Octagon. One of them was Jon Jones, the light heavyweight champion of the Ultimate Fighting Championship (UFC), the premier MMA league. In four weeks, Jones would be defending his title against Rashad Evans, an expert fighter and his former training partner. To prepare him, Jackson had set up a sparring session with Shawn "The Savage" Jordan, a heavyset fighter from Baton Rouge.

Comparing Microsoft Office 365 F1 vs E1 Licensing Plans for Firstline Workers - Interlink Cloud Blog Firstline Workers – a workforce comprised of over 2 billion employees including retail sales associates, hospitality staff, medical workers and teams on the manufacturing floor - are often the first and only representation of your brand with your customers. To help transform and empower this workforce, Microsoft Office 365 offers two specific licensing plans that were designed to foster culture, collaboration, and teamwork through technology enablement at a much lower cost per user. The first plan is the Office 365 F1 licensing plan (a replacement to the K1 Kiosk plan). It was created for deskless workers – users who are often working away from a desk or using a shared PC and don’t need desktop versions of Office.

We Love Lean – Lean startups, design, happiness and everything in between For those of you that don’t know I’m co-founder of Spook Studio. We’re a startup consultancy and design studio by the sea that helps startups get started. We’ve worked with many startups over the years and have learnt a bit along the way. We love working with startups as we get to see an idea come to life, plus also we get to work with visionary people that are looking to disrupt the status quo and do something different. Not just dreamers, but dreamers that do. As well as organising Lean Startup Brighton we also put on a couple of events in London aimed at startups.

The Principles of VBD Revisited Want to Dominate your League? Then Dominate your Draft. This article will show you how to do this with the draft system that serious Fantasy Owners across the country use. It's called Value Based Drafting or VBD. Why listen to us about it? Because we are the guys that started it. Create a recognition-rich culture from Microsoft Teams Here at Bonusly, we’re huge advocates for integrating with chat and collaboration tools. There are so many products available to support various parts of your work that we’re no strangers to tool fatigue. It can be hard to remember to use them all for their intended purpose!

The Most Innovative UX Of The Year, In 18 Projects What's the recipe for a great product? That's the billion dollar question that designers may spend their whole lives chasing. And the most nebulous ingredient, user experience, is also the most important. UX extends to a remarkably diverse range of products. It might involve a prosthetic arm for kids that also lets them tinker and learn, all while turning themselves into superheroes. What a Big-Data Business Model Looks Like - R “Ray” Wang by R “Ray” Wang | 10:00 AM December 6, 2012 The rise of big data is an exciting — if in some cases scary — development for business. Together with the complementary technology forces of social, mobile, the cloud, and unified communications, big data brings countless new opportunities for learning about customers and their wants and needs. It also brings the potential for disruption, and realignment. Organizations that truly embrace big data can create new opportunities for strategic differentiation in this era of engagement.

The Modern Workplace: Mastering Communication and Collaboration Workforces are more distributed than ever. Many modern employees work remotely from their homes, co-working spaces, and coffee shops. Others work on the go, regularly traveling between different cities and offices. Coworkers are frequently located in different places, keep different office schedules, and often see each other intermittently. Distributed workplaces demand an updated way of thinking about communication and collaboration. In this article, we’ll take a look at the modern workplace, sharing within teams, communication technology, and how to encourage collaboration.