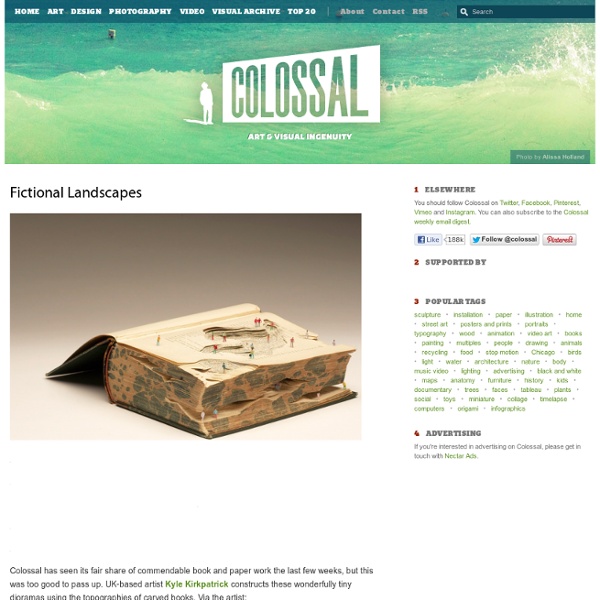 Colossal has seen its fair share of commendable book and paper work the last few weeks, but this was too good to pass up. UK-based artist Kyle Kirkpatrick constructs these wonderfully tiny dioramas using the topographies of carved books. Via the artist: My practice is primarily concerned with the notion of the imagined landscape. I don’t know about you but given the right disposable book (blasphemy!)

‘How To Vacuum Form’ at Aram Bartholl track byDanny Dive Thru I am very pleased to finally publish this new project I’ve been working on the last couple months (def. not a Speed Project ;) It was premiered last week at my solo show opening ‘Reply All’ at [DAM] Berlin. If you are in town drop by, check out the show and make your own mask! ‘Reply All’ Solo show: Aram Bartholl, January 28 – 10th March 10 2012 [DAM] Berlin, Neue Jakobstr. 6/7, 10179 Berlin Materials: polysterol 1-1,5 mm, 23 x 33 cmplasterhose, hose connectorsclampsvacuum hand pump, (camping supply)toasterwooden board, rodsstop watchoriginal, prototype or master mask to make copies from Tutorial: positive plaster cast from maskadditional plaster modeling (chin and forehead) optionalnegative plaster cast from model to obtain master moldinclude hose, hose connector and holes for decompression in the casttoaster parts rearranged to heating board, mounted on standheat 1mm polysterol approx. 2 min in 6cm distanceand keep pumping !!

Wild Animals World by Fumiaki Kawahata You're reading a free preview. Pages 4 to 17 are not shown in this preview. You're reading a free preview. The Million Dollar Homepage Poster $22,500 worth of pixels! 21 years old and facing a monster overdraft: it’s typical. We’ve all done it, haven’t we? Linny counts her ad revenue Measuring 60cm x 60cm and in full glorious colour, every detail is visible in this poster’s high-gloss finish – and the story itself has a finish that can’t be beat either. The tale began in August 2005, when Alex Tew decided one evening that he needed to solve his financial problems fast. ...another $22,500 slice of internet history! The idea was, like all the good ‘uns, awesomely simple. Four months later, the page had made a whopping $990,000. The story has become written in Internet legend and appeared in every paper and blog around the world – now you can own a piece yourself by getting hold of this awesome poster version of the finished page, absolutely exclusive to Firebox.

Tumblr Office Tour Daniel Goodman / Business Insider Here is the office of Tumblr, the super fast growing blogging platform that may be inspiring Facebook and has big plans for the future. We had to see where the magic happens. The Tumblr office is on E 21 St. and that building in the background is actually home to Business Insider. Tumblr splits its office between two floors. Of course, a big logo on entry. There is a book case on entry and the home of their 11-year-old Pomeranian Tommy. Once you get into the back there is a pretty good view of the whole office. There are balloons at each section of desks. Andrew Greene, 29, from New Jersey, is a Product Engineer at Tumblr and is working on improving the spam filters. Next we head over to the big hanging dice. The designers sit here and they have another great view of the office. Zack Sultan, 26, from Berkeley, CA, is using a cool pad for a mouse and for drawing designs. These Tumblr mugs are all around the office. So we head to the unicorn. Inside the fridge.

3D Laser Cut Paper Art by Eric Standley Apr 23, 2013 Eric Standley is an artist and educator currently living and working in Virginia. In his incredible series of 3D laser cut paper art, Standley’s work is found at the intersection of art, technology, history and mathematics. His vector drawings were initially inspired by the geometry in Gothic and Islamic architectural ornamentation. The pieces are painstakingly assembled from laser-cut paper, layered to create elaborate 3-D works of art. Standley uses an array of colors woven together with mathematical precision to create his art, combining 12th century architectural aesthetics with contemporary technology. His cut-paper drawings have appeared in more than 40 exhibitions over the past few years. [via anticafard, Katie Gehrt @ Virginia Tech] An Interview with Artist Eric Standley If you enjoyed this post, the Sifter highly recommends: