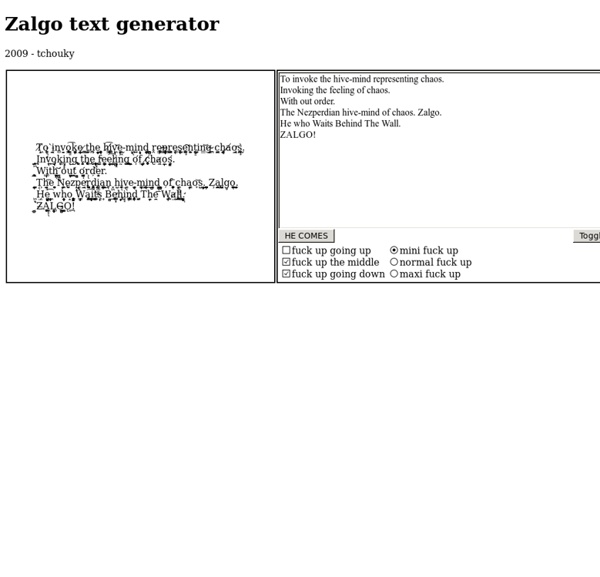 Quick Story Idea Generator Stories The theme of this story: dark quest. The main characters: unbalanced hero and humble secret agent. The Next America By Paul Taylor Published April 10, 2014 Two Dramas in Slow Motion Demographic transformations are dramas in slow motion. Create Your Own Smartphone App With Infinite Monkeys – No Coding Knowledge Required It would be great if we all had the time, skills, and patience to learn computer coding, especially since technology pervades so many areas of our life. But thankfully, there are applications and web developers out there who provide ways for the rest of us to produce apps with little or no coding skills. Back in June, I reviewed one such web application called Buzztouch, which is designed to allow anyone to create their own smartphone application.

Things That Are Considered Rude In Japan With its baroque rituals and ancient traditions, Japanese etiquette strikes fear in the hearts of even seasoned travelers. But no need to worry: It’s effort—not execution—that matters most to the Japanese. “Everybody understands you’re from a different culture,” says Yuko Ehara, a Tokyo-based tour guide and etiquette expert. “If you make a sincere effort to learn, we are appreciative and forgiving of mistakes.” Now, the Palace Hotel Tokyo has launched Cultivating Tokyo, a series of private etiquette seminars to help business and leisure guests avoid faux pas (81-3- 3211-5211; two-hour lessons from about $170).

Wind Map An invisible, ancient source of energy surrounds us—energy that powered the first explorations of the world, and that may be a key to the future. This map shows you the delicate tracery of wind flowing over the US. The wind map is a personal art project, not associated with any company. We've done our best to make this as accurate as possible, but can't make any guarantees about the correctness of the data or our software.

Extreme Street View: Google Employee Maps Deserted Island Extreme Street View: Google Employee Maps Deserted Island Article by Urbanist, filed under Urbex & Parkour in the Global category. Street View has mapped much more than roads in its, but sending a lone urban explorer through the haunting multistory ruins of a remote island may be one of their riskiest geographic ventures yet. Strapped with panoramic photography equipment, this video shows a lone Google employee crawling through rubble, scaling partially caved-in abandonments and standing on precarious roofs, all to document one of the most unique deserted cities on the globe. Occupied for over a century, and briefly the world’s most densely-populated island, Gunkanjima, Japan (aka Hashima) is now one of the loneliest places on the planet. Side trivia: if it looks familiar, you may be remembering it from scenes of Skyfall, the James Bond film.

Generators / Image Makers Instant Logo Generator We introduce our Instant Logo Maker. This new logo generator is our most fully featured logo generator to date. Select from hundreds of design and customize the logo to suite your needs. You can do things like change the font, change the font and image colors, resize the font and logo image, rotate the text, plus a long list of other custom changes. Create a custom logo for your site, blog or business today.