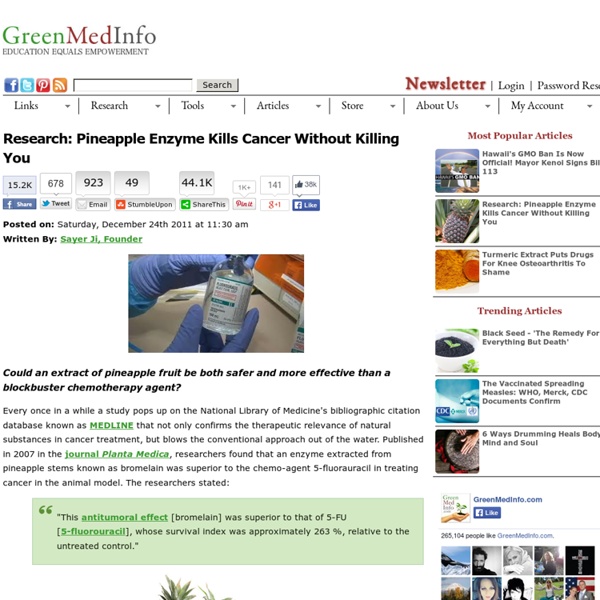 Could an extract of pineapple fruit be both safer and more effective than a blockbuster chemotherapy agent? Every once in a while a study pops up on the National Library of Medicine's bibliographic citation database known as MEDLINE that not only confirms the therapeutic relevance of natural substances in cancer treatment, but blows the conventional approach out of the water. Published in 2007 in the journal Planta Medica, researchers found that an enzyme extracted from pineapple stems known as bromelain was superior to the chemo-agent 5-fluorauracil in treating cancer in the animal model. The researchers stated: "This antitumoral effect [bromelain] was superior to that of 5-FU [5-fluorouracil], whose survival index was approximately 263 %, relative to the untreated control." The material safety data sheet (MSDS) for 5-FU states: The dose at which 50% of the animals given the drug die is 115mg/kg, or the equivalent of 7.8 grams for a 150 lb adult human. Related:  Healthful Living

72 Page Document Shows Merck Paid Doctors at Least $18,810,495.52 Merck pays big money to doctors for speaking about their products. Sometimes gems are difficult to come by. However, when we find them, just clean them up a bit and we can appreciate their ‘real value’. The little treasure I discovered was a document located on Merck Pharmaceutical’s website. The 72-page document is titled, “Merck & Co., Inc., Disclosure of Payments to U.S. Keep in mind that, that amount is just for speaking fees! You may be wondering why this information was made available. Merck said it was because of transparency. It’s a good start, but apparently the reports were going to be available annually thereafter (July 1, 2009). Document Shows Heavy Vaccine Promotion Have you ever wondered why some doctors may be so rabidly in favor of promoting vaccines? Not only is it subtle, it’s legal and has financial rewards. For example, Merck was pushing two new vaccines: Gardasil and Rotateq. Let’s do something mathematically radical. But what does this all mean? ‘Rotten to the Core’

The 21st Floor » Blog Archive » Skeptic News: Burzynski petition Home » Featured , news , Scepticism , Science 25 November 2011 3 Comments By Keir Liddle There has been a recent flurry of interest in the activities of the Burzynski clinic among skeptics triggered by an article in the Observer where another family tragically affected by a rare cancer has turned to fundraising to pay for treatment at the controversial Texas facility. While it is impossible not to feel for those confronted with the grim spectre of cancers for which medical science has not yet found an effective treatment or cure it is equally as hard to witness the false hope that can arise from those offering treatments based on flimsy premises and with an absence of peer reviewed studies and independent replication. Stories like this appear in the media from time to time . Someone working for the clinic has recently taken it upon themselves to threaten skeptical bloggers who criticise the practices of the clinic and it’s research. The petition can be found here . Like this: Like Loading...

The Top 10 Healthiest Seeds on Earth by John Summerly, They come in all different sizes, shapes and colours. The seed is an embryonic plant itself and the origin of nutrition. A plant goes to great lengths to produce each seed and fill it with high concentrations of vitamins, minerals, proteins, essential oils and dormant enzymes. If you’re looking for a high quality, nutritious and filling snack, seeds are tough to beat. Let’s look at the ten healthiest seeds on Earth and how to consume them. A seed is life. How to Eat Seeds There is only one way to derive nutrition from seeds and that is to eat them raw. - Choose raw and unsalted seeds - Avoid coated or roasted seeds - Avoid sugar coated seeds The 10 Healthiest Seeds on Earth Serving Size = 1 Tsp The seeds are loaded with vitamins and minerals, are an excellent source of fibre, protein and antioxidants, and are the richest plant source of omega-3 fatty acids. The seeds are gluten-free, which also makes them appealing to people with celiac disease or an aversion to gluten.

Dr. Burzynski and the cult of personality of the "brave maverick cancer doctor" : Respectful Insolence I thought I’d be leaving the topic of Dr. Stanislaw Burzysnki and his combination of Personalized Cancer Therapy for Dummies-level “personalized, gene-targeted cancer therapy” coupled with his “cancer-curing” antineoplastons, which have morphed into an orphan HDAC inhibitor used off-label as part of his pricey everything-but-the-kitchen-sink” combination of targeted therapies and old-fashioned chemotherapy. After all I figured that there would probably be nothing new to say before sometime in January, when he is schedule to appear before the Texas Medical Board to answer for his dubious medicine again, the first time since the 1990s. Then I saw this story from the U.K Oh, no. I need your Help to fight my Brain Cancer”We desperately need to raise £130,000 for Chiane. As Elton John and Bernie Taupin would say, I’ve seen that movie, too. But I do not condone. What Dr. Dr. It is not my intention or desire to crush the hope of such families. There’s another aspect about Dr.

Allopathic medicine Allopathic medicine is an expression commonly used by homeopaths and proponents of other forms of alternative medicine to refer to mainstream medical use of pharmacologically active agents or physical interventions to treat or suppress symptoms or pathophysiologic processes of diseases or conditions.[1] The expression was coined in 1810 by the creator of homeopathy, Samuel Hahnemann (1755–1843).[2] In such circles, the expression "allopathic medicine" is still used to refer to "the broad category of medical practice that is sometimes called Western medicine, biomedicine, evidence-based medicine, or modern medicine" (see the article on scientific medicine).[3] Etymology[edit] Allopathic medicine and allopathy (from the Greek prefix ἄλλος, állos, "other", "different" + the suffix πάϑος, páthos, "suffering") are terms coined in the early 19th century[4] by Samuel Hahnemann,[2][5] the founder of homeopathy, as a synonym for mainstream medicine. History[edit] Current[edit] References[edit]

The Many Benefits of Asparagus (NaturalNews) Asparagus is a springtime vegetable that is versatile and uniquely delicious. Buying it this time of year is best as it is fresh and particularly nutritious, since it is in season. Studies show that asparagus balances insulin levels, which means that it powerfully prevents diabetes. Ensuring that our insulin levels are stable is one of the most important things we can do for our health. Asparagus is also a powerful aphrodisiac and one of the best foods to increase libido. Asparagus is also one of the only vegetables to contain inulin, which feeds friendly bacteria that live in the large intestine. Asparagus contains loads of folate. Here are some other benefits that make asparagus one of the best super foods on the planet. * Great for your heart * Asparagus fights depression and puts you in a good mood * Gets rid of warts by eating one of the best super foods on the planet! * Asparagus lowers cholesterol * Stimulates milk production in nursing mothers * Helps with treating HIV

Loving This Planet: Fluoride Detox: Ousted as Poison, Here’s How to Get it Out of Your System Experts have been warning for years against the dangers of sodium fluoride, but recently more awareness has spread than ever before. Following the rampant success of essential news stories centered around fluoride, including a story I authored just three short days ago highlighting the horrendous amount of sodium fluoride in doctor recommended toothpaste (500,000% higher than fluoridated water), it’s now important to discuss how to actually get it out of your system through fluoride detox. Even if you somehow managed to escape the ingestion of fluoridated water in your younger years, chances are you’ve been exposed to food items that actually can contain about 180 times the sodium fluoride content as fluoridated water according to fluoride expert Jeff Green. This has to do with how what’s known as aluminum fluoride, or Cryolite. In an interview with Dr. “Cryolite is actually sodium aluminum fluoride… This sodium aluminum fluoride is especially effective at killing bugs,” Green says.

Chemotherapy doesn’t work? Not so fast… I’ve lost count of how many times I’ve come across statements like the ones above, often in all caps, quite frequently with more than one exclamation point, on the websites of “natural healers,” purveyors of “alternative medicine.” In fact, if you Google “chemotherapy doesn’t work,” “chemotherapy is poison,” or “chemotherapy kills,” you’ll get thousands upon thousands of hits. In the case of “chemotherapy kills,” Google will even start autofilling it to read “chemotherapy kills more than it saves.” The vast majority of the hits from these searches usually come from websites hostile to science-based medicine. Here’s another example, entitled The truth about chemotherapy and the cancer industry: Note how Adams portrays screening for cancer and chemotherapy as a deadly scam designed solely to enrich the “cancer industry” as it kills patients. As my final example, there’s this cartoon: There is not a single cancer patient that has ever been cured by chemotherapy. In other words, to Dr. Wow!

Whitaker Wellness Institute 5 powerful health benefits of asparagus you probably didn’t know One of the first foods that signals the start of spring is the appearance of fresh asparagus at local farmers’ markets and grocery stores. Just as spring is a time of new beginnings, asparagus is one of those veggies that I love to experiment with during this time of year. Recipes to Try:Lemony Asparagus Pasta and 19 More Dinners with Fresh Asparagus Asparagus with Curry Butter & More Simple Asparagus Side Dishes And just as a spear is used as a weapon, asparagus’s javelin-shaped form could be viewed as symbolic for its age- and disease-fighting abilities. Asparagus is just packed with health benefits: It’s loaded with nutrients: Asparagus is a very good source of fiber, folate, vitamins A, C, E and K, as well as chromium, a trace mineral that enhances the ability of insulin to transport glucose from the bloodstream into cells. Don’t Miss: Why Asparagus Is One of 15 Foods You Don’t Need to Buy Organic Roast, grill or stir-fry your asparagus. Here’s an easy recipe to try: Makes 1 1/2 cups