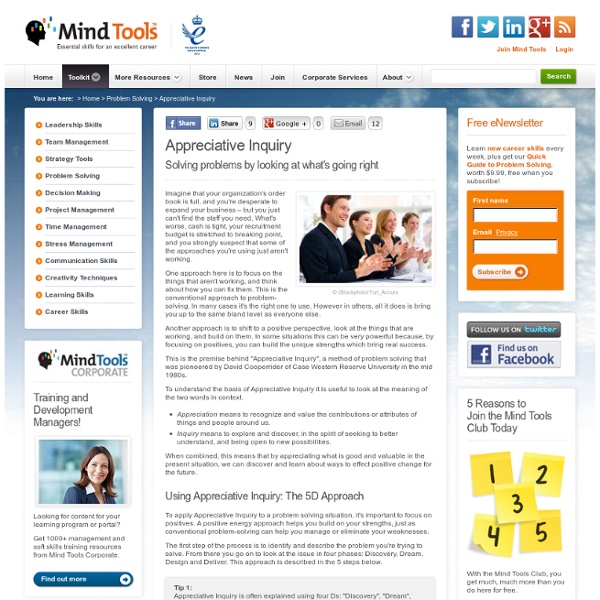 Solving Problems by Looking at What's Going Right © iStockphoto/Yuri_Accurs Imagine that your organization's order book is full, and you're desperate to expand your business – but you just can't find the staff you need. What's worse, cash is tight, your recruitment budget is stretched to breaking point, and you strongly suspect that some of the approaches you're using just aren't working. One approach here is to focus on the things that aren't working, and think about how you can fix them. Another approach is to shift to a positive perspective, look at the things that are working, and build on them. This is the premise behind "Appreciative Inquiry", a method of problem solving that was pioneered by David Cooperrider of Case Western Reserve University in the mid 1980s. To understand the basis of Appreciative Inquiry it is useful to look at the meaning of the two words in context. Appreciation means to recognize and value the contributions or attributes of things and people around us. Tip 1: Related:  Underpinning Theories

Appreciative Inquiry - What is Appreciative Inquiry? Appreciative inquiry According to Gervase R. Bushe[1] (2013) "Appreciative Inquiry (AI) is a method for studying and changing social systems (groups, organizations, communities) that advocates collective inquiry into the best of what is in order to imagine what could be, followed by collective design of a desired future state that is compelling and thus, does not require the use of incentives, coercion or persuasion for planned change to occur." Developed and extended since the mid 1980s primarily by students and faculty of the Department of Organizational Behavior at Case Western Reserve University, AI revolutionized the field of organization development and was a precursor to the rise of positive organization studies and the strengths based movement in American management." Basis and Principles[edit] The Appreciative Inquiry model is based on the assumption that the questions we ask will tend to focus our attention in a particular direction. Instead of asking “What’s the problem?” Implementing AI[edit]

The 4-D Cycle How does the 4-D process work? An Appreciative Inquiry typically goes through the following four stages: Discover - Appreciating and valuing the best of What Is. Information and stories are gathered about what is working well. Dream - Envisioning What Might Be. Design - Determining What Should Be. Deliver (or Destiny) - Innovating What Will Be. So what does this look like in practice? Appreciative Inquiry principles and practices are adapted and customized to each individual situation. The full process typically includes: Select a focus area or topic(s) of interest.

30 Social Media Predictions for 2012 From the Pros How will social media impact businesses in 2012? We sought expert opinions from a wide range of pros you’re likely familiar with. We are grateful for the dozens of social media professionals who have written over 600 articles for us since we started Social Media Examiner in October 2009. To give you a glimpse of what we can expect in the next 12 months, we decided to tap their knowledge and expertise. #1: Businesses consolidate social media activities Michael Stelzner @mike_stelzner As the social media landscape becomes more crowded in 2012, businesses will pick their battles and dig in. The old mantra of “be everywhere” will quickly be replaced with “be where it matters to our business.” The major four players have all gone through massive changes in preparation for the battle for users. Have you picked your battle? Michael Stelzner, founder and CEO of Social Media Examiner. #2: Photo and video social networks will blossom Jay Baer @JayBaer Photo- and video-based social interaction will grow.

Change Management Blog: Change Model 1: The 4D Model (Appreciative Inquiry) Background: The 4-D Model is based on Appreciative Inquiry (AI) which is a larger framework for human or organizational change. Like AI itself, it is based on a shift in paradigms on human interaction. The core can be captured in the idea that we create the world as we describe it. If many people in an organization think that this is a torture chamber, they will feel physical pain when they enter the door of this organization. If the same people think this is a great place to work, it will be. Alana Karran writes about the difference between problem and outcome orientation approaches:The other primary orientation is the Outcome Orientation, also known as the Collaborative-Creating Orientation. Creators of the Model:Suresh Srivastva, Ron Fry, and David Cooperrider, 1990 Phases of the Change Process: (taken from new-paradigm.co.uk)Discover—people talk to one another, often via structured interviews, to discover the times when the organisation is at its best. Applicability: Strengths:

How to Write a Feasibility Study | Together Works Why do I need a feasibility study?A feasibility study is a formalised, written approach to evaluating your idea and can help you identify: if your idea is viable or notuseful facts and figures to aid decision-makingalternative approaches and solutions to putting your idea into practice There are many reasons why new community ventures fail, but lack of planning and research is the main one. As you plan, your knowledge of your market, customers and the environment in which you will work will grow. You'll also find out obstacles to your idea as well as solutions to deal with them! What does a feasibility study involve? It can involve some or all of the following: Who undertakes such studies? Commissioning a feasibility study may seem pointless if you are confident that your idea is a sound one, but a decision made without thorough research can be costly. This can be broken down into several sections:a) Executive Summary - the main purpose is to gain the reader's attention. 1.

Theories of Motivation Author: Jim Riley Last updated: Sunday 23 September, 2012 There are a number of different views as to what motivates workers. The most commonly held views or theories are discussed below and have been developed over the last 100 years or so. Unfortunately these theories do not all reach the same conclusions! Taylor Frederick Winslow Taylor (1856 – 1917) put forward the idea that workers are motivated mainly by pay. Workers do not naturally enjoy work and so need close supervision and control Therefore managers should break down production into a series of small tasks Workers should then be given appropriate training and tools so they can work as efficiently as possible on one set task. Workers are then paid according to the number of items they produce in a set period of time- piece-rate pay. As a result workers are encouraged to work hard and maximise their productivity. Mayo Mayo conducted a series of experiments at the Hawthorne factory of the Western Electric Company in Chicago Maslow

employee motivation, motivational and inspirational quotes for sales and business staff home » leadership/management » motivational theory employee motivation theory - team building activities, workshops, inspirational quotes, and the power of positive experience Alignment of aims, purpose and values between staff, teams and organization is the most fundamental aspect of motivation. The better the alignment and personal association with organizational aims, the better the platform for motivation. Where people find it difficult to align and associate with the organizational aims, then most motivational ideas and activities will have a reduced level of success. Motivation is a complex area. Erik Erikson's life stage theory is useful for understanding people's different motivational needs according to life stage. Nudge theory is a powerful change-management concept which emerged in the early 2000s. Motivational receptiveness and potential in everyone changes from day to day, from situation to situation. ice-breakers and warm-ups for motivation building confidence for motivation