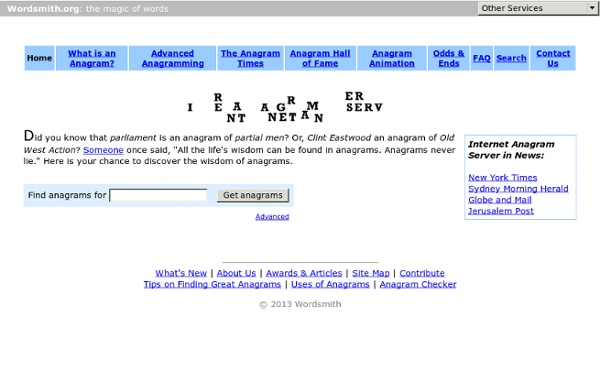 Internet Anagram Server in News:New York TimesSydney Morning HeraldGlobe and MailJerusalem Post Did you know that parliament is an anagram of partial men? Or, Clint Eastwood an anagram of Old West Action? Someone once said, "All the life's wisdom can be found in anagrams. Anagrams never lie." Here is your chance to discover the wisdom of anagrams. What's New | About Us | Awards & Articles | Site Map | ContributeTips on Finding Great Anagrams | Uses of Anagrams | Anagram Checker© 2014 Wordsmith

English Proverbs Nothing defines a culture as distinctly as its language, and the element of language that best encapsulates a society's values and beliefs is its proverbs. The graphic to the right shows the words that are used in English proverbs, with the size of each word indicating how often it occurs (click for a bigger image). It's interesting to note that the two most common words in English proverbs are 'good' and 'never'. A bit of armchair psychology leads to the conclusion that, if proverbs really do reflect belief, then the English are (or at least were when these proverbs were coined) inclined to be virtuous but negative - not so far from the truth perhaps?

The 100 Most Beautiful Words in English ere are the 100 most beautiful words in English. How do we know we have the most beautiful? They were chosen by Robert Beard, who has been making dictionaries, creating word lists, and writing poetry for 40 years. For five years he wrote the Word of the Day at yourDictionary.com and since 2004 he has written up 1500 words in the series, So, What's the Good Word? Curvy in HTML5 Curvy is a HTML5 puzzle game using the canvas element. Just rotate the tiles so that like colors connect. Modernizr tells me you don't have canvas support in your browser. Sadly, this game uses technology that's only in browsers with HTML5 support. We've tested Chrome 12, Firefox 4 and Opera 11. Presented to you by FlamingLunchbox is a puzzle, originally for Android phones, using a simple idea.

Punctuation Why do we need punctuation? Punctuation marks are essential when you are writing. They show the reader where sentences start and finish and if they are used properly they make your writing easy to understand. Etymologically Speaking... From the old Arabic word "hashshshin," which meant, "someone who is addicted to hash," that is, marijuana. Originally refered to a group of warriors who would smoke up before battle. Aaron White adds: You may want to explore the fact that the hashshshins were somewhat of a voodoo-ized grand conspiracy scapegoat cult (the very fact of their existence is impossible to confirm). They supposedly were a secret society (a la the FreeMasons) which was influential in every middle eastern court from Persia to Bangladesh.

Unusual Words Unusual Words A by no means exhaustive list of rare, obscure, strange and sometimes funny words and their meanings that only seem to crop up in crosswords and dictionaries. Words that are used so seldom, you wonder who invented them and why. Home ~ The Stories ~ Diversions ~ Links ~ Contact Translation Tips This page was written for our translators to give them tips how to translate. Translations can be a rewarding profession, because you can learn interesting things while translating interesting documents, learn how many companies, products and services operate while translating documents about them, and you often have the freedom to work when you want and in your own environment. Table of Contents Creating a Comfortable Working Environment Setting up Your Computer Monitor