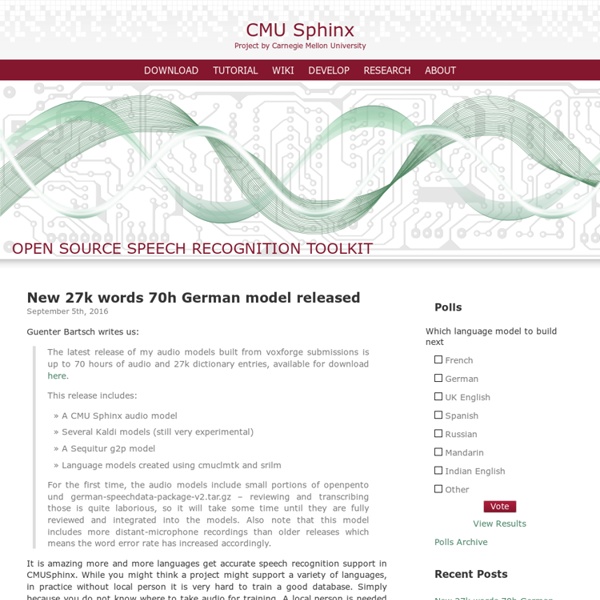 Published on April 8, 2014 Personal assistants are hot these days. Open source personal assistant is a dream for many developers. Recently released Jasper makes it really easy to install personal assistant on Raspberry Pi and use it for custom voice commands, information retrieval and so on. Jasper is written in Python and can be extended through the API. More importantly, Jasper uses CMUSphinx for offline speech recognition, so much waited capability for assistant developers.

Later Terminator: We’re Nowhere Near Artificial Brains I can feel it in the air, so thick I can taste it. Can you? It’s the we’re-going-to-build-an-artificial-brain-at-any-moment feeling. It’s exuded into the atmosphere from news media plumes (“IBM Aims to Build Artificial Human Brain Within 10 Years”) and science-fiction movie fountains…and also from science research itself, including projects like Blue Brain and IBM’s SyNAPSE. For example, here’s a recent press release about the latter: Tutorial - ros-pocketsphinx-speech-recognition-tutorial - One-sentence summary of this page. - ROS pocketsphinx speech recognition tutorial ROS/Pocketsphinx Speech Recognition Tutorial Part 1) Install sfml audio from SFML (simple and fast multimedia library) is a C++ API that provides you low and high level access to graphics, input, audio, etc. We will use this as our wav file player. This is the same mechanism utilized by Garratt Gallagher from his kinect piano play demo. I have modified the wav playing section of Garratt’s code so that it can be invoked on the command line and takes the path to any wav file as an easy mechanism for playing wav files.

CMU Sphinx CMU Sphinx, also called Sphinx in short, is the general term to describe a group of speech recognition systems developed at Carnegie Mellon University. These include a series of speech recognizers (Sphinx 2 - 4) and an acoustic model trainer (SphinxTrain). In 2000, the Sphinx group at Carnegie Mellon committed to open source several speech recognizer components, including Sphinx 2 and later Sphinx 3 (in 2001). The speech decoders come with acoustic models and sample applications. The available resources include in addition software for acoustic model training, Language model compilation and a public-domain pronunciation dictionary, cmudict.

Plivo Framework Braina - Artificial Intelligence Software for Windows Braina (Brain Artificial) is an intelligent personal assistant software for Windows PC that allows you to interact with your computer using voice commands in English language. Braina makes it possible for you to control your computer using natural language commands and makes your life easier. Braina is not an average Siri or Cortana clone for PC. It isn't like a chat-bot, its priority is to be super functional and to help you in doing tasks. You can either type commands or speak to it and Braina will understand what you want to do.

IBM simulates 530 billon neurons, 100 trillion synapses on supercomputer A network of neurosynaptic cores derived from long-distance wiring in the monkey brain: Neuro-synaptic cores are locally clustered into brain-inspired regions, and each core is represented as an individual point along the ring. Arcs are drawn from a source core to a destination core with an edge color defined by the color assigned to the source core. (Credit: IBM) Announced in 2008, DARPA’s SyNAPSE program calls for developing electronic neuromorphic (brain-simulation) machine technology that scales to biological levels, using a cognitive computing architecture with 1010 neurons (10 billion) and 1014 synapses (100 trillion, based on estimates of the number of synapses in the human brain) to develop electronic neuromorphic machine technology that scales to biological levels.” Simulating 10 billion neurons and 100 trillion synapses on most powerful supercomputer Neurosynaptic core (credit: IBM)

2600hz I The Future of Cloud Telecom Q-learning Q-learning is a model-free reinforcement learning technique. Specifically, Q-learning can be used to find an optimal action-selection policy for any given (finite) Markov decision process (MDP). It works by learning an action-value function that ultimately gives the expected utility of taking a given action in a given state and following the optimal policy thereafter.

Model Suggests Link between Intelligence and Entropy +Enlarge image A. Wissner-Gross/Harvard Univ. & MIT A. Mathematicians help to unlock brain function Mathematicians from Queen Mary, University of London will bring researchers one-step closer to understanding how the structure of the brain relates to its function in two recently published studies. Publishing in Physical Review Letters the researchers from the Complex Networks group at Queen Mary's School of Mathematics describe how different areas in the brain can have an association despite a lack of direct interaction. The team, in collaboration with researchers in Barcelona, Pamplona and Paris, combined two different human brain networks - one that maps all the physical connections among brain areas known as the backbone network, and another that reports the activity of different regions as blood flow changes, known as the functional network. They showed that the presence of symmetrical neurons within the backbone network might be responsible for the synchronised activity of physically distant brain regions.