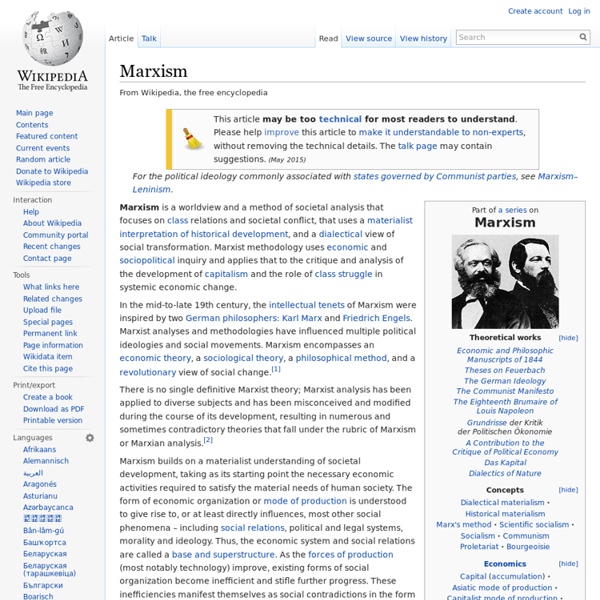 Marxism is a worldview and a method of societal analysis that focuses on class relations and societal conflict, that uses a materialist interpretation of historical development, and a dialectical view of social transformation. Marxist methodology uses economic and sociopolitical inquiry and applies that to the critique and analysis of the development of capitalism and the role of class struggle in systemic economic change. In the mid-to-late 19th century, the intellectual tenets of Marxism were inspired by two German philosophers: Karl Marx and Friedrich Engels. There is no single definitive Marxist theory; Marxist analysis has been applied to diverse subjects and has been misconceived and modified during the course of its development, resulting in numerous and sometimes contradictory theories that fall under the rubric of Marxism or Marxian analysis.[2] Marxism has developed into different branches and schools of thought. Overview Concepts Historical Materialism Criticism of capitalism V. Related:  ingalogina060885 • the Bloomsbury Set

Chartism Chartism was a working-class movement for political reform in Britain which existed from 1838 to 1858. It took its name from the People's Charter of 1838 and was a national protest movement, with particular strongholds of support in the north of England, the east Midlands, the Potteries, the Black Country and south Wales. Support for the movement was at its highest in 1839, 1842 and 1848 when petitions signed by millions of working people were presented to the House of Commons. The strategy employed was to use the scale of support which these petitions and the accompanying mass meetings demonstrated to put pressure on politicians to concede manhood suffrage. Chartism thus relied on constitutional methods to secure its aims, though there were some who became involved in insurrectionary activities, notably in south Wales and Yorkshire. The People's Charter called for six reforms to make the political system more democratic: Origin[edit] Press[edit] People's Charter of 1838[edit] 1842[edit]

Teratology A grown steer with five legs. Teratology is the study of abnormalities of physiological development. It is often thought of as the study of human congenital abnormalities, but it is much broader than that, taking in other non-birth developmental stages, including puberty; and other non-human life forms, including plants. The related term developmental toxicity includes all manifestations of abnormal development by toxic substances. These may include growth retardation, delayed mental development or other congenital disorders without any structural malformations.[1] Etymology[edit] The term stems from the Greek τέρας teras (genitive τέρατος teratos), meaning 'monster' or 'marvel', and λόγος logos, meaning 'the word' or, more loosely, 'the study of'.[2] As early as the 17th century, teratology referred to a discourse on prodigies and marvels of anything so extraordinary as to seem abnormal. Mammalia[edit] Teratogenesis[edit] Humans[edit] Causes[edit] Other animals[edit] Fossil record[edit]

Friedrich Engels German communist political theorist Friedrich Engels ( ENG-(g)əlz;[2][3][4] German: [ˈfʁiːdʁɪç ˈʔɛŋl̩s]; sometimes anglicised Frederick Engels; 28 November 1820 – 5 August 1895) was a German philosopher, historian, communist, social scientist, sociologist, journalist and businessman.[5] His father was an owner of large textile factories in Salford, England and in Barmen, Prussia (what is now in Wuppertal, Germany). Engels developed what is now known as Marxist theory together with Karl Marx and in 1845 he published The Condition of the Working Class in England, based on personal observations and research in English cities. In 1848, Engels co-authored The Communist Manifesto with Marx and also authored and co-authored (primarily with Marx) many other works. Engels died in London on 5 August 1895, at the age of 74 of laryngeal cancer and following cremation his ashes were scattered off Beachy Head, near Eastbourne. Biography[edit] Early years[edit] Manchester[edit] Paris[edit] Brussels[edit]

New Historicism A critical approach developed in the 1980s through the works of Michel Foucault and Stephen Greenblatt, similar to Marxism. Moving away from text-centered schools of criticism such as New Criticism, New Historicism reopened the interpretation of literature to the social, political, and historical milieu that produced it. To a New Historicist, literature is not the record of a single mind, but the end product of a particular cultural moment. New Historicists look at literature alongside other cultural products of a particular historical period to illustrate how concepts, attitudes, and ideologies operated across a broader cultural spectrum that is not exclusively literary. In addition to analyzing the impact of historical context and ideology, New Historicists also acknowledge that their own criticism contains biases that derive from their historical position and ideology. Because it is impossible to escape one’s own “historicity,” the meaning of a text is fluid, not fixed.

Owenism Owenism is the utopian socialist philosophy of 19th century social reformer Robert Owen and his followers and successors, who are known as Owenites. Owenism aimed for radical reform of society and is considered a forerunner of the cooperative movement.[1] The Owenite movement undertook several experiments in establishment of utopian communities organized according to communitarian and cooperative principles.[1] One of the best known of these efforts, which were largely unsuccessful, was the project at New Harmony, Indiana, which started in 1825 and was abandoned by 1829. Owenism is also closely associated with the development of the British trade union movement, and with the spread of the Mechanics' Institute movement. Economic thought[edit] Robert Owen Utopian Communities[edit] United Kingdom[edit] United States of America[edit] New Harmony, Indiana (1825–27). Canada[edit] Co-operative Movement & Labour Exchange[edit] Political & Labour Organization[edit] United Kingdom[edit] Canada[edit]

Sugar Gliders|Sugar Bears Karl Kautsky Karl Johann Kautsky (16 October 1854 – 17 October 1938) was a Czech-Austrian philosopher, journalist, and Marxist theoretician. Kautsky was recognized as among the most authoritative promulgators of Orthodox Marxism after the death of Friedrich Engels in 1895 until the outbreak of World War I in 1914. Following the war, Kautsky was an outspoken critic of the Bolshevik Revolution, engaging in polemics with Vladimir Lenin and Leon Trotsky on the nature of the Soviet state. Life and career[edit] Early years[edit] Karl Kautsky, born in Prague of an artistic and middle class Jewish family, his parents were Johann Kautsky (a scenic designer) and Minna (an actress and writer). Political career[edit] In 1883, Kautsky founded the monthly Die Neue Zeit ("The New Times") in Stuttgart, which became a weekly in 1890. Wartime years[edit] Polemics with the Bolsheviks[edit] A collection of excerpts of Kautsky's writings, Social Democracy vs. And: Death and legacy[edit] Works in English[edit] See also[edit]

Edward Spencer Beesly Edward Spencer Beesly (1831–1915) was an English positivist and historian. Life[edit] He was born on 23 January 1831 in Feckenham, Worcestershire, the eldest son of the Rev. In 1849 Beesly entered Wadham College, Oxford, another evangelical stronghold. Beesly received his BA in 1854 and proceeded MA in 1857. Foreign affairs were always a passion of Beesly's. Beesly's later publications included seventy-four biographical entries on military and political figures for the positivists' New Calendar of Great Men, and Queen Elizabeth, both of which appeared in 1892. Friends[edit] Beesly's friend Karl Marx Beesly was not only friendly with Marx, but was well acquainted with his circle. Letter from Marx[edit] Auction lot description of Beesly's copy of Das Kapital: This is an excellent association copy, inscribed to Karl Marx’s friend Professor Edward Spencer Beesly (1831–1915), positivist of the Auguste Comte school of thought, historian, and one of the founding editors of the Fortnightly Review.