5 Best Practices for Digital Marketers in 2012 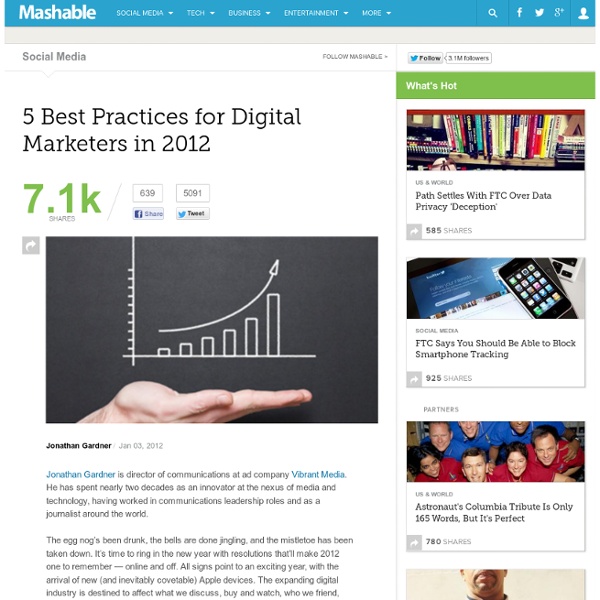 Jonathan Gardner is director of communications at ad company Vibrant Media. He has spent nearly two decades as an innovator at the nexus of media and technology, having worked in communications leadership roles and as a journalist around the world. The egg nog’s been drunk, the bells are done jingling, and the mistletoe has been taken down. It’s time to ring in the new year with resolutions that’ll make 2012 one to remember — online and off. All signs point to an exciting year, with the arrival of new (and inevitably covetable) Apple devices. The expanding digital industry is destined to affect what we discuss, buy and watch, who we friend, what we Like, and how we share — all year long. Plus, eMarketer projects a 14.4% increase in U.S. online ad spending, and Google says that video ads improve offline campaign results. 1. These days, we’re talking “word ownership” for online branding. 2. Relevance reigns in 2012. 3. 4. 5. An incredible 98% of 18- to 24-year-olds use social media. Related:  Internet Marketing

Predictions for Social Business in 2012, Part II: Knowing Your Customer - Founder of Altimeter Group, Author of Open Leadership, Coauthor of Groundswell Rather than simply make prognostications, I wanted to give actionable advice based on these trends. This is the second of my three predictions and priorities for Social Business in 2012 (read the first prediction). Prediction #2: Your customers want to be known. Your customers don’t merely want you to understand their needs or pain points. Companies sure know a lot about us, without knowing much. What I want instead is a relationship with companies that feels more like the ones I have with small business owners in my community. The problem is that this is hard to scale on two levels. For example, I can check-in on Facebook or FourSquare when I enter my local grocery store, but the store won’t know it’s me until I punch in my loyalty code in the checkout lane. Instead, what if I could automatically “check-in” to my grocery store and receive a list of tailored specials on my smartphone dedicated app. The master at this process has been Facebook. Next up: How connected are your employees?

4 Tips to Keep Your Website Ahead of the Curve This post originally appeared on the American Express OPEN Forum, where Mashable regularly contributes articles about leveraging social media and technology in small business. Sure, having a website for your business serves a practical need: to draw net-surfing users to your product or service. However, it's also much more than slapping on a run of the mill two-column template and calling it a day. Nothing kills an online buzz like a poorly designed or drastically outdated website. 2012 is heralding a new wave of innovative web technologies and design, and a page that stays in step with these trends is bound to pique interest and lower your bounce rate. 1. Mail Chimp. A bold design can be obtained with very little money, especially for those who aren't necessarily experienced in coding. For those with a little more cash to burn on a proper contractor, 99 Designs relies on crowdsourcing to gather great designers for companies looking for a reliable and cutting edge renovation. 2. 3. 4.

12 B2B Social Media Predictions for 2012 2012 is going to be a big year for adoption of social media for B2B companies. We expect that early adopter companies will move even further out in front by becoming social in many areas of their business, while more of the second wave adopters will begin to see value in social media and move forward with planning and execution. This means that there will be a greater spread of B2B social media activities than ever before. The following predictions for 2012 reveal many of the ways B2B companies will leverage social media for their business success. 1. 2. 3. 4. 5. 6. 7. 8. 9. 10. 11. 12. Let us know what you think of our predictions, and if you have any of your own.

Online Ad Spending to Surpass Print for First Time in 2012 [STUDY] For the first time in U.S. history, marketers are projected to spend more on online advertising than on advertising in print magazines and newspapers. According to a study released Thursday by eMarketer, online advertising is expected to generate $39.5 billion in sales this year — a 23.3% increase from 2011 — compared to a sum of $33.8 billion on print. That's impressive growth, especially since 2011 also witnessed a 23% jump in online ad spending, according to eMarketer's calculations. Online ad revenues should continue to grow over the next half-decade, albeit at a more modest rate, as shown in the chart below. The forecast for print is foreboding. Spending on TV promises to be largely unaffected by growing online ad budgets, although the gap between the two is set to narrow significantly. Image courtesy of iStockphoto, alikemalkarasu

40 Epic Marketing Insights From Google [Data] Ever needed a compelling, reliable stat to help make a point, round out a blog post, or make your ebook even more data-driven? Think Insights with Google, Google's new information and resource hub for marketers, has got you covered! Officially out of beta today, Google's new resource offers helpful tools, studies, trends, stats, and videos to give marketers the data they need when they need it. Use the Real-Time Insights Finder to gather information about your business' target audiences, or simply browse through the site's Facts & Stats. We've found some pretty awesome marketing stats you can use, for starters. Internet Usage 1) In the last 4 years, the web has gone from 100 million websites to 250 million. 2) 75.5% of the US population uses the internet. 3) Millennials engage in over 14 different internet activities, while those ages 65+ engage in mainly 7. 4) 67% of consumers researched online prior to purchase during the holiday season. Mobile Use 9) 31% of Americans own a smartphone.

10 Startup Trends That Will Be Huge In 2012 In his inauguration speech, President Obama paid homage to entrepreneurs. The path to greatness, he rhapsodized, has been paved by "the risk-takers, the doers, the makers of things--some celebrated but more often men and women obscure in their labor, who have carried us up the long, rugged path towards prosperity and freedom." Almost three years later, it's clear he was spot on. Consider American Express' slick ad campaign featuring Patagonia founder Yvon Chouinard; foursquare's founders as models in glossy Gap mag ads; and the cults of celebrity surrounding "the Zuck" and the late Steve Jobs. "Entrepreneurship has become sexy in a lot of ways," says Clay Newbill, executive producer of ABC's Shark Tank, which features people pitching their dreams to a panel of deep-pocketed investors, including Mark Cuban. Entrepreneurship has never been more practical, either. Here, 10 sectors to get in on while they're trending up. If you like this, then … Discovery fuels invention (and purchases)

Track Website Traffic: 40+ Great Tools The following tools will help you to better understand your website traffic, analyze and monitor all the visitors to your website. You will get access to vital information about your site’s audience. These tool will give you a clear picture of who is visiting your site or blog, how they found you, where they came from, what interests them and much more. Web Traffic Visualization ClickTracks offers intuitive, insightful analysis of your web site. Crazy Egg is a tool to supplement your analytics with stunning visuals and actionable data. Indextools provides e-business leaders accurate, insightful and timely intelligence about the effectiveness of their Web efforts, thereby helping them to increase sales, reduce marketing costs and provide a higher level of service to their customers and partners. Intellitracker is the smart way to drive your business. VisitorVille applies video game principles to help you easily visualize and better understand your web site traffic statistics.

What’s NOT Going to Happen in 2012? New York, New York - 13 Dec 2011 ​As 2011 comes to a close, ABI Research is back again for its seventh consecutive edition of “What’s NOT Going to Happen.” Instead of trying to predict what will unfold in the next 12 months, ABI Research’s analysts are traveling off the beaten path to provide their best insight on all of the progress we will not be making this coming year. 2011 proved to be a turbulent year for the global economy. Although the economic downturn is reported to be officially over, the global economy still sits on shaky and uncertain ground. With this in mind, predicting exactly what 2012 will bring seems difficult. Will anyone stop Apple from bullying operators? Will RIM pull its ailing tablet business from the market? Will 2012 be the year of the smart city? Will LTE finally take the lead in 2012? What’s the prognosis for NFC? How will the home automation market shake out?

5 Tech Trends to Watch in 2012 2012 promises to be a very busy year in all things digital, but, as with any annum, there will be just a handful of big, memorable trends. Here, I’ve collected five such movements that are likely to make a big impact in our technologically-enhanced lives. Augmented Reality It’s now in games, location apps, business cards and coffee shops and could start showing up in cars and even eyeglasses. Augmented Reality, which puts a virtual view on top of your real world, is really just a cool way of saying, “Reality with Style.” According to a report from Visiongain, 25% of all app downloads will feature some sort of augmented reality. The Micro-Payment Economy App manufacturers are not the only ones who can make money selling tiny wares and incremental upgrades. Sites like RedBubble do everything for the artist; all they need to do is upload the content. RedBubble is just one of many destinations popping up to help the aspiring entrepreneur. The Rise of the UltraBook Social/Digital Exhaustion