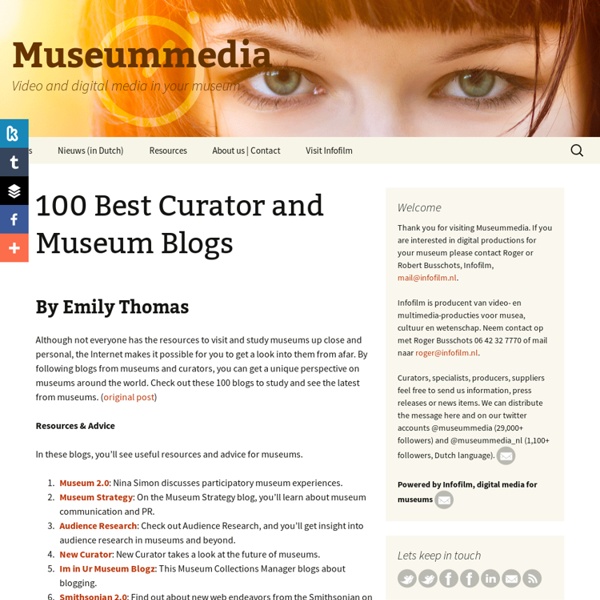 Although not everyone has the resources to visit and study museums up close and personal, the Internet makes it possible for you to get a look into them from afar. By following blogs from museums and curators, you can get a unique perspective on museums around the world. Check out these 100 blogs to study and see the latest from museums. (original post) Resources & Advice In these blogs, you’ll see useful resources and advice for museums. Curators & Staff Check out these blogs to learn about museums from their curators and other staff. Art In these blogs, you can learn about art museums. Children & Education See fun activities and more in these blogs about children’s and education museums. The Learning Team, The Manchester Museum: Find learning resources and more through the Manchester Museum blog.What’s Happening at The Children’s Museum of Memphis? History & Culture These blogs share the happenings of history and culture museums. Science Miscellaneous

The Google Cultural Institute and Arts Accessibility: Where Is It All Going? December 10, 2014; VentureBeat Google has been making strides with a variety of different arts and cultural organizations, bringing relatively inaccessible work to the public through digital means. The Google Cultural Institute archives and makes available to the online world images and documents relating to the history of film, artwork, preservation, and more. Soon, the Institute will expand to more than just an archive of history and art; it will serve as a platform for museums and galleries to create and manage their own mobile apps. The Institute will be an extension of Google Open Gallery, which has provided nonprofit cultural organizations with tools to create their own online gallery exhibits. Currently in the pilot phase, Google is working with eleven organizations from four different countries (France, Italy, Netherlands, and Nigeria) to modify and find best practices for the platform.

12 Most Mind-Blowing Content Curators to Follow There is a real art to content curation. Not only do you have to find worthy content, but you have to find a way to deliver that to your audience. This is not as easy as it sounds. Crisis of History – A new way of presenting art The opening exhibition of the Tolhuistuin with contemporary art from the Middle East will be curated by Robert Kluijver. The curatorial approach of this exhibition is being developed through a dialogue with Framer Framed and a sounding bourd of 12 people from different disciplinary backgrounds. The curatorial approach of the Crisis of History exhibition is aimed at finding new ways of presenting art in an inclusive way, offering space for dialogue and multiple perspectives. The innovative approach followed in Crisis of History in inspired by several developments: The analysis of the crisis in the art world We must find new ways in which artists can present their work and directly engage audiences, without requiring the intermediary services of the gallery (market) or curator/critic (establishment-supported institution). The fear of the empty white cube In his career Robert Kluijver has often seen (and sometimes been responsible for) amazing exhibitions without public.

Content Curation Primer Photo by Stuck in Customs What is Content Curation? Content curation is the process of sorting through the vast amounts of content on the web and presenting it in a meaningful and organized way around a specific theme. The work involves sifting, sorting, arranging, and publishing information.

Everybody’s an Art Curator This winter, the Santa Cruz Museum of Art & History will feature an exhibit of works relating to the ocean, with paintings and sculptures by established artists alongside works by local residents. According to a call for submissions, that includes not just watercolors of Pacific sunsets, but “that awesome GoPro footage you took while surfing” and “your two-year-old’s drawing of the beach that’s been on the fridge for five months.” Not an art expert? Not a problem. Museums are increasingly outsourcing the curation of their exhibits to the public—sometimes even asking the crowd to contribute art, too. The institutions produce quick and often inexpensive shows that boost ticket sales.

MOOCs Aren’t Revolutionizing College, but They’re Not a Failure A few years ago, the most enthusiastic advocates of MOOCs believed that these “massive open online courses” stood poised to overturn the century-old model of higher education. Their interactive technology promised to deliver top-tier teaching from institutions like Harvard, Stanford, and MIT, not just to a few hundred students in a lecture hall on ivy-draped campuses, but free via the Internet to thousands or even millions around the world. At long last, there appeared to be a solution to the problem of “scaling up” higher education: if it were delivered more efficiently, the relentless cost increases might finally be rolled back. Some wondered whether MOOCs would merely transform the existing system or blow it up entirely.

Featured: @thiswildidea’s Portrait of America Name: Theron Humphrey, @thiswildidea Bio: Meeting folks, loving folks, living the dream. Website: thiswildidea.com Location: USA Theron Humphrey is traveling across the United States on a quest to meet 1 new person a day, every day, for 365 days. Hans Ulrich Obrist: the art of curation Hans Ulrich Obrist One of my childhood heroes was Sergei Diaghilev. He didn't dance. Is a Museum a Database?: Institutional Conditions in Net Utopia Mike Pepi Why Do We Look for Data in the Museum? In Art Project 2023, João Enxuto and Erica Love imagine the future of the Google Art Project, the search giant’s effort to reproduce images from the world’s top museums as it develops over the next decade. The multimedia performance documents the slow erosion of the museum under the logic of corporate interests and the breathless adoption of digital innovation by none other than Google, whose stated goal is to “organize the world’s information and make it universally accessible and useful.” Google purchases the Whitney Museum’s Breuer building and repurposes it as an “immersive” and “interactive” physical interface for the Art Project, where patrons have access to high-resolution images of the original works of art. Each room is curated based on algorithms that crawl the user’s profile to predict optimal artworks.

How to Build Your Own Website Easily Using Vistaprint All About Vistaprint Building a website using Vistaprint is very easy to do. You will get excellent results as well, with a beautiful, polished-looking website that you can be proud of when you are done. Special Feature: AN ALTERNATIVE WAY OF CURATING and COLLECTING ART During my first days in London, I had the lucky chance to meet two girls who interestingly introduced me to the world of Curating from a different and unusual perspective that is now largely spreading internationally. Nur Elektra El Shami is Italian and Irina Turcan grew up in Moldova and the Czech Republic. They have known each other for more than seven years but, before fully devoting themselves to the art world, Turcan was working in investment banking, while El Shami was in the luxury sector (which in my opinion infers what kind of background it’s better to have so as to work in the Art world).

The Uncataloged Museum: What Do You See in This Picture from the Rijksmuseum? This picture has been all over my social media feed for the last week. It's a group of teenagers engrossed in their phones in front of Rembrandt's Night Watch at the Rijksmuseum in Amsterdam. And the more I read comments from my colleagues, the madder I got.

The Reader’s Advisor Online Blog The readers’s advisory librarian’s weekly update, from a scan of more than 100 blogs, newsletters, magazines, newspapers and television. This blog is brought to you by ABC-CLIO’s Reader’s Advisor Online, which is based on Libraries Unlimited’s print Genreflecting Advisory series. Give it a whirl and let us know how you like it. We’d love to hear from you. Feel free to comment on any of our posts, or contact us at rablog@librariesunlimited.com. By Cindy Orr and Sarah Statz Cords