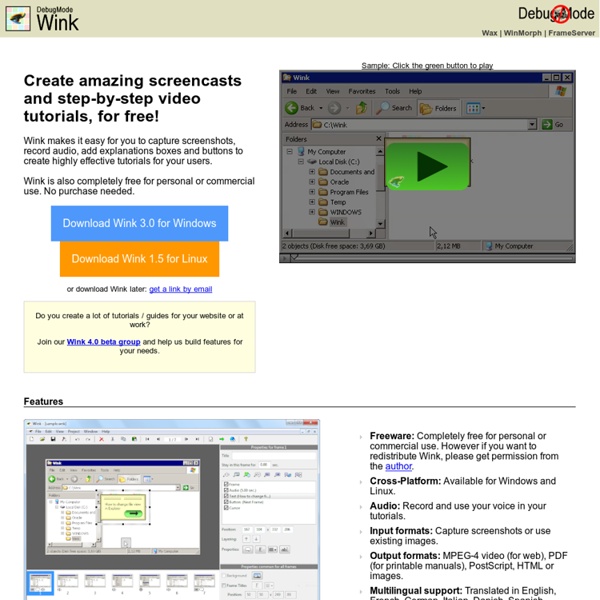 Here is a sample Flash tutorial created by Wink. Click the green arrow button to start viewing it. --------> This is a good example of how you can create tutorials in Wink, by capturing screenshots, mouse movements and specifying your own explanations with them. And all this in a standard Windows-based UI with drag-and-drop editing makes it very easy to create high quality tutorials/documentation. It is estimated that Macromedia Flash Player is installed in more than 90% of the PCs. Do you develop mobile apps or want to create tutorials about using mobile apps and websites? A new version of Wink is under development, to easily create tutorials about mobile apps and websites.If you would like to try it out when ready, please sign up here.

UltraVnc What's the difference with other screen recorders There exist a lot of screen recorders, but all lack the speed for doing some full screen recording. The speed is just to low or cpu to high. Online compression can only be done with some real-time disk eating codecs.... Free Mind From FreeMind The latest stable release of FreeMind is 1.0.0. Downloading and installation instructions are given below. Installing FreeMind FreeMind is written in Java, so it will run on almost any system with a Java runtime environment. Snagit, screen capture software Context is everything. Recording a video lets the person on the other end actually hear your voice. So the next time a webpage, PDF, or video edit is sent to you for feedback, consider dropping the red pen and record a video instead.

eduGate, LMS, Learning Management System Capture Fox Movie is a Firefox add-on and a handy tool to create tutorials about a software, a web site or anything that can be displayed on your computer. It records your screen frame by frame. You can also record your voice. Features Capture screen, record your sound and get an AVI (movie) file. Adjust video quality Easy to use. Occupy Design: Visual Tools for the 99 Percent - Design Launch Slideshow Last weekend, San Francisco, New York, and Washington, D.C. hosted spontaneous "Hackathons" to brainstorm how to use various platforms to help Occupy Wall Street. One of the ideas hatched was Occupy Design, a new website that gives a "visual language" to protesters across the country. Jake Levitas, a designer from San Francisco who's heading up the project, says it's a chance to fight back at media who characterize the movement as directionless. "These are people who have valid concerns grounded in reality and grounded in data that can be communicated visually," Levitas says. "If we get these signs on CNN instead of the ones that say 'Screw capitalism' on a piece of cardboard," viewers don't see a generic grievance but "exactly how people are being screwed and by how much.

Ezvid Thanks for visiting ezvid.com, the home of Ezvid, the coolest new screen recorder and video creator. Ezvid is exceptional because of the power of its cutting-edge effects and features. With voice recording, facecam, voice synthesis, screen drawing, and speed control, Ezvid the world's single best solution for making videos which entertain, inform, and enchant your viewers. Dia a drawing program Welcome to Dia's new homepage. Dia is a GTK+ based diagram creation program for GNU/Linux, MacOS X, Unix, and Windows, and is released under the GPL license. Dia is roughly inspired by the commercial Windows program 'Visio,' though more geared towards informal diagrams for casual use. Camtasia Studio, Screen Recorder Camtasia Studio Features Top New Features TechSmith Fuse TechSmith Fuse, our new mobile app, makes it simple to get exactly what you need from your devices into your projects.