Everything you need to know about buying a camera 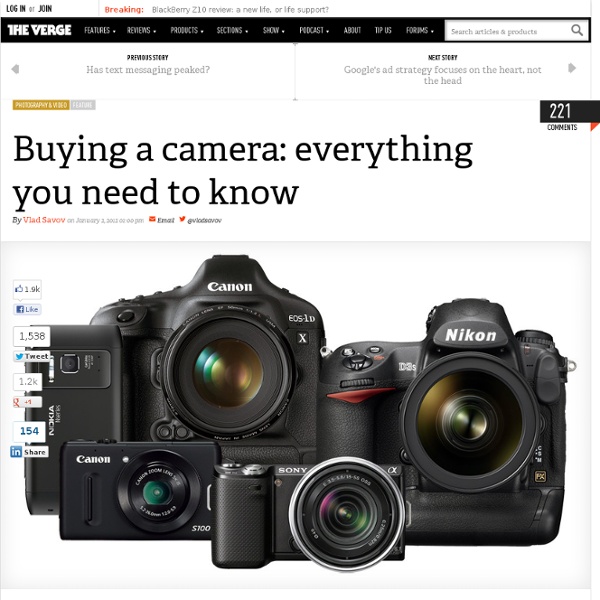 184inShare Jump To Close By David Pierce and Vlad Savov Cameras are everywhere. There’s one in your laptop, two in your phone, and probably a pair in your tablet that you’ve never used. Camera companies don’t exactly make life easy, either. Sticky TOC engaged! A guide to this guide As with our smartphone buyer’s guide, you should be careful not to treat this as a definitive dictum on what to buy. Basics of photography Basics of photography Every camera, from the tiny webcam embedded in your laptop to the full-frame pro cameras built by Nikon and Canon, operates under the same set of basic principles. The most common technique for making this recording is by channelling light through a lens onto a photosensitive material that soaks it up and turns it into an image. Ultimately, the number one lesson in photography is that there are always tradeoffs. The key settings The key settings One side effect of a wide-open lens is that it lets in a lot of unfocused light rays. Other features that matter Related:  Photo Tips

Most Creative Foam of Art Photo Manipulation June 6th, 2011 Linda There are many kind of art we have seen in this world, This incredible art of Photo manipulation just surprise us with how it is indeed possible to change the time and space. How simple can we see what is not theoretically be just cannot. You can leave a response, or trackback from your own site.

15 Tips for Low Light Landscape Photography A Post By: Natalie Denton (nee Johnson) Capturing scenes in low light remains one of the most challenging aspects of photography, yet the results when executed well can be truly captivating. Whether it’s an energetic cityscape or ethereal seascape the possibilities are endless. Here are a few essentials points to consider before you begin. It’s a good idea to formulate a plan of attack before the twilight hour so scout out a position while there is another available light and grab a few set up shots to make sure your scene works and will be free from distracting objects. Image by V31S70 So start by setting your camera upon a solid tripod and switching the unit to manual or shutter priority if you are wish. Image by kern.justin Another key piece of kit is a remote control shutter release like Nikon’s ML-L3 wireless control which works with Nikon’s enthusiast range of cameras; D40, D40x, D60, D80 and D90. Image by Paco CT Read more from our category Most Popular 12657 Shares

10 Photography Quotes that You Should Know Focusing Basics | Aperture and Depth of Field Depth of Field Depth of Field (DOF) is the front-to-back zone of a photograph in which the image is razor sharp. As soon as an object (person, thing) falls out of this range, it begins to lose focus at an accelerating degree the farther out of the zone it falls; e.g. closer to the lens or deeper into the background. With any DOF zone, there is a Point of Optimum focus in which the object is most sharp. Aperture The aperture is the opening at the rear of the lens that determines how much light travels through the lens and falls on the image sensor. Small vs Large Aperture Manipulating the aperture is the easiest and most often utilized means to adjust Depth of Field. Aperture Range The aperture range identifies the widest to smallest range of lens openings, i.e. f/1.4 (on a super-fast lens) to f/32, with incremental “stops” in between (f/2, f/2.8, f/4, f/5.6, f/8, f/11, f/16, and f/22). Distance from the Lens Conclusion You might also like:

Stuck In Customs | HDR Photography, Travel Photography and Camera Reviews 99 Excellent Examples of Forced Perspective Photography | Photography Forced perspective is a technique that employs optical illusion to make an object appear farther away, closer, larger or smaller than it actually is. It is used primarily in photography, filmmaking and architecture. It manipulates human visual perception through the use of scaled objects and the correlation between them and the vantage point of the spectator or camera. There are many ways to attack photography and some are much more expensive than others. When it comes to inspiration then there is no limitation on resources. You may be interested in the following related articles as well. Feel free to join us and you are always welcome to share your thoughts that our readers may find helpful. Don’t forget to and follow us on Twitter — for recent updates. Brilliant Examples of Forced Perspective Photography Photography can serve as a nice source of inspiration. Further Resources! Find Something Missing?

Low Light Photography Tips – Infographic | SnapBlog - Snapsort and LensHero share We’ve just finished our four part series on low light photography. Low light photography is something that we all must deal with as photographers. Whether you’re taking photos with a point and shoot during an evening out, shooting a wedding party or capturing a landscape at dusk it’s important to understand the basics of shooting with low light. The first three parts in our series are: Our fourth part is our low light infographic which we’re providing as a quick reference. Feel free to insert the full infographic on your blog for your readers benefit, just credit us back as the source using the code below. Embed the Mini Infographic (600 x 550)

dZoom, Pasión por la Fotografia Photography Tips Five Easy Steps to Simple Camera Mastery Creativity is all about making choices. But when you set your camera to automatic, as so many do, the camera makes the choices for you. If you want to be creative, the first thing you have to do is turn off the automatic setting. It may seem intimidating. But photographers Rachel Devine and Peta Mazey use seminars, a Web site and personal instruction to wean people from “auto,” giving them an ability that Ms. Devine said “elevates the holiday snapshot to artwork that you’ll want to look at again and again.” The pair have written a new book, “Beyond Snapshots” to further impart those lessons. Peta Mazey Push the ISO In the analog days when Kodachrome was king, a selection of films provided different light sensitivity. Open up to aperture The term aperture refers to the size of the adjustable iris in the lens. Think shutter The shutter controls how long your digital sensor is exposed to light. Mix and match ISO, aperture and shutter speed work together to achieve a range of effects.

6 Tips for Better Portraits Why do people look so blank, so vacant, so unnatural in portraits? Peter Hurley, a leading head-shot artist for actors, celebrities and executives, said people look like badly embalmed cadavers because they try to pose, but lack the skill to look natural doing it. Even professional models, experts at a certain haughty look, seldom know how to look natural. “I have to deprogram them into something that is more real,” said Mr. Hurley. How does Mr. Keep your chin up. The trick is to get the subject comfortable with the unnatural posture. People tend to tuck their chins in photos, said Peter Hurley. Show your good side. Get your Eastwood on. “If someone wants to look confident, have them squint,” said Mr. Have a laugh. To get a range of expressions he will give non-sequitur directions. Frame it up. In the end, it comes down to learning how to make people comfortable positioned in a way that feels uncomfortable.