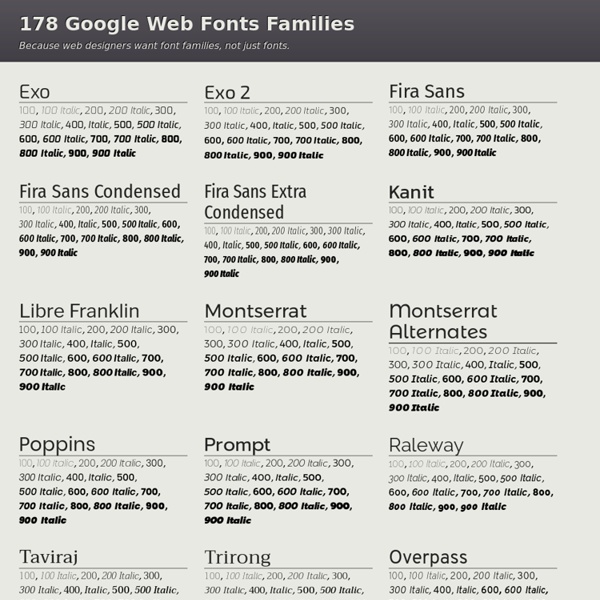 Compass WhatFont Tool ← Back to Chengyin's main page What is the easiest way to find out the fonts used in a webpage? Firebug or Webkit Inspector? No, that's too complicated. It should be just a click away. Hence I wrote WhatFont, with which you can easily get font information about the text you are hovering on. To embrace the new web font era, WhatFont also detects services used for serving the font. Font name? Want to know more? Want the font? Want to share your discovery? ← Drag this to your bookmark bar to install On any webpage, click your WhatFont bookmark to use the tool. Full support: Firefox 3.6+, Chrome 9+, Safari 4+, Internet Explorer 9. Limited support: Internet Explorer 8. ↑Install the extension from Chrome Web Store. On any webpage, click WhatFont button to use the tool. Download Now After downloading, open the extension file to install. The quick brown fox jumps over the lazy dog. Email chengyin.liu@gmail.com Twitter @chengyinliu The tool should auto-update itself. Hosted on Github

Initializr - HTML5 Boilerplates How do I "think in AngularJS" if I have a jQuery background? Initializr: With Great Templates Comes Great Responsivity! | @verekia's blog Today I'm proud to announce that a "Responsive template" is now available on Initializr! It will help you dealing with all the various devices used to display your site. Mobiles, tablets, netbooks, laptops, desktop monitors, HUGE desktop monitors... Making your site work correctly on all these devices is a real nightmare. About responsive web design For those who have been living in a cave for the last few months (understand: for those who have a life and don’t spend days reading tweets and blogs) you probably need a short update about what a "responsive" design is. To design a responsive layout, we have to forget about the usual static 960px width layouts and go fluid with percentage widths and media queries. A fluid layout with percentage widths The first thing our page needs is a "fluid" layout. Mobile-first approach media queries Media queries are a cool way to specify different styles depending on the device used (by aiming particular screen resolutions or orientations for example).

Less: CSS Pre-Processor Yeoman Sass: CSS Pre-Processsor Before you can use Sass, you need to set it up on your project. If you want to just browse here, go ahead, but we recommend you go install Sass first. Go here if you want to learn how to get everything setup. Fuentes Sassaparilla: Sass & Compass Grid System