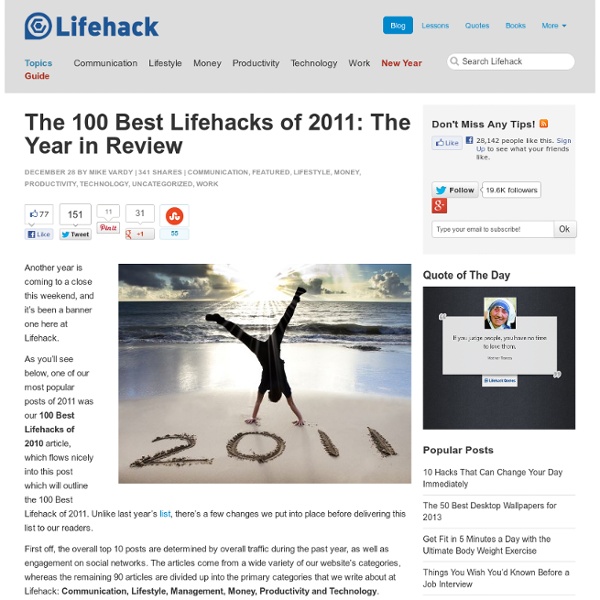 Another year is coming to a close this weekend, and it’s been a banner one here at Lifehack. As you’ll see below, one of our most popular posts of 2011 was our 100 Best Lifehacks of 2010 article, which flows nicely into this post which will outline the 100 Best Lifehack of 2011. Unlike last year’s list, there’s a few changes we put into place before delivering this list to our readers. First off, the overall top 10 posts are determined by overall traffic during the past year, as well as engagement on social networks. The articles come from a wide variety of our website’s categories, whereas the remaining 90 articles are divided up into the primary categories that we write about at Lifehack: Communication, Lifestyle, Management, Money, Productivity and Technology. Those 90 posts were decided on based on visits to each article, social media interaction, comments and then were finally curated by the Lifehack editorial team. You’ve got a lot of reading to do here, os let’s get started… Money Related:  Stepcase Lifehack

Scientific Speed Reading: How to Read 300% Faster in 20 Minutes (Photo: Dustin Diaz) How much more could you get done if you completed all of your required reading in 1/3 or 1/5 the time? Increasing reading speed is a process of controlling fine motor movement—period. This post is a condensed overview of principles I taught to undergraduates at Princeton University in 1998 at a seminar called the “PX Project”. The below was written several years ago, so it’s worded like Ivy-Leaguer pompous-ass prose, but the results are substantial. In fact, while on an airplane in China two weeks ago, I helped Glenn McElhose increase his reading speed 34% in less than 5 minutes. I have never seen the method fail. The PX Project The PX Project, a single 3-hour cognitive experiment, produced an average increase in reading speed of 386%. It was tested with speakers of five languages, and even dyslexics were conditioned to read technical material at more than 3,000 words-per-minute (wpm), or 10 pages per minute. The Protocol First – Determining Baseline 2) Speed (3 minutes):

The 100 Best Lifehacks of 2010: The Year in Review Happy New Year everyone! It’s the first week of 2011 and many of us are getting ready to kick off the brand new year with a big bang. As we start off 2011 with our new resolutions and goals, let us now look back at the best posts at Lifehack in the past year. In this review post, I have gathered 100 of the best LifeHack articles in 2010. Do not attempt to read this whole post at once! Let me start off with the top 10 most popular life hack posts out of the 100s of posts published in 2010. Following which, I’ll present the 100 top articles presented in the 11 catetgories. Top 10 Most Popular Posts in 2010: Overall Personal Growth Maximizing Productivity and GTD Lifestyle and Habits Inspiration & Motivation Goal Achievement & Success Emotional Mastery People Skills & Relationships Communications & Writing Business & Career Creativity & Inspiration Family Miscellaneous Image ©

50+ Personal Productivity Blogs You've Never Heard of Before (and about a dozen you probably have) The personal productivity niche on the Web has grown by leaps and bounds since Lifehack launched only a few years ago. While a few sites dominate the rankings, there are lots and lots of lesser-known sites that are as good or even better than the “A-list” productivity blogs. Most of them are solo operations — the GTD newbie documenting his or her quest for greater control over their life, the coach or consultant sharing his or her knowledge with the world, the writer adding to his or her published work with notes, errata, and new findings. Their voice is personal, intimate even — and deserves to be heard. So here I present a collection of productivity blogs that are less well-known, by writers I think you should get to know better. Of course, the big names are here too — after all, I owe some of them a tremendous debt for helping me get a grip on my own life. Enjoy! 43 Folders: Merlin Mann started a lot of us on this journey, so now he has to pay. Read full content

Jason Silva - Filmmaker - Futurist - Epiphany Addict Learn To Speed Read In Just A Few Hours I’m not one for making big New Year’s Resolutions as I am a continual goal setter and look at life plans and goals on a weekly or at least monthly basis, so I don’t need one day a year to pretend I’m actually going to change the year, I just always do that. However, there is one that I can’t encourage others enough to look more seriously at and that is about reading. I hope I can inspire a few people to put this on their own goal sheets for the year. Thank you everyone for a wonderful 2008, may your 2009 be even better! Background One of the most important things in my life was discovering speed reading. Well, that little bit of research paid off dearly for me as it’s made a HUGE impact in my life and is now one of my favorite past times, to sit down, read and learn from a great book. What is Speed Reading The brain can depict any visual image in a fraction of a second into many, many colors, objects, sites and moods in that since glance. Speed Reading Myths Broken 1. 2. 3. 4. 5. 6. 7.

7 Not So Obvious Habits To Maximize Your Productivity - StumbleUpon I was a big fan of productivity, and, in some respects, I still am. I’ve been a very early adopter of GTD, and, for years, I did my weekly reviews with the discipline of a zen monk. But, eventually, I hit a roadblock. GTD is about getting things “done”, but in life we have much more to experience than “doing”. So, I confess I fell out from the GTD wagon. But enough with all this shameless self-promotion intro. So, instead of doing a presentation of the Assess – Decide – Do framework, I chose to isolate only 7 simple tips for today’s post. As a matter of fact, they’re even organized as such. 1. I firmly believe that the art of ignorance should be taught in schools. Especially on Mondays, when all the previous week unprocessed stuff seems to crash on us, try to apply this. Slash out Twitter, Facebook, email. 2. Each tiny task that you finish is an achievement. Tuesdays are great for this habit, because they’re the first link after the week hast started. 3. 4. 5. 6. 7.

Quotes, Quotes, Quotes Yep, I’ve been spending time surfing around the web and Pinterest again. Enjoy!!! click the quote to go to the source. Just a little reminder to take chances Love this!!! Love the photo with this quote. 30 Things to Stop Doing to Yourself When you stop chasing the wrong things you give the right things a chance to catch you. As Maria Robinson once said, “Nobody can go back and start a new beginning, but anyone can start today and make a new ending.” Nothing could be closer to the truth. Here are some ideas to get you started: Stop spending time with the wrong people. – Life is too short to spend time with people who suck the happiness out of you. Update: Read our follow-up to this post: 30 Things to Start Doing for Yourself Photo by: Rob Brucker

How To Tighten Your Grip On Your Memory Pneumonic devices. Singing. The old write-on-the-back-of-your-hand trick. If you suffer from forgetfulness, there may be a solution that doesn't require performing mental back flips to improve your memory muscles. It might be as easy as flexing your fist muscles, according to a new study published by the journal PLOSone. In a study led by Ruth Propper, a professor of psychology at Montclair State University, researchers determined that clenching your fists as you process and recall information can help you to remember it better. Researchers tested the short-term memory of 51 participants by giving them a list of words, then asking them to memorize and write down as many words as possible from the list. In a statement, Propper explained that muscle activity on the right and left side of the body helps to stimulate different hemispheres of the brain--triggering neuronal activity in brain sections relating to memory encoding and recall.

The 90 Best Lifehacks of 2009: The Year in Review Another year is winding down, and that means it’s time to take a look back at what we’ve done here at Lifehack over the last 12 months. 2009 was a scary year for a lot of people – corporate layoffs, a shaky global economy, stunningly vicious politics, old wars grinding on and new ones flaring up. In the midst of all this, though, many saw opportunities; with the myth of life-long corporate employment shattered as some of the world’s biggest companies teetered on the brink of collapse, entrepreneurship enjoyed a major resurgence. This rise in self-reliance extends beyond our work life, too – people are embracing a do-it-yourself, person-to-person lifestyle where status and the display of wealth matter much less than authenticity and social interaction. All of this is reflected in the posts that went up on this site over the last year. What emerges from all this is a treasure trove of good advice, ranging from the lofty and idealistic to the immediately practical. Software and Technology

10 Insanely Awesome Inspirational Manifestos There are certain messages that serve to get you “back to one” when you find you’re going off course. Whether you use tools such as a manifesto, a personal mission statement, a vision board or a list similar to Benjamin Franklin’s “13 Virtues”, taking the time to identify with one and then keeping it handy is worthwhile – and perhaps even imperative. But in a lot of cases you don’t have to “reinvent the wheel”; there are some awesome inspirational manifestos that have already put out there for you to look at and use as a means to set you back on course. Some come in the form of an image, some as a video, and some as nothing more than a blog post. 1. This is one of the best known ones on the web. 2. Baz Luhrman, best known as the director of films like “Strictly Ballroom” and “Moulin Rouge!” 3. the lululemon manifesto The corporate manifesto for thsi athletic wear company may very well be a bellwether for a shift in the culture of the new enterprising set. 4. 5. 6. 8. 9. focus 10.

Welcome to Osho World That is the technique: After breath comes in -- that is, down -- and just before turning out -- that is, going up -- THE BENEFICENCE. Be aware between these two points, and the happening. Before the breath is turning in or turning out, there is a moment when you are not breathing. For tantra, each outgoing breath is a death and each new breath is a rebirth. You are not to train the breath. Try it. When the breath touches your nostrils, feel it there. Breath and consciousness should become one. Buddha tried particularly to use this method, so this method has become a Buddhist method. All the religions of the world, all the seers of the world, have reached through some technique or other, and all those techniques will be in these one hundred and twelve techniques. Buddha said, "Be aware of your breath as it is coming in, going out -- coming in, going out." The reason is that Buddha was talking with very ordinary men, and even that might create a desire to attain the interval.