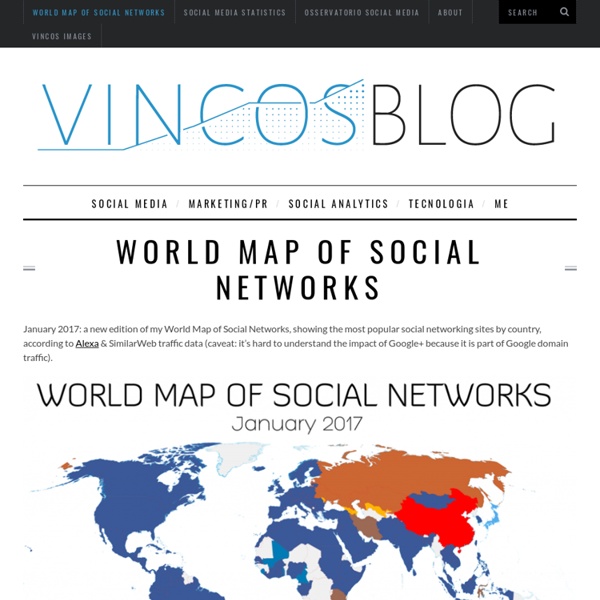 January 2017: a new edition of my World Map of Social Networks, showing the most popular social networking sites by country, according to Alexa & SimilarWeb traffic data (caveat: it’s hard to understand the impact of Google+ because it is part of Google domain traffic). There are a lot of news since last January: Facebook is still the leading social network in 119 out of 149 countries analyzed, but it was stopped in 9 territories by Odnoklassniki, Vkontakte and Linkedin. It’s interesting to see that in some countries, like Botwana, Mozambique, Namibia, Iran e Indonesia, Instagram wins and that some African territories prefer LinkedIn. Overall LinkedIn conquers 9 countries, Instagram 7, meanwhile VKontakte and Odnoklassniki (part of the same group Mail.ru) grow up in Russian territories. In China QZone still dominates the Asian landscape with 632 million users and Japan is the only country where Twitter is the leader. But what’s going on behind the first place? inShare1,047 inShare1,047

Interactive Geography Games Interactive games and maps can be good tools for students to use in developing their knowledge of geography. The following ten websites are good places to find a variety of interactive geography games and interactive maps that will help students develop their knowledge of geography. The last item in the list is a resource for creating your own geography game. DeadSoci.al: Send Facebook Messages Long After You Die The somewhat well-worn cliché ‘there’s an app for that’ is typically voiced with a derisory tone these days, and for good reason. There really is an app for everything, and the afterlife is no different. Last year we reported on a new Facebook app that allows you to record a message that will be shared with your friends and family only when you die. If I Die lets you leave a video message and select three trustees that will be appointed to hold your message. It takes all three of those trustees to say that you are actually dead before the message is released to all friends and family. Then there’s the likes of 1000Memories, which is a ‘permanent’ online repository for photos, stories and other content, which has a mission to provide “a safe place for your memories so that they can be passed down to future generations.”

A Walk Through the Ancient World When the first immersive 3D games came out, I asked a programmer if he knew of anyone who had used that technology to create a Virtual Ancient Rome or Virtual Ancient Athens. I loved the idea of walking around in a place whose current face was changed out of all recognition from its golden age. He shook his head. Creating virtual worlds was way too time consuming and required too much specialist knowledge and so was too expensive. A virtual Rome wouldn't create the profit that Doom did. 40 Most Popular Social Networking Sites of the World "Social networking" has been around forever. It's the simple act of expanding the number of people you know by meeting your friends' friends, their friends' friends and so on. In fact, many of us today use Twitter and Facebook to promote our existing and upcoming businesses. And people looking to connect with other business-associated contacts usually move to sites like LinkedIn, but one need to understand that social media is beyond Twitter, Facebook, LinkedIn and Blogs. After observing and running an analysis on hundreds of Social Networking sites I have listed down 40 most popular social networks across countries.

Digital in 2017: Global Overview - We Are Social Singapore Today marks a momentous milestone for all things digital, with the new Digital in 2017 Global Overview report from We Are Social and Hootsuite revealing that more than half of the world’s population now uses the internet. Our findings have exciting implications for businesses, governments, and society in general, but they’re also testament to the speed with which digital connectivity is changing the lives of people all over the world. It’s only been 25 years since Tim Berners-Lee made the ‘World Wide Web’ available to the public, but in that time, the internet has already become an integral part of everyday life for most of the world’s population. It’s not just the internet that’s growing rapidly, either; we’ve identified a wealth of other important milestones as part of this year’s Global Digital report, including: You’ll find all sorts of valuable information in the suite of Global Digital reports we'll be publishing in partnership with Hootsuite over the next few days, including:

Mappiness iPhone App Maps Happiness (Say That Three Times Fast) Officially launching today is Mappiness, a UK iPhone app that “maps Happiness” by pinging users with a survey in order to plot out their feelings during the day (happiness, in this case, is apparently user-defined). Using LBS, the app links responses and response locations to environmental data in an attempt to, according to lead researcher George MacKerron, “better find answers on the impacts of natural beauty and environmental problems on individual and national well being.” MacKerron, based at the London School Economics, elaborated on the idea of tracking happiness, “In the 19th century economists imagined a ‘hedonometer,’ a perfect happiness gauge, and psychologists have more recently run small scale ‘experience sampling’ studies to see how mood varies with activity, time of day and so on.” Mappiness is the first project of its kind to add location to the mix. Now, thanks to the iPhone, we might get a better grasp on humanity’s happiness habits.

Designing an OSM Map Style With the recent change to our map system, we introduced a new map style for our OSM tiles. Since 2008, we’ve used the default OSM styles, which produces map tiles like this: This style is extremely good at putting a lot of information in front of you.