How to Fight Information Overload 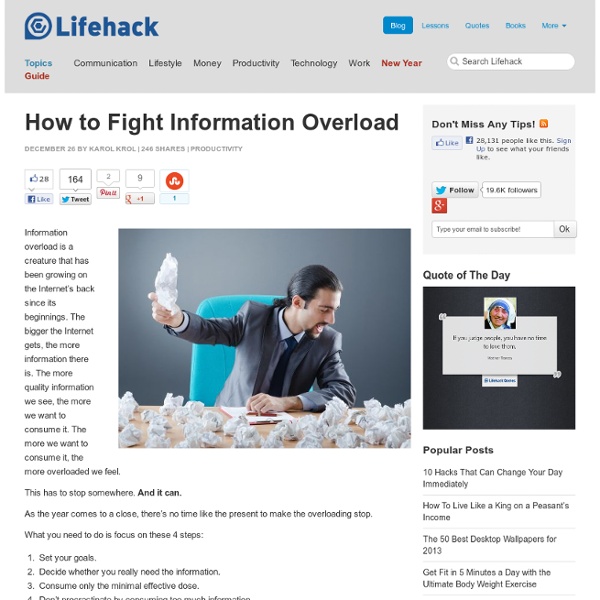 Information overload is a creature that has been growing on the Internet’s back since its beginnings. The bigger the Internet gets, the more information there is. The more quality information we see, the more we want to consume it. The more we want to consume it, the more overloaded we feel. This has to stop somewhere. As the year comes to a close, there’s no time like the present to make the overloading stop. What you need to do is focus on these 4 steps: Set your goals.Decide whether you really need the information.Consume only the minimal effective dose.Don’t procrastinate by consuming too much information. But before I explain exactly what I mean, let’s discuss information overload in general. The Nature of the Problem The sole fact that there’s more and more information published online every single day is not the actual problem. When we see some half-baked blog post we don’t even consider reading it, we just skip to the next thing. That’s when we feel overloaded. 1. 2. 3. 4. In Closing Related:  picked pearltrees • Psychtherapy

How Developers Stop Learning: Rise of the Expert Beginner Beyond the Dead Sea: When Good Software Groups Go Bad I recently posted what turned out to be a pretty popular post called “How to Keep Your Best Programmers,” in which I described what most skilled programmers tend to want in a job and why they leave if they don’t get it. Today, I’d like to make a post that works toward a focus on the software group at an organization rather than on the individual journeys of developers as they move within or among organizations. This post became long enough as I was writing it that I felt I had to break it in at least two pieces. This is part one. In the previous post I mentioned, I linked to Bruce Webster’s “Dead Sea Effect” post, which describes a trend whereby the most talented developers tend to be the most marketable and thus the ones most likely to leave for greener pastures when things go a little sour. Learning to Bowl Before I get to any of that, I’d like to treat you to the history of my bowling game. I am a fairly athletic person.

64 Things Every Geek Should Know « Caintech.co.uk If you consider yourself a geek, or aspire to the honor of geekhood, here’s an essential checklist of must-have geek skills. The term ‘geek’, once used to label a circus freak, has morphed in meaning over the years. What was once an unusual profession transferred into a word indicating social awkwardness. As time has gone on, the word has yet again morphed to indicate a new type of individual: someone who is obsessive over one (or more) particular subjects, whether it be science, photography, electronics, computers, media, or any other field. A geek is one who isn’t satisfied knowing only the surface facts, but instead has a visceral desire to learn everything possible about a particular subject. A techie geek is usually one who knows a little about everything, and is thus the person family and friends turn to whenever they have a question. 2. If you rolled your eyes here, that is a good thing. 1. 3. 4. 5. 6. 7. 8. 9.

The Complete Guide to Not Giving a Fuck Ok, I have a confession to make. I have spent almost my whole life– 31 years– Â caring far too much aboutÂ offending people, worrying if I’m cool enough for them, or asking myself if they are judging me. I can’t take it anymore. Today, ladies and gentlemen, is different. We’re going to talk about the cure. Do you wonder if someone is talking shit about you? Well, it’s time you started not giving a fuck. FACT NUMBER 1. Yes, it’s really happening right at this moment. What people truly respect is when you draw the line and say “you will go no further.” Right. Regular people are fine– you don’t actually hear it when they’re talking behind your back. Thankfully, that’s not actually true. FACT NUMBER 2. This stuff is crazy, I know, but it’s cool, you’ll get used to it. How liberating this is may not even hit you yet, but it will. You know when they say “the best revenge is a life well lived”? So not giving a fuck is actually a necessary precedent to create a good life for yourself. STEP 1.

How to Learn More and Study Less Photo by fatal Cleopatra Editor’s note: This is a guest post written by Scott Young. Every Monday is Productivity & Organization Day at Zen Habits.The title of this post sounds impossible right? Place first in a three province wide chemistry test. I say all this not to boast about how great I am, because I feel my accomplishments are rather modest compared to many people I know. More studying time won’t help if the way you are studying is flawed to begin with. Holistic Learning Smart people don’t just learn better. Holistic learning is basically the opposite of rote memorization. Excessive studying shows you aren’t learning holistically. How to Boost Your Study Habits Holistic learning isn’t like a brainstorming technique or mind-mapping. But there are some tools that can help you shift your learning habits so they become more holistic: Visceralize – You’ve probably heard of visualizing, right? Scott Young is a blogger on learning, productivity and habits. See also:

intrepid spirit SmartDraw - Communicate Visually How to Build Self-Discipline Discipline is freedom. You may disagree with this statement, and if you do you are certainly not alone. For many people discipline is a dirty word that is equated with the absence of freedom. In fact the opposite is true. As Stephen R. Self-discipline involves acting according to what you think instead of how you feel in the moment. Work on an idea or project after the initial rush of enthusiasm has faded awayGo to the gym when all you want to do is lie on the couch and watch TVWake early to work on yourselfSay “no” when tempted to break your dietOnly check your email a few of times per day at particular times In the past self-discipline has been a weakness of mine, and as a result today I find myself lacking the ability to do a number of things which I would like – e.g. to play the guitar. If you struggle with self-discipline, the good news is that it can be developed. 1. Discipline means behaving according to what you have decided is best, regardless of how you feel in the moment. 2.