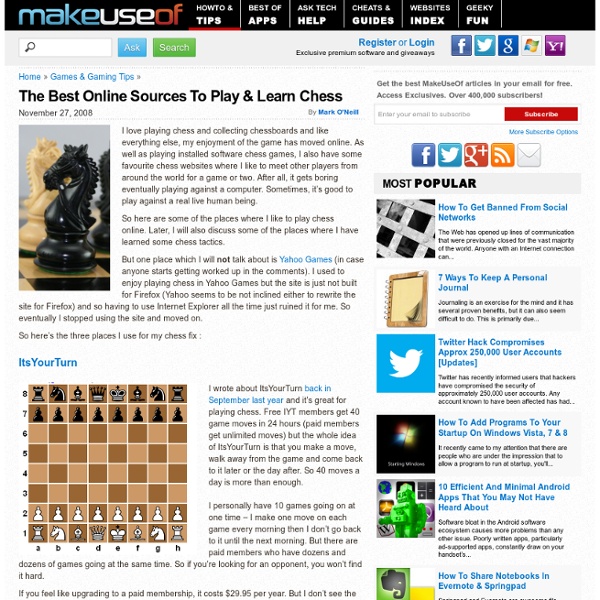 I love playing chess and collecting chessboards and like everything else, my enjoyment of the game has moved online. As well as playing installed software chess games, I also have some favourite chess websites where I like to meet other players from around the world for a game or two. After all, it gets boring eventually playing against a computer. Sometimes, it’s good to play against a real live human being. So here are some of the places where I like to play chess online. Later, I will also discuss some of the places where I have learned some chess tactics. But one place which I will not talk about is Yahoo Games (in case anyone starts getting worked up in the comments). So here’s the three places I use for my chess fix : ItsYourTurn I wrote about ItsYourTurn back in September last year and it’s great for playing chess. I personally have 10 games going on at one time – I make one move on each game every morning then I don’t go back to it until the next morning. Flash Chess III Email Chess

Best Chess Software for Casual Players Available languages: Schach - Deutsch Шахматы - Русский Шахи - Українська Chess - English Ajedrez - Español Échecs - Français Scacchi - Italiano Sakk - Magyar Schaken - Nederlands Szachy - Polski Help us finish translating: My language is not listed We are working hard to make Chess.com available in over 70 languages. The Best Chess Software Chessmaster: Grandmaster Edition Chessmaster is a computer game owned by UbiSoft and is available on the PC, Xbox, and DS.It has sold more than 5 million units as of 2002. It is certainly one of the oldest programs dating back to 1986. If you are a young adult or older who is a inexperienced,completely new, or an intermediate player this software is suitable for you. The first section of Chessmaster is known as Learning Chess. It contains tutorials from both Grandmaster Larry Christansen on his section "Attacking Chess" and International Chess Master Josh Waitzkin about his book the Art of Learning, both which are very useful to beginning and intermediate players. The second section of Chessmaster is the single player. The last section is the the multiplayer section.

Why Play Chess? Chess is an exercise of infinite possibilities for the mind, one which develops mental abilities used throughout life: concentration, critical thinking, abstract reasoning, problem solving, pattern recognition, strategic planning, creativity, analysis, synthesis, and evaluation, to name a few. Chess can be used very effectively as a tool to teach problem solving and abstract reasoning. Learning how to solve a problem is more important than learning the solution to any particular problem. Chess has been played and enjoyed by people around the world for two thousand years. Many notable people in history made chess their favorite pastime. Many parallels have been drawn between mathematics, music, and chess. Mathematical thinking is generally held to be more or less closely related to the type of thinking done in chess. An intriguing phenomenon that links mathematics, music and chess is the fact that child prodigies have been known only in these three fields.

Best Free Computer Chess The art of chess has fascinated down the ages, through Alice and beyond. PCs provide countless opportunities for learning, playing, practicing, studying, and even watching both online and offline. Convenient freeware chess programs are available that give you all you need to do these things straight out of a single box at any level. Great for beginners and experts alike. If you or your children are just learning chess... So where to start? This review page of free chess software and computer-related resources on the internet will aim to address the varying needs of players, ranging from the casual to the keen. The standalone software section of the review will cover some of the top freeware chess programs for computer play on Windows and Linux, as well as briefly discussing free chess software for Mac users (including iPad/iPhone), Android app recommendations, a top pick free standalone internet client, freeware for learning, and freeware for match database study. Also recommended:

The Chess-board — Illustration by John Tenniel to chapter 2, "Through the Looking Glass," The Chess-board — Illustration to the second chapter of Through the Looking Glass by John Tenniel. Wood-engraving by the Dalziels. "I declare it's marked like a large chess-board!" Alice said at last. In 2000 student assistants from the University Scholars Program, National University of Singapore, scanned this image and added text under the supervision of George P. Computer chess 1990s pressure-sensory chess computer with LCD screen Computer chess is computer architecture encompassing hardware and software capable of playing chess autonomously without human guidance. Computer chess acts as solo entertainment (allowing players to practice and to better themselves when no sufficiently strong human opponents are available), as aids to chess analysis, for computer chess competitions, and as research to provide insights into human cognition. Current chess engines are able to defeat even the strongest human players under normal conditions. Whether computation could ever solve chess remains an open question. Availability[edit] Computer Chess IC bearing the name of developer Franz Morsch (see also Deep Fritz) Computers versus humans[edit] In May 1997, an updated version of Deep Blue defeated Kasparov 3½–2½ in a return match. In October 2002, Vladimir Kramnik and Deep Fritz competed in the eight-game Brains in Bahrain match, which ended in a draw. Implementation issues[edit]

Best chess games for PC? Available languages: Schach - Deutsch Шахматы - Русский Шахи - Українська Chess - English Ajedrez - Español Échecs - Français Scacchi - Italiano Sakk - Magyar Schaken - Nederlands Szachy - Polski Help us finish translating: My language is not listed We are working hard to make Chess.com available in over 70 languages. 3 MAN CHESS variant in the round 12 Bad-Ass Chess Sets The game of chess takes cunning and intelligence and can sometimes be incredibly intense. But your standard Chess Set just doesn’t reflect the same intensity. If you prefer to play on a board that’s as mighty as your chess maneuvers then check out these 12 Bad Ass Chess Sets. Pirates vs Ninjas Everyone knows that Pirates are better than Ninjas. Rolling Stone Chess Set When we say this chess set is an authentic Rolling Stone Chess Set, we don’t mean official, we mean it’s ACTUALLY made of Rolling Stone magazine covers. Auto Part Chess Set We could think of no material grittier or more masculine to use for a chess set than used auto parts and scrap metal. Rustic Warriors Auto Part Chess Set If you liked the Auto Parts Chess set, you’ll be blown away by the updated Rustic Warriors Set. Platonic Chess Chess Set for Tesla Inspired by our favorite mad scientist Nikola Tesla, this chess set features spooky Tesla coil-esque pieces encased in glass. 3D Chessboard Grahame Fowler Chess Set