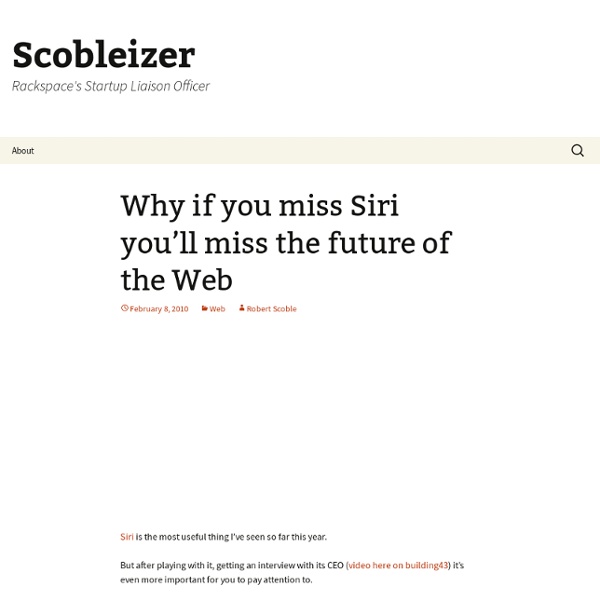 Siri is the most useful thing I’ve seen so far this year. But after playing with it, getting an interview with its CEO (video here on building43) it’s even more important for you to pay attention to. It is the best example of what the web will be. Let’s go back. Web 1994 was the “get me a domain and a page” era. Web 2000 was the “make my page(s) interactive and put people on it” era. Siri is the best example. Why is it so different? Because on the back end they’ve stitched together a sizeable group of APIs from services like Opentable to Flightstats. Before it was common only for a couple of APIs to be joined together, here they have dozens. That’s the other thing. Why is this really new and important? No, the real secret sauce and huge impact on the future of the web is in the back end of this thing. I just asked Siri “who checked into the Half Moon Bay Ritz?” But the team now could hook up Foursquare’s APIs and make this question answerable. This is the future of the web.

Siri And The iPhone’s Physical Keyboard The backlash was inevitable. Siri has had a bit of an image problem this past week. Just like all technology propelled by the tailwinds of hype, it hit the inevitable wall of tech punditry. First of all, the downtime issue is a total red herring. That’s why stories demanding an explanation for Siri’s downtime are comical. The more interesting angle of the backlash goes after what Siri is and what Siri is not. Yet. Again, see: beta. The key is when Jordan also complains that she can often type faster than Siri can think. Now all of those people seem to happily be using iPhones (or Android phones) without physical keyboards without problems. What Siri represents is an extension of computing by utilizing something that (most) everyone has: voice. Everyone is amazed now when they see children interact with the iPad in such a natural way. But we’re not there yet. But maybe it’s hard to blame them. Does that mean speech replaces text input entirely? [image: CBS]

30 Useful iPad Apps for Business & Presentation Apple sold more than 1 million copies of iPads in the first 3 months. This gadget is definitely more than just a larger version of iPhone or iPod touch. With 4x the screen of an iPhone, the iPad’s display is ideal for reading and for presentations. In today’s post, we’d like to highlight some really useful iPad applications that might replace the things you do daily with your laptop or netbook. Full list after jump. Presentations KeynoteKeynote is the most powerful presentation app ever designed for a mobile device. CorkulousCorkulous is incredible idea board for iPad to collect, organize, and share your ideas that feel completely natural. Power Presenter This application is used for Presentation. Sadun’s WhiteboardTransform your iPad into a presentation screen with Whiteboard. Graph, Charts, Diagram & Statistic Analytics HDThe premier app for Google Analytics, Analytics App, now debuts on the iPad as Analytics HD! Idea BoardsA simple easy way to put your ideas somewhere. Planning Meetings

Leaked Video: Swyping Versus iPhone Typing. (Swype For Android I A year ago, Swype launched a new way to type on a touchscreen phone at TechCrunch50. Swype was created by the inventor of the T9 predictive typing system used on most phones today because he felt that new text input methods for small touchscreens are sorely needed. Today, the startup announced the first phone to use the technology will be the Samsung Omnia II on Verizon. As you can see in the video above, which shows a side-by-side comparison of typing on the Omnia II versus on an iPhone, the way you type with Swype is you literally swipe your finger from one letter to the next as fast as you can. In the video, the Swypist beats the iPhone typist hands down, so to speak. More phones with Swype built in will be launched next year. Will Swype give Android an edge over the iPhone?

100 Incredibly Useful & Free iPad Apps If you just dropped a few hundred dollars on an iPad, you might not have much left in your budget to fill it up with apps. Fortunately, app developers have already stepped up and created a huge collection of completely free iPad apps. Below you’ll find over 100 free iPad apps to help you get started. If you like this roundup, it’s definitely worth taking a look at our all-new roundup of The Top 100 iPad Apps, in addition to our collections of 100 free iPhone apps, and 100 free Mac apps, both of which contain some brilliant software that doesn’t cost a dime! Utilities Air Video Free – Watch your videos anywhere! Alarm Clock with Tunes Free – A state-of-the-art Digital LCD Alarm Clock for your iPad with built-in Alarm Sounds & Buzzer. Big Calculator Free – Big Calculator Free was designed to take full advantage of the iPad screen offering a large display and a paper tape to keep track of your calculations. Color RGB – Need to figure out what color you need for a project? Business Finance

Skype to make group video chat the next killer webcam feature | Starting next week, Skype will begin beta testing a new group video chat feature on Windows PCs, according to the Associated Press. The feature will let up to five people join in on a video chat simultaneously, which is a big leap from Skype’s current limit of two users to a video chat. Group video chat will initially be available for free, but Skype plans to start charging for it within three to four months, along with other new features. The company also plans to bring the feature to Macs later this year. Skype consumer business general manager Neil Stevens said the group video chat feature was one of the most requested by its users. Now webcams are integrated into practically every laptop (including bargain-priced netbooks), and we’ll also be seeing them in smartphones like the HTC Evo 4G and the next-gen iPhone this summer. Skype has also leapfrogged Cisco at bringing the technology to consumers. Are you making or losing money with marketing automation?