Vernor Vinge on the Singularity 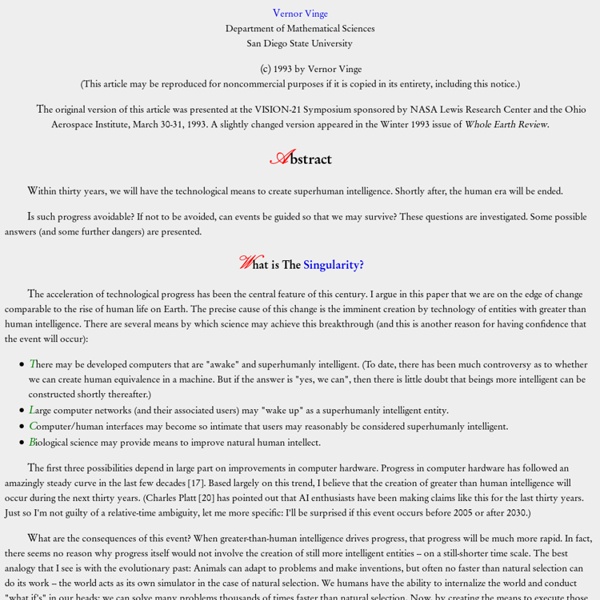 Vernor Vinge Department of Mathematical Sciences San Diego State University (c) 1993 by Vernor Vinge (This article may be reproduced for noncommercial purposes if it is copied in its entirety, including this notice.) The original version of this article was presented at the VISION-21 Symposium sponsored by NASA Lewis Research Center and the Ohio Aerospace Institute, March 30-31, 1993. A slightly changed version appeared in the Winter 1993 issue of Whole Earth Review. Within thirty years, we will have the technological means to create superhuman intelligence. Shortly after, the human era will be ended. Is such progress avoidable? What is The Singularity? The acceleration of technological progress has been the central feature of this century. There may be developed computers that are "awake" and superhumanly intelligent. The first three possibilities depend in large part on improvements in computer hardware. What are the consequences of this event? Can the Singularity be Avoided?

A PROPOSAL FOR THE DARTMOUTH SUMMER RESEARCH PROJECT ON ARTIFICIAL INTELLIGENCE Next: About this document J. McCarthy, Dartmouth College M. Sex Robots: Prostitution As A Science, Not An Art We can relegate this one to the realm of science fiction for the moment, but two researchers from Victoria University of Wellington, New Zealand suggest that in the near future, we could all be looking at a world where prostitution is largely the work of robotic sex companions. Their study, published in the May edition of Futures magazine, is called Robots, men and sex tourism. In their paper they imagine Amsterdam’s red light district in 2050, and say that it will be “all about android prostitues.”

The best visuals to explain the Singularity to senior executives Tomorrow morning I’m doing a presentation to the top executive team of a very large organization on the next 20 years. Most of what I will cover will be general societal, business and technological drivers as well as specific strategic issues driving their business. However as part of stretching their thinking I’ll also speak a about the Singularity. Three Major Singularity Schools : The Singularity Institute Blog I’ve noticed that Singularity discussions seem to be splitting up into three major schools of thought: Accelerating Change, the Event Horizon, and the Intelligence Explosion. Accelerating Change:Core claim: Our intuitions about change are linear; we expect roughly as much change as has occurred in the past over our own lifetimes. But technological change feeds on itself, and therefore accelerates.

» Kure Dining pod Future technology The Kure table can be closed as a sphere (looks like a egg) when not in use. It is designed like a flower that opens up to a full-fledged dining table. The table with sphere lighting rises from the center of the table and the the base glows with blue light. A great concept!! Planetary Alchemy by Alan Smale Let’s fix Mars. Of course, the Red Planet is spectacular just as it is. Images from forty years of Mars missions have revealed its stark beauty and rose-tinted rocky grandeur.