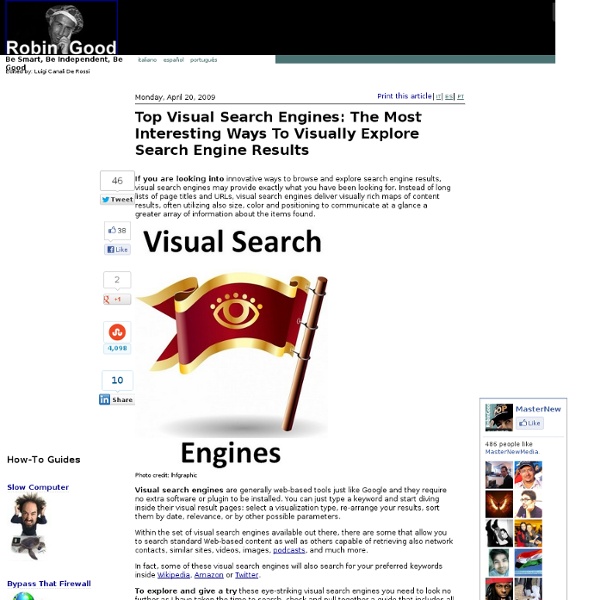 1. Grokker Grokker is a web-based search engine that allows you to explore your results in a visual fashion. Your results are displayed both in a standard outline and in a dynamic map you can interact with. Grokker takes advantage of Yahoo!, Wikipedia, and Amazon Books search engines to perform its queries. Results can be sorted by date, source, domain and refined selecting (or excluding) specific related keywords. Cooliris is a browser extension for Firefox (all platforms), IE (Windows), and Safari (Mac and Windows) that allows you to explore SERPs in a visual fashion.

Aerobot - Machine Learning for Marketing and Social Media When we started taking a look at their customer’s behavioral patterns, we noticed that each one of those customers tended to buy a specific set of products. We found movie fans, who love the 2x1 discount in tickets, a lot of foodies, who tend to pick some specific foods from sushi to barbecue, and others who love shopping, enjoying some great discounts in clothing and accesories. This caused an interesting problem: As the number of users and products grew, the brand started feeling generic and not really tailored to anyone in particular. This posed the question: How do we make each one of those individuals feel identified with the brand?

Photo Pin - About - Add Photos to your Blog the Easy Way PhotoPin helps bloggers find photos for their blog and makes adding them to their post fast and easy. Just search for any topic using the search box (e.g. "Kittens", "Flowers", etc.), preview the photo, and click "get photo" to download the photo as well as the proper attribution link. PhotoPin uses the Flickr API and searches creative commons photos to use for your blog. (Note: we are not associated with Flickr in any way, other than powering our search results using their API.) Carrot2 Carrot2 Search Results Clustering Engine Carrot2 organizes your search results into topics. With an instant overview of what's available, you will quickly find what you're looking for. Choose where to search: Type your query:

Stamen Turns Facebook Sharing Into Intricate Digital Art We’ve all heard the term “viral.” And no one knows the term better than George Takei, a former crew member on the Enterprise who has found a whole new, outspoken identity on Facebook. Whether it’s gay rights or silly meme-riffic photos, his posts sit at the epicenter of hundreds of thousands of shares. But what does all this sharing look like beyond the like button? Facebook tapped data visualization specialists at Stamen to answer that exact question.

Grand Reductions: 10 Diagrams That Changed City Planning In 1902, Ebenezer Howard, an unassuming stenographer and amateur inventor, published one of the most influential visions in the history of city planning, called Garden Cities of To-morrow. In it, Howard created a series of diagrams that helped to establish the orthodoxy of 20th-century city planning. The crisis behind what Howard called the “Garden City idea” — the pollution and overcrowding of the industrial city — is encapsulated in one diagram’s title: “A Group of Smokeless, Slumless Cities.” Howard proposed decentralizing industrial cities by constructing a regionally coordinated series of smaller Garden Cities in the countryside. Linked by railroads and canals and separated by a permanent greenbelt, the Garden Cities would offer the best of both town and country life to their 32,000 residents, including employment in factories and workshops, affordable rents and abundant open space. [2] The Towers in the Park

Does Visualization Really Work? Here’s Evidence That It Does Do you remember a scene in The Matrix when Neo opens his eyes and says “I know Kung Fu”? I bet you wished you could learn that fast. I know I did. I have wonderful news for you. Event visualization in a 3D environment Semantic event tracker (SET) is an interactive visualization tool for analyzing events (activities) in a three-dimensional environment. We model an event as an object that describes an action, its location, time, and relations to other objects. Real world event information is extracted from Internet sources, then stored and processed using Semantic Web technologies that enable us to discover semantic associations between events. We use RDF graphs to represent semantic metadata and ontologies. SET is capable of visualizing as well as navigating through the event data in all three aspects of space, time and theme. Temporal data is illustrated as a 3D multi-line in the 3D environment that connects consecutive events.

Information Visualization for Knowledge Discovery – MAT 595M Seminar Series Speaker: Ben Shneiderman, University of Maryland–College Park Abstract Interactive information visualization tools provide researchers with remarkable capabilities to support discovery. These telescopes for high-dimensional data combine powerful statistical methods with user-controlled interfaces. Bloomin' Apps This page gathers all of the Bloomin' Apps projects in one place.Each image has clickable hotspots and includes suggestions for iPad, Android, Google and online tools and applications to support each of the levels of Bloom's Revised Taxonomy.I have created a page to allow you to share your favorite online tool, iOS, or Android app with others. Cogs of the Cognitive Processes I began to think about the triangular shape of Bloom's Taxonomy and realized I thought of it a bit differently.Since the cognitive processes are meant to be used when necessary, and any learner goes in and out of the each level as they acquire new content and turn it into knowledge, I created a different type of image that showcased my thoughts about Bloom's more meaningfully.Here is my visual which showcases the interlocking nature of the cognitive processes or, simply, the "Cogs of the Cognitive Processes". IPAD APPS TO SUPPORT BLOOM'S REVISED TAXONOMYassembled by Kathy Schrock​ Bloom's and SAMR: My thoughts

45 Ways to Communicate Two Quantities Back in 2010, I was giving a workshop on interactive data visualization in Lima, Perú, discussing whether a dataset has a unique or at least an ideal way to be visualized. For a simple data structure — a list of some hundreds of numbers, for instance — around half of 20 participants were convinced that there’s one way that is clearly better in communicating the data, regardless of the unit of the values, their range, meaning, context and possible aim of the visualization. This discussion actually came out as a consequence of another idea, which resonated with most participants, as well: that there should be a guide that indicates the best way to visualize each possible dataset. So I proposed the following exercise: let’s try to find all possible ways to visualize a ludicrously small data set of two numbers.

Interactive Dynamics for Visual Analysis Graphics Jeffrey Heer, Stanford University Ben Shneiderman, University of Maryland, College Park The increasing scale and availability of digital data provides an extraordinary resource for informing public policy, scientific discovery, business strategy, and even our personal lives. 3 Trends That Will Define The Future Of Infographics Now that everyone loves them, early adopters and forward thinkers want to know what is next for the infographic. Is this just the beginning of a visual revolution, or have they already jumped the shark? This is an important question, especially for those who are making large investments in the medium, such as publishers and marketers.

Taxonomy for interactive visual analysis Interactive visualization continues to grow more useful and prominent in every day analysis. Jeffrey Heer and Ben Shneiderman offer a taxonomy for the budding field . Visualization provides a powerful means of making sense of data. By mapping data attributes to visual properties such as position, size, shape, and color, visualization designers leverage perceptual skills to help users discern and interpret patterns within data. A single image, however, typically provides answers to, at best, a handful of questions. Instead, visual analysis typically progresses in an iterative process of view creation, exploration, and refinement.