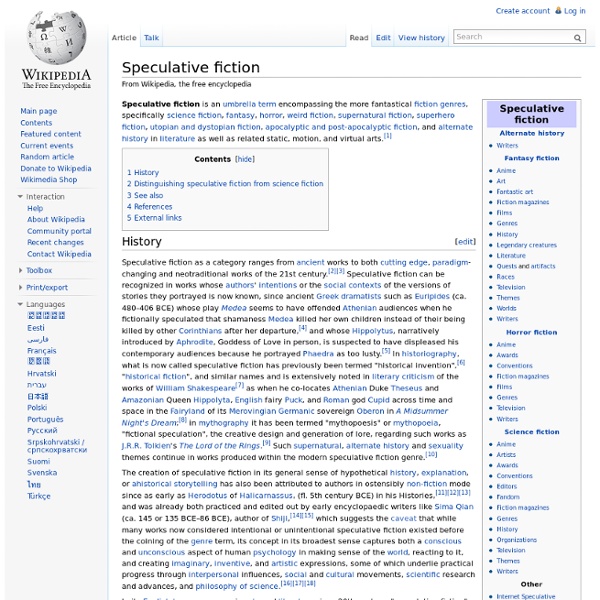 History[edit] In mythography the concept of speculative fiction has been termed "mythopoesis" or mythopoeia, "fictional speculation", the creative design and generation of lore, regarding such works as J.R.R. Tolkien's The Lord of the Rings.[9] Such supernatural, alternate history and sexuality themes continue in works produced within the modern speculative fiction genre.[10] The creation of speculative fiction in its general sense of hypothetical history, explanation, or ahistorical storytelling has also been attributed to authors in ostensibly non-fiction mode since as early as Herodotus of Halicarnassus, (fl. 5th century BCE) in his Histories,[11][12][13] and was already both practiced and edited out by early encyclopaedic writers like Sima Qian (ca. 145 or 135 BCE–86 BCE), author of Shiji.[14][15] In its English language usage in arts and literature since 20th century, "speculative fiction" as a genre term is often attributed to Robert A. Heinlein. See also[edit] History Genres Themes

Materialism Materialism is a form of philosophical monism which holds that matter is the fundamental substance in nature, and that all phenomena, including mental phenomena and consciousness, are the result of material interactions. Materialism is closely related to physicalism; the view that all that exists is ultimately physical. Philosophical physicalism has evolved from materialism with the discoveries of the physical sciences to incorporate more sophisticated notions of physicality than mere ordinary matter, such as: spacetime, physical energies and forces, dark matter, and so on. Thus the term "physicalism" is preferred over "materialism" by some, while others use the terms as if they are synonymous. Overview[edit] Despite the large number of philosophical schools and subtle nuances between many,[1][2][3] all philosophies are said to fall into one of two primary categories, which are defined in contrast to each other: Idealism, and materialism. History[edit] Axial Age[edit] Common Era[edit]

Worldbuilding Worldbuilding or conworlding is the process of constructing an imaginary world, sometimes associated with a whole fictional universe.[1] The resulting world may be called a constructed world. The term "worldbuilding" was popularized at science fiction writers' workshops in the 1970s.[citation needed] Developing an imaginary setting with coherent qualities such as a history, geography, and ecology is a key task for many science fiction or fantasy writers.[2] Worldbuilding often involves the creation of maps, a backstory, and people for the world. Constructed worlds can enrich the backstory and history of fictional works, and it is not uncommon for authors to revise their constructed worlds while completing its associated work. Constructed worlds can be created for personal amusement and mental exercise, or for specific creative endeavors such as novels, video games, or role-playing games. Methods[edit] Elements[edit] The goal of worldbuilding is to create the context for a story.

Dream art Pierre-Cécile Puvis de Chavannes: The Dream, 1883 Dream art is any form of art directly based on material from dreams, or which employs dream-like imagery. History[edit] References to dreams in art are as old as literature itself: the story of Gilgamesh, the Bible, and the Iliad all describe dreams of major characters and the meanings thereof. In European literature, the Romantic movement emphasized the value of emotion and irrational inspiration. At the same time, discussion of dreams reached a new level of public awareness in the Western world due to the work of Sigmund Freud, who introduced the notion of the subconscious mind as a field of scientific inquiry. The invention of film and animation brought new possibilities for vivid depiction of nonrealistic events, but films consisting entirely of dream imagery have remained an avant-garde rarity. Dream material continues to be used by a wide range of contemporary artists for various purposes. Notable works directly based on dreams[edit]

Middle Ages In European history, the Middle Ages, or Medieval period, lasted from the 5th to the 15th century. It began with the collapse of the Western Roman Empire and merged into the Renaissance and the Age of Discovery. The Middle Ages is the middle period of the three traditional divisions of Western history: Antiquity, Medieval period, and Modern period. The Medieval period is itself subdivided into the Early, the High, and the Late Middle Ages. Depopulation, deurbanisation, invasion, and movement of peoples, which had begun in Late Antiquity, continued in the Early Middle Ages. The barbarian invaders, including various Germanic peoples, formed new kingdoms in what remained of the Western Roman Empire. During the High Middle Ages, which began after AD 1000, the population of Europe increased greatly as technological and agricultural innovations allowed trade to flourish and the Medieval Warm Period climate change allowed crop yields to increase. Etymology and periodisation[edit]

Pre-Raphaelite Brotherhood The Pre-Raphaelite Brotherhood (also known as the Pre-Raphaelites) was a group of English painters, poets, and critics, founded in 1848 by William Holman Hunt, John Everett Millais and Dante Gabriel Rossetti. The three founders were joined by William Michael Rossetti, James Collinson, Frederic George Stephens and Thomas Woolner to form the seven-member "brotherhood". The group's intention was to reform art by rejecting what it considered the mechanistic approach first adopted by Mannerist artists who succeeded Raphael and Michelangelo. Beginnings[edit] Illustration by Holman Hunt of Thomas Woolner's poem "My Beautiful Lady", published in The Germ, 1850 Early doctrines[edit] The brotherhood's early doctrines were expressed in four declarations: First exhibitions and publications[edit] Public controversy[edit] Christ In the House of His Parents, by John Everett Millais, 1850 Later developments and influence[edit] After 1850, Hunt and Millais moved away from direct imitation of medieval art.

Gothic Revival architecture Gothic Revival (also referred to as Victorian Gothic, Neo-Gothic or Jigsaw Gothic, and when used for school, college, and university buildings as Collegiate Gothic) is an architectural movement that began in the late 1740s in England. Its popularity grew rapidly in the early 19th century, when increasingly serious and learned admirers of neo-Gothic styles sought to revive medieval Gothic architecture, in contrast to the neoclassical styles prevalent at the time. Gothic Revival architecture often has certain features,derived from the original Gothic architecture style, including decorative patterns, finals, scalloping, lancet windows, hood moldings and label stops. Relation to other cultural movements[edit] The Gothic Revival was paralleled and supported by "medievalism", which had its roots in "antiquarian' concerns with survivals and curiosities. Survival and revival[edit] A younger generation, taking Gothic architecture more seriously, provided the readership for J.

Romanticism Defining Romanticism[edit] Basic characteristics[edit] Defining the nature of Romanticism may be approached from the starting point of the primary importance of the free expression of the feelings of the artist. The importance the Romantics placed on untrammelled feeling is summed up in the remark of the German painter Caspar David Friedrich that "the artist's feeling is his law".[7] To William Wordsworth poetry should be "the spontaneous overflow of powerful feelings".[8] In order to truly express these feelings, the content of the art must come from the imagination of the artist, with as little interference as possible from "artificial" rules dictating what a work should consist of. Not essential to Romanticism, but so widespread as to be normative, was a strong belief and interest in the importance of nature. However this is particularly in the effect of nature upon the artist when he is surrounded by it, preferably alone. The term[edit] The period[edit] Romantic literature[edit]

Medievalism Medievalism is the system of belief and practice characteristic of the Middle Ages, or devotion to elements of that period, which has been expressed in areas such as architecture, literature, music, art, philosophy, scholarship, and various vehicles of popular culture.[1] Since the 18th century, a variety of movements have used the medieval period as a model or inspiration for creative activity, including Romanticism, the Gothic revival, the Pre-Raphaelite and arts and crafts movements and neo-medievalism (a term often used interchangeably with medievalism). Medievalism can also be used as an insult, implying conservatism and outdated attitudes. The words "medievalism" and "Medieval" are both first recorded in the 19th century. "Medieval" is derived from Latin medium aevum (Middle Ages). This term comes from the idea the Middle Ages was an interruption in the advance of classical learning. History[edit] Renaissance to Enlightenment[edit] Romanticism[edit] The Nazarenes[edit]

Supernatural The supernatural (Medieval Latin: supernātūrālis: supra "above" + naturalis "nature", first used: 1520–30 AD)[1][2] is that which is not subject to the laws of physics, or more figuratively, that which is said to exist above and beyond nature. In philosophy, popular culture and fiction, the supernatural is associated with the paranormal, religions and occultism. It has neoplatonic[3] and medieval scholastic[4] origins. In Catholicism[edit] Catholic theologians sometimes call supernatural the miraculous way in which certain effects, in themselves natural, are produced, or certain endowments (like man's immunity from death, suffering, passion, and ignorance) that bring the lower class up to the higher though always within the limits of the created, but they are careful in qualifying the former as accidentally supernatural (supernaturale per accidens) and the latter as relatively supernatural (prœternaturale). Process theology[edit] Contrasting views[edit] indistinct from nature.