Things My Father Didn’t Teach Me 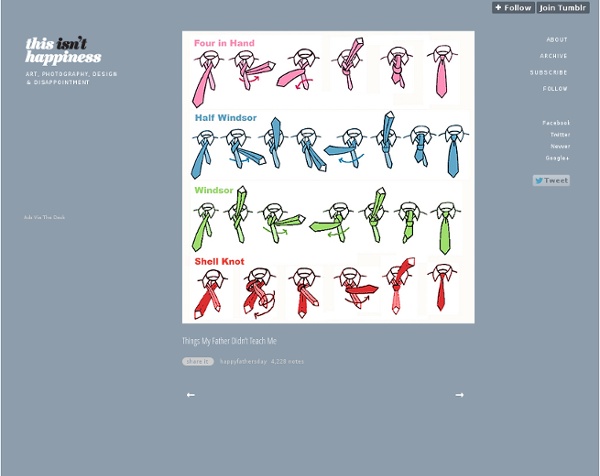 Camping Knots for Wilderness Survival By Filip Tkaczyk Knowing how to tie good camping knots is an invaluable skill in wilderness survival situations. Its also a great asset when having fun in the outdoors. Square Knot Also called a reef knot, this knot is useful for tying bandages, packages and joining shorter pieces of rope together. To begin, lay the ends of the ropes parallel and then pick up a rope in each hand. Now tie an overhand knot as you would for tying your shoe laces by putting the right end under and over the left rope end. Then tie another overhand knot, this time putting the left end under and over the right rope. Completed Square Knot Clove Hitch Like all hitches, this camping knot ties a rope to an object. To begin, bring the rope end over and under the post. Now, bring the rope end around a third time, and tuck it under the center of the X. Tighten by pulling the end and the main line apart. Bowline One of the most important camping knots to learn is the bowline knot. Related Courses:

infoverse - octomatics New plastic becomes stronger when stressed, drop-proof smartphones incoming Plastics are amazingly versatile materials, and their usage in all manner of objects is only increasing. Virtually everything you own is at least partially composed of plastic, and that’s usually a very good thing. Plastic is light, inexpensive, and can be molded in any shape. However, it’s not always the strongest material. Many smartphone owners know the sorrow of dropping a phone and finding the fall cracked or chipped the casing. A new type of plastic developed at Duke University could change all that. The carefully designed molecular structure of the material is what gives it this unusual property. When the polymer chains are tugged or experience shock, they tear on one side. The researchers included a molecule called a carboxylate in this plastic to utilize those bonding sites. The Duke team conducted a variety of tests to ensure this new mechanophore was actually making new bonds consistently. This isn’t just a cool science experiment, though.

"The egg" - Page 11 You were on your way home when you died. It was a car accident. Nothing particularly remarkable, but fatal nonetheless. You left behind a wife and two children. It was a painless death. The EMTs tried their best to save you, but to no avail. And that’s when you met me. “What… what happened?” “You died,” I said, matter-of-factly. “There was a… a truck and it was skidding…” “Yup,” I said. “I… I died?” “Yup. You looked around. “More or less,” I said. “Are you god?” “Yup,” I replied. “My kids… my wife,” you said. “What about them?” “Will they be all right?” “That’s what I like to see,” I said. You looked at me with fascination. “Don’t worry,” I said. “Oh,” you said. “Neither,” I said. “Ah,” you said. “All religions are right in their own way,” I said. You followed along as we strode through the void. “Nowhere in particular,” I said. “So what’s the point, then?” “Not so!” I stopped walking and took you by the shoulders. “How many times have I been reincarnated, then?” “Oh lots. “Wait, what?” “Sure.

What Is This? Mysterious Amazon Web Baffles Scientists A bizarre-looking web structure has been found in the Peruvian Amazon, and apparently nobody knows what it is, not even scientists. The strange formation resembles a tiny spire surrounded by a webby picket fence and is about 2 centimeters (0.8 inches) wide. Georgia Tech graduate student Troy Alexander first spotted one of these on the underside of a tarp near the Tambopata Research Center in the Peruvian Amazon. At first he thought it might have been an aborted moth cocoon, he wrote on Reddit. But then he found several more, all of which looked quite similar. He posted the photos to Reddit and asked other scientists to help him out, besides making queries around the Tambopata Research Center, to no avail. Chris Buddle, an arachnologist at McGill University, said that neither he nor any of his associates know what it is. "I have no idea what animal made that," Norman Platnick, curator emeritus of spiders at the American Museum of Natural History in New York, told LiveScience.

Home Page Do what thou wilt shall be the whole of the Law. E-Books 8 Ball - Ask a Question - Click Here Cast Thermite So you made it through the intro? Good. There's something that must be said before we go any further. Now that that's out of the way, onto the fun part. The first thing to do is understand what thermite is made up of. What we need: Fine (0000) Steel Wool (not pictured)AluminumSome kind of scalePlaster of ParisHandling materials (spoon, cup, paper, coffee can...)Some kind of mold to cast your thermite inWhile I'm at it, I'll explain the best way to get a hold of the materials. Steel WoolOff to the hardware store! Finally, you say.

Focus Focus on the Red Dot and give us a like if the blue circle disappeared. This is a practical demonstration of the word 'focus'; when you focus on a thing, the remaining thoughts and objects should disappear. 6 Unconventional Uses for your Dishwasher - DishwashersInfo.com It takes the right mix of ingenuity and desperation to discover new uses for old tools, but whoever first tried steaming a salmon fillet in their dishwasher must’ve been drunk. For folks who are curious about what else their kitchen contraptions can do, here’s a rundown of the most unconventional uses for your home dishwasher. Steam Fish Fillets The best part about steaming fish in your dishwasher—other than novelty of steaming fish in your dishwasher—is how simple it is. All you need to do is season a cut of your favorite fish, wrap it (tightly!) If you’re feeling extra adventurous, check out these recipes for dishwasher lasagna and dishwasher potatoes. Wash Baseball Caps Baseball caps can fade and become misshapen in traditional washing machines. For fledgling roller derby enthusiasts, you can also clean knee pads, shin guards, and other sports equipment in your dishwasher. Clean Footwear Okay, so maybe this is crossing the line, but some people aren’t weirded out by feet. Wash Tools