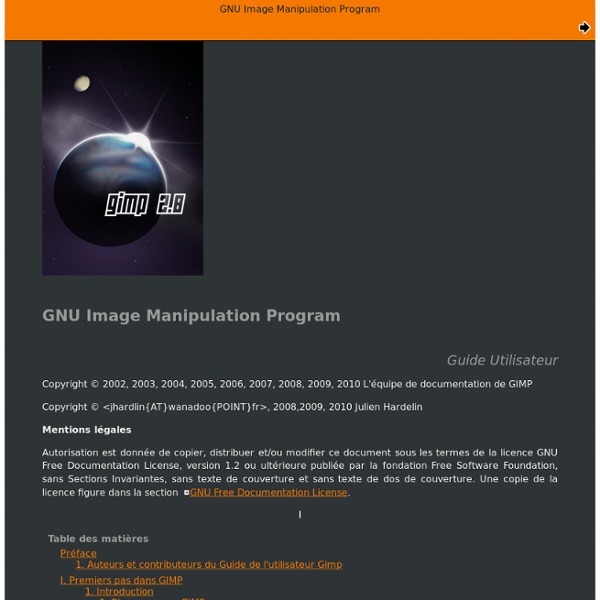 Development How You Can Help GIMP is Free Software and a part of the GNU Project. In the free software world, there is generally no distinction between users and developers. As in a friendly neighbourhood, everybody pitches in to help their neighbors. Please consider the time you give in assistance to others as payment. Ways in which you can help: program new features, report bugs (errors in the program), debug existing features, add documentation, translate GIMP to your own language, translate the documentation, write tutorials, participate in the UI brainstorm, improve this web site, make artwork for GIMP used in or with GIMP, let people know you used GIMP for your artwork, give away copies of GIMP, help others to learn to use GIMP, etc. As you can see, anyone can help. Development Status The team is currently busy working on v2.10. Porting internals of GIMP to GEGL is mostly done, but more plugins have to be ported to GEGL, and GEGL needs to be made faster. Bug Reports Web Development Hacking

Downloads Current Stable Version The current stable release of GIMP is 2.8.18 (2016-07-14). We think your OS is Ubuntu. Show downloads for GNU/Linux | OS X | Microsoft Windows | All GIMP for Unix-like systems It's very likely your Unix-like system such as a GNU/Linux distribution already comes with a GIMP package. GIMP can also run on Solaris and is available for the BSD family of systems such as FreeBSD and OpenBSD. Please refer to the documentation for your Unix-like system on the installation of software. GIMP for Mac OS X Download GIMP 2.8.18 via BitTorrent Download GIMP 2.8.18 directly The download links above will attempt to download GIMP from one of our trusted mirror servers. Since the 2.8.2 version, GIMP runs on OSX natively. Native build The official GIMP 2.8 DMG installer (linked above) is a stock GIMP build without any add-ons. The MD5 hash sum for gimp-2.8.18-x86_64.dmg is: 76858c813e9974b187edfd71ce6d83c6506d6a3c. Older Downloads Macports A (easy?) Download Macports Homebrew Download Homebrew Fink

Feature Overview GIMP is a versatile graphics manipulation package. This page should help you get a taste of what GIMP is capable of. You can also have a look at our introduction page or browse through the tutorials. Customizable Interface Each task requires a different environment and GIMP allows you to customize the view and behavior the way you like it. GIMP features a great fullscreen mode allowing you to not only preview your artwork but also do editing work while using the most of your screen estate. Photo Enhancement Numerous digital photo imperfections can be easily compensated for using GIMP. The included channel mixer gives you the flexibility and power to get your B/W photography stand out the way you need. Digital Retouching GIMP is ideal for advanced photo retouching techniques. Hardware Support GIMP includes a very unique support for various input devices out of the box. File Formats Supported Platforms GNU/Linux (i386, PPC) Microsoft Windows (XP, Vista) Mac OS X Sun OpenSolaris FreeBSD

GIMP User FAQ - Frequently Asked Questions This FAQ is still a work in progress. Some sections are very outdated, other sections should probably be removed, and some new questions and answers should be added. Please contact us if you can improve it. General Information What is this GIMP? The “GNU Image Manipulation Program” (originally the General Image Manipulation Program) sired by Spencer Kimball & Peter Mattis. In their own words, “GIMP is our answer to the current lack of free (or at least reasonably priced) image manipulation software for GNU/Linux and UNIX in general.” It is a raster editor, which means that it performs operations directly on the pixels that make up the image, and not a vector editor. Where do I get it? Most (if not all) GNU/Linux distributions will support GIMP through their package management systems and may even come with GIMP preinstalled. Why and when was GIMP changed from “general image manipulation program” to “GNU image manipulation program”? GIMP is a stupid name. Is GIMP a GNOME application? Yes. Yes.

Documentation GNU Image Manipulation Program Skip to page contents [ News | Screenshots | Features | Downloads | Documentation | Get Involved ][ Plug-in Registry | GIMP Development ] [ Donations ] [ Documentation GIMP User Manual GIMP comes with a built-in help system. The user manual for the GIMP 2.8 release is available in several languages: Tutorials Tutorials on gimp.org Books Books about GIMP GIMP User FAQ Frequently Asked Questions Configuration GIMP Manual Pages GIMP Documentation for Developers and Script Authors Configuration - How To Set Your Tile Cache Quick summary for those who do not want to read all this: if your system has good swapping behavior (like most GNU/Linux systems) and if you have enough virtual memory (swap), then set the tile cache size as high as possible. If not, then set it to about 80% of the available RAM on your system. If you are not satisfied with this quick advice, then keep on reading... Image processing can require a lot of memory. GIMP uses the operating system services to handle memory, up to a given point, past which it uses its own system so it does not eat all system memory resources. This system consists in sending old data to files in the disk. A low value means that GIMP sends data really quickly to disk, not making real use of the avaliable RAM and making the disks work without real reason. How to choose a number for Tile Cache? There are some ways to decide what value to use as Tile Cache, as well as some tricks: Forget about this and hope the default works. What number to use for Tile Cache?

Configuration - Fonts in GIMP GIMP 2.x handles a variety of font formats, most notably TrueType, OpenType and Type1. Adding Fonts for GIMP 2.x System-Wide Most distributions will propose a large choice of fonts in their package manager. The easier is usually to install them this way. In case you want to manually add third-party fonts (commercial, downloaded...), adding fonts is usually just a matter of moving font files into a directory that is searched by the font system. Some distributions also propose a graphical tool allowing to install fonts from third-party without bothering about the specifics. Fonts added this way will be available to all applications using the Fontconfig system (such as GIMP). For GIMP only You might want to install fonts for use with GIMP only or you might not have permissions to install fonts system-wide. Internal Mechanics This section is mostly informational, for users or developers who want to know more about under-the-hood font handling in GIMP 2.x. Known Problems GIMP cannot see my X fonts

Configuration - Controlling GIMP with MIDI devices What? Since version 2.2, GIMP comes with a module that allows to control it using MIDI devices. Currently this is only supported on GNU/Linux with either the OSS or the ALSA sound drivers. It might work on other platforms as well if there is a way to access the raw MIDI stream by opening a device. Enabling the MIDI Module To make the UI of GIMP's MIDI controller visible you need to edit a configuration file when GIMP is not running. (GimpControllerInfo "MIDI" (enabled yes) (debug-events yes) (controller "ControllerMidi" (device "alsa") (channel -1)) (mapping)) Then start GIMP from a shell (so that you can see textual output we need later), open the preferences, go to the "Input Controllers" page in the "Input Devices" section and select the newly appeared "MIDI" Tab. Configuring the MIDI Source Enter "alsa" in the "Device" entry in the configuration. The Open Sound System provides a device file for the raw MIDI events. The MIDI channel Assigning Actions to Events Have fun.