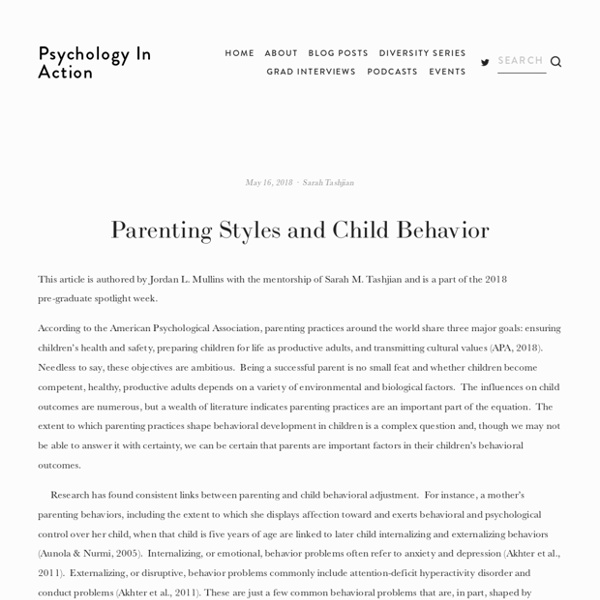 More extensive research is critical to enhancing the field’s current understanding of parenting styles and the role they play in child behavioral outcomes. An increased understanding of the roots of different parenting practices, may enable the field to more effectively address the environmental factors that lead parents to adopt less ideal strategies. This research should be used to guide the development of more effective prevention and intervention programs aimed at fostering adaptive behavioral development in children. Because parenting programs have been found to demonstrate a large and sustained effect on early disruptive behavior problems (Comer et al., 2013), it is important to ensure these programs are widely available to at-risk families, and that these families are aware of their availability. Jordan L. Mullins graduated from the University of California, Davis, in 2017 with a B.A. in Psychology and a double minor in Spanish and Human Development. References Calzada, E.

4 Types of Parenting Styles and Their Effects on Kids Your parenting style can affect everything from how much your child weighs to how she feels about herself. It's important to ensure your parenting style is supporting healthy growth and development because the way you interact with your child and how you discipline her will influence her for the rest of her life. Researchers have identified four types of parenting styles:1 Authoritarian parenting: What happens to the kids? Photo by CEphoto, Uwe Aranas © 2010-2017 Gwen Dewar, Ph.D., all rights reserved The authoritarian parenting style is about being strict and stern. It insists on unquestioning obedience, and enforces good behavior through threats, shaming, and other punishments. As defined by psychologists, it's also a style associated with less parental warmth and responsiveness (Baumrind 1991).

Permissive Parenting (Characteristics and Effects) Permissive parenting is a type of parenting style characterized by low demands with high responsiveness. Permissive parents tend to be very loving, yet provide few guidelines and rules. These parents do not expect mature behavior from their children and often seem more like a friend than a parental figure.

Parental Identity and Its Relation to Parenting and Psychological Functioning in Middle Age: Parenting: Vol 16, No 2 Starting in adolescence, a gradual change takes place from being a recipient of care to being a provider. Such development requires a change in the view of oneself in the world (Erikson, 1959 Erikson, E. H. (1959). Identity and the life cycle. (Psychological Issues Monograph No. 1). New York, NY: Norton. The authoritarian parenting style: What does it look like? © 2010-2018 Gwen Dewar, Ph.D., all rights reserved The authoritarian parenting style: Little nurturing, lots of psychological control You might have a good handle on what it means to favor authoritarian government: The blind submission to authority.

Authoritative Parenting (Characteristics and Effects) Authoritative parenting is characterized by reasonable demands and high responsiveness. While authoritative parents might have high expectations for their children, they also give their kids the resources and support they need to succeed. Parents who exhibit this style listen to their kids and provide love and warmth in addition to limits and fair discipline. This approach to parenting avoids punishment and threats and instead relies on strategies such as positive reinforcement. Brief History

When Parents Clash: Managing Differences in Parenting Style Many aspects of a person’s life can influence their parenting style. The way an adult was parented, as well as parenting books and other guides, are a few factors. A parent’s unique fears and hopes for their child are another major influence. Cultural factors, such as gender roles, the community in which the family lives, religion, politics, socioeconomic status, and ethnic norms also play a role. When parenting styles clash, children get inconsistent messages from their parents. This can cause confusion in children about how to act and what to expect in response to their behavior.

The Definition of Authoritarian Parenting Authoritarian parenting is a parenting style characterized by high demands and low responsiveness. Parents with an authoritarian style have very high expectations of their children, yet provide very little in the way of feedback and nurturing. Mistakes tend to be punished harshly. When feedback does occur, it is often negative. Uninvolved Parenting (Characteristics and Effects) Uninvolved parenting, sometimes referred to as neglectful parenting, is a style characterized by a lack of responsiveness to a child's needs. Uninvolved parents make few to no demands of their children and they are often indifferent, dismissive, or even completely neglectful. The Major Parenting Styles During the 1960s, psychologist Diana Baumrind described three different parenting styles based on her research with preschool-age children: authoritarian, authoritative, and permissive parenting. In later years, researchers added a fourth style known as uninvolved parenting.

How to Cope With Parenting Differences With the demise of "Brangelina" being attributed, at least in part, to disagreements about parenting, you may be wondering if your own marriage or relationship is at risk. Differences in parenting is an area where many couples struggle, and it can lead to divorce or living with resentment when it goes unresolved. Do you think your partner is too strict, not engaged enough, or inconsistent when it comes to parenting? Do you fight about it? The authoritative parenting style: An evidence-based guide © 2010 - 2017 Gwen Dewar, Ph.D., all rights reserved What is authoritative parenting? The authoritative parenting style is an approach to child-rearing that combines warmth, sensitivity, and the setting of limits.

Parenting styles: An evidence-based guide Parenting styles: An evidence-based guide © 2010-2018 Gwen Dewar, Ph.D., all rights reserved The concept of parenting styles was first introduced by Diane Baumrind to explain differences in the way parents attempt to control and socialize their children. Why Parenting Styles Matter When Raising Children Developmental psychologists have long been interested in how parents affect child development. However, finding actual cause-and-effect links between specific actions of parents and later behavior of children is very difficult. Some children raised in dramatically different environments can later grow up to have remarkably similar personalities. Culturally Responsive Parenting Parents are a child’s first teachers Parents are a child’s first teachers, and a nurturing relationship between a parent and child supports optimal early childhood brain development.1 Children develop in an environment of relationships, and the environment into which a child is born and the type of parenting that she receives have a major effect on her later development and well-being.2 The influence of these early relationships and environments becomes evident the nature of the attachment that develops between a child and her parents. Attachment refers an infants’ ability to form a trusting relationship with his mother or primary caregiver. Healthy attachment, in turn, establishes a strong foundation from which a child can explore the world, safe in the knowledge that they can count on safety and care from their parents.