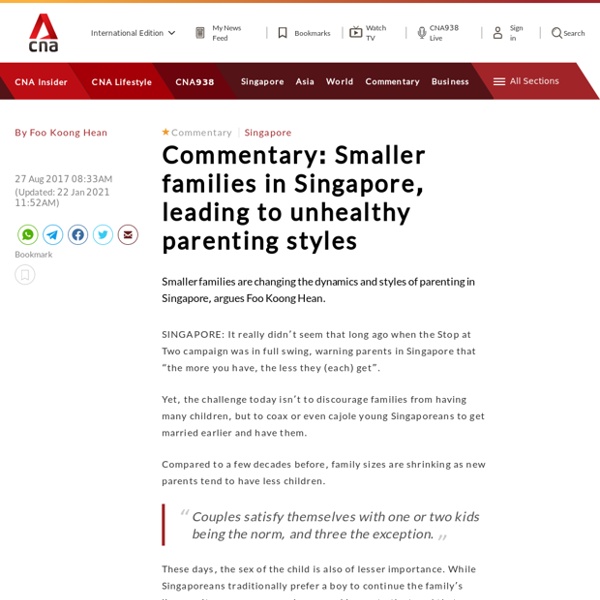 SINGAPORE: It really didn’t seem that long ago when the Stop at Two campaign was in full swing, warning parents in Singapore that “the more you have, the less they (each) get”. Yet, the challenge today isn’t to discourage families from having many children, but to coax or even cajole young Singaporeans to get married earlier and have them. Compared to a few decades before, family sizes are shrinking as new parents tend to have less children. Couples satisfy themselves with one or two kids being the norm, and three the exception. These days, the sex of the child is also of lesser importance. While Singaporeans traditionally prefer a boy to continue the family’s lineage, it seems more couples are waking up to the trend that daughters make more caring, homely and reliable caregivers in their old age. Family dynamics are also shifting, as families get smaller. Those who shower love and affection excessively, unknowingly nurture an unhealthy symbiotic relationship between parent and child.

Related:  4 Types of Parenting Styles and Their Effects on Children • How To Parent Teenage Children: Reinforcement and Punishment • 4 parenting styles • The Four Parenting Styles

Example of tailoring parenting style to individual child "At the time, I chafed at such rigid structures... Yet, looking back, I realise how this sort of parenting helped me become the person I am today. The supervision, discipline and structure helped give me a form of security in my life."

How Tiger Moms and hovering parents can damage a child’s ability to cope with life’s challenges Even if you were horrified at the idea of hovering over your child as Amy Chua did in her polarising 2011 bestseller Battle Hymn of the Tiger Mother, I’m betting there was a part of you that looked at her perfect children with at least a tinge of envy. As portrayed in the book, Chua’s magic formula of no play dates, no TV and always being No. 1 in everything (except for gym and drama, of course) ended up producing two girls who were straight-A students and who also were wildly talented in music. Oh, and they both ended up going to Harvard University. Critics predicted that daughters Sophia and Lulu would end up being “mentally ill, friendless robots”, according to a recent “where are they now” profile in The Telegraph in the UK.

What Is Permissive Parenting? - Experts Explain Permissive Parenting While permissive parents are often very responsive and loving, this parenting style is defined by having no rules.The term was developed by psychologist Diana Baumrind, who studied preschoolers and found their parents mostly fit into three main parenting styles: authoritative parenting, authoritarian parenting, and permissive parenting. (A fourth parenting style, neglectful parenting, was added later to address extremely uninvolved and emotionally distant parents.) Studies show children of permissive parents are more likely to show signs of anxiety and depression, aggression, have bad social skills, and do poorly in school. Permissive parenting can be bad for child development. Many Singaporeans’ parenting style not helping children succeed - TODAYonline I was disturbed to read the report “MP proposes piloting cluster of schools without exams, streaming” (Jan 22). In the current debate on how best to restructure the education system, more people seem inclined to wash the outside of a dirty cup and call it clean, but leaving the inside filthy as ever. An examination-free education system would serve only to mask the inadequacies of the current generation of pupils, rather than help them to succeed.

How to Be Happy With Yourself as a Teen: 10 Steps wikiHow is a “wiki,” similar to Wikipedia, which means that many of our articles are co-written by multiple authors. To create this article, 15 people, some anonymous, worked to edit and improve it over time. This article has been viewed 43,630 times. Co-authors: 15 Updated: February 7, 2020 Why Parenting Styles Matter When Raising Children Developmental psychologists have long been interested in how parents affect child development. However, finding actual cause-and-effect links between specific actions of parents and later behavior of children is very difficult. Some children raised in dramatically different environments can later grow up to have remarkably similar personalities. Conversely, children who share a home and are raised in the same environment can grow up to have very different personalities.

Parenting Style Quiz What does it take to be a good parent? Literature on parenting identifies four main styles: Authoritative, Authoritarian, Permissive and Uninvolved. These are based on the extent to which parents are responsive (offer warmth and support) and demanding (level of behavioral control). Research has shown that a failure to balance these two key aspects of parenting can have very harmful effects on children and their future conduct. Children who grow up in households where there is too much or too little of one trait (or even worse, no recognizable presence of either), tend to have difficulty with social adjustment and often show poor academic performance.

The relentlessness of modern parenting - TODAYonline NEW YORK — Parenthood in the United States has become much more demanding than it used to be. Over just a couple of generations, parents have greatly increased the amount of time, attention and money they put into raising children. Mothers who work outside the home spend just as much time tending their children as stay-at-home mothers did in the 1970s. The amount of money parents spend on children, which used to peak when they were in high school, is now highest when they are under 6 and over 18.

More parents seeking help to manage their children, Latest Singapore News - The New Paper This article is more than 12 months old New Beyond Parental Control (BPC) cases have gone up, even as new admissions to the youth homes run by the Ministry of Social and Family Development (MSF) fell to a 15-year low last year. There were 85 new BPC cases last year, the most since 2009, according to preliminary MSF numbers. Parents and caregivers can apply for a BPC order to get help to manage children with behavioural problems. Not all children in such cases are admitted to a youth home, as they may be referred for counselling, given a caution or placed under supervision instead. Of the cases last year, 58 complaints were filed against girls, and 27 against boys. Mother's permissive parenting harmed sons, court rules in custody battle A woman has lost custody of her two sons after a judge said she had "significantly failed" the children through permissive parenting, accepting the argument that she acted "more like a friend than a parent" to the two boys. The judge Laura Harris ruled that the boys, aged 11 and 14, should live with their father, who had "demonstrated far better insight" into their needs and who was more in favour of "structure, boundaries and discipline". The boys' behaviour towards adults showed a lack of discipline and structure, said Harris. "I consider the mother's parenting has been permissive, and, although the court must be tolerant of different standards of parenting, I consider the permissive parenting in this case has caused the children harm."

Related:
Related:  4 Types of Parenting Styles and Their Effects on Children   -  How To Parent Teenage Children: Reinforcement and Punishment   -  4 parenting styles   -  The Four Parenting Styles