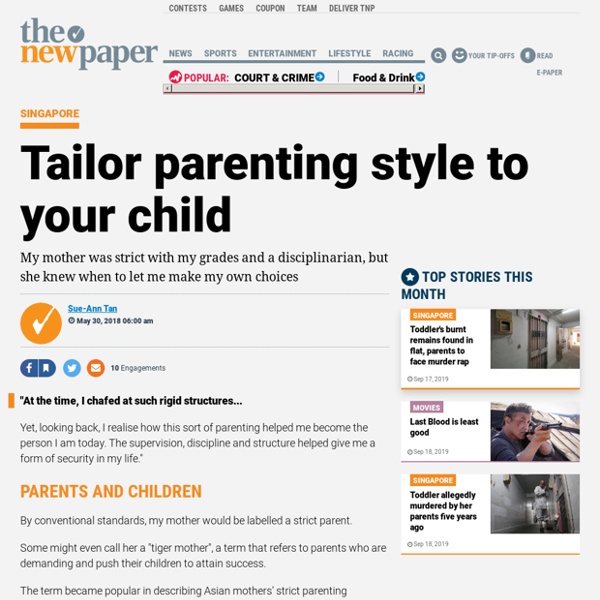 "At the time, I chafed at such rigid structures... Yet, looking back, I realise how this sort of parenting helped me become the person I am today. The supervision, discipline and structure helped give me a form of security in my life." By conventional standards, my mother would be labelled a strict parent. Some might even call her a "tiger mother", a term that refers to parents who are demanding and push their children to attain success. The term became popular in describing Asian mothers' strict parenting techniques, after author Amy Chua published her autobiography Battle Hymn Of The Tiger Mother in 2011. My mother was always concerned with my grades. Before any Chinese exam, she would spend hours going over all the vocabulary words with me, emphasising that I could not get a single stroke of the characters wrong. She did all this, even though she barely spoke Mandarin and also struggled with the language in school. At the time, I chafed at such rigid structures... She gave it everything.

Related:  Parenting Styles • What is your parenting style?

Many Singaporeans’ parenting style not helping children succeed - TODAYonline I was disturbed to read the report “MP proposes piloting cluster of schools without exams, streaming” (Jan 22). In the current debate on how best to restructure the education system, more people seem inclined to wash the outside of a dirty cup and call it clean, but leaving the inside filthy as ever. An examination-free education system would serve only to mask the inadequacies of the current generation of pupils, rather than help them to succeed. While some of the pressure they face is due to the existing system, my experience as an educator tells me that the root problem lies with the quality of young people now. Born into a world where advanced technology is at their fingertips, our children are accustomed to having everything quickly and with little effort.

Psychology Today Singapore From reading to infants to helping with schoolwork to enunciating values as the child grows, parents exert enormous influence over their children's development, success, and overall happiness. They are, however, not the only influences—especially after children enter school and begin interacting with the world at large. It's especially important that parents work to give children the best start possible, but it's also important for parents to recognize that kids come into the world with their own temperaments, personalities, and goals.

Tiger mums, helicopter parents and modern child-rearing angst, Opinion News Growing up in the 1960s and 70s, I had what could be accurately called a carefree childhood. Mostly I was left to my own devices to entertain myself. I wasn't taught to read or write until I went to primary school nor was I enrolled in a kindergarten; I think now it was because my parents couldn't afford the additional expense (there were already four other children at school) and they probably felt that it was unnecessary. A few months into Primary 1, my form teacher asked to see my mother: She'd thought that I might be intellectually impaired. My mother listened passively to her and when we got home, she didn't say a word about this to me then and never after.

Parenting Style Quiz Instructions: This quiz is designed to help you better understand your parenting style. For each item, indicate how much you agree or disagree with the statement. This takes most people about 4 minutes to complete. Take your time and answer truthfully for the most accurate results. How Tiger Moms and hovering parents can damage a child’s ability to cope with life’s challenges Even if you were horrified at the idea of hovering over your child as Amy Chua did in her polarising 2011 bestseller Battle Hymn of the Tiger Mother, I’m betting there was a part of you that looked at her perfect children with at least a tinge of envy. As portrayed in the book, Chua’s magic formula of no play dates, no TV and always being No. 1 in everything (except for gym and drama, of course) ended up producing two girls who were straight-A students and who also were wildly talented in music. Oh, and they both ended up going to Harvard University. Critics predicted that daughters Sophia and Lulu would end up being “mentally ill, friendless robots”, according to a recent “where are they now” profile in The Telegraph in the UK. Instead, they ended up being “polite, modest and thoughtful” as well as successful, the article says, and they remember their childhood as tough – but happy. But are the sisters the norm or exception to this type of parenting?

Parenting Quiz - Active Parenting Differences in parenting styles are a problem for both parents and children. At the least, it invites kids to play one parent against the other in a smart attempt to get the answer that they want to hear. This is not the child’s fault. After all, a child is just using good common sense! However, it does create a situation in which rules are not clear or consistently enforced, which is bad for the child as well as for the parent. Thanks mum for not being a helicopter parent SINGAPORE: Growing up, my mother, who worked a 12-hour shift in retail, wasn’t a prominent figure at home. The only times my siblings and I saw her were before school and just before bed. Our dad who worked “regular” hours was around more. Still, she was fully involved in our childhood. Before leaving for work, she’ll prepare lunch for us to eat after school. At work, she answered our calls – even for a short while.

Tyrant toddlers: We're raising a generation of entitled children and it needs to stop - The Pride Last weekend at a local heartland mall, my girlfriend and I saw something that deeply furrowed our brows. This little girl who couldn’t be any more than six years old was standing in front of a mirror ordering her helper around. “Take the soap for me. Wash my hands,” she demanded sternly. Are you a helicopter parent? - TODAYonline SINGAPORE — There has been quite a lot of talk about "helicopter parenting", or cosseting, in recent years - so much so that the Ministry of Education (MOE) even shared a post about it on Facebook earlier this month. The post linked to an article on MOE's online publication, Schoolbag.sg, which contained illustrations and examples of "helicoptering". These include situations such as bargaining with the child's teacher to give him one more mark so the child can go one grade up, doing the child's project for him instead of letting him do it himself, and "flying" to school with the child's homework when he forgets to bring it with him. But what is the exact definition of helicopter parenting? Dr Lim Boon Leng, a psychiatrist at Gleneagles Hospital, calls the phenomenon "a maladaptive type of parenting" in which the parent is "overprotective, hovers around the child, and gets involved in his affairs and activities excessively". The MOE added some cautionary remarks on its website.

Uninvolved Parenting Style - Traits And Effects on Children Uninvolved or neglectful parenting is a considerably new parenting style that does away with hand-holding and guiding the children. It lets them learn by themselves. Parents could be uninvolved in varying degrees. Characteristics and Effects of Uninvolved Parenting Uninvolved parenting, sometimes referred to as neglectful parenting, is a style characterized by a lack of responsiveness to a child's needs. Uninvolved parents make few to no demands of their children and they are often indifferent, dismissive, or even completely neglectful. The Major Parenting Styles During the 1960s, psychologist Diana Baumrind described three different parenting styles based on her research with preschool-age children: authoritarian, authoritative, and permissive parenting. In later years, researchers added a fourth style known as uninvolved parenting.

What Is Permissive Parenting? Permissive parenting is a type of parenting style characterized by low demands with high responsiveness. Permissive parents tend to be very loving, yet provide few guidelines and rules. These parents do not expect mature behavior from their children and often seem more like a friend than a parental figure. These parents tend to be the polar opposite of the so-called "helicopter parents." Instead of hovering over their children's every move, permissive parents are incredibly lax and rarely make or enforce any type of rules or structure. Their motto is often simply that "kids will be kids."

The Definition of Authoritarian Parenting Authoritarian parenting is a parenting style characterized by high demands and low responsiveness. Parents with an authoritarian style have very high expectations of their children, yet provide very little in the way of feedback and nurturance. Mistakes tend to be punished harshly.

Related:
Related:  Parenting Styles   -  What is your parenting style?