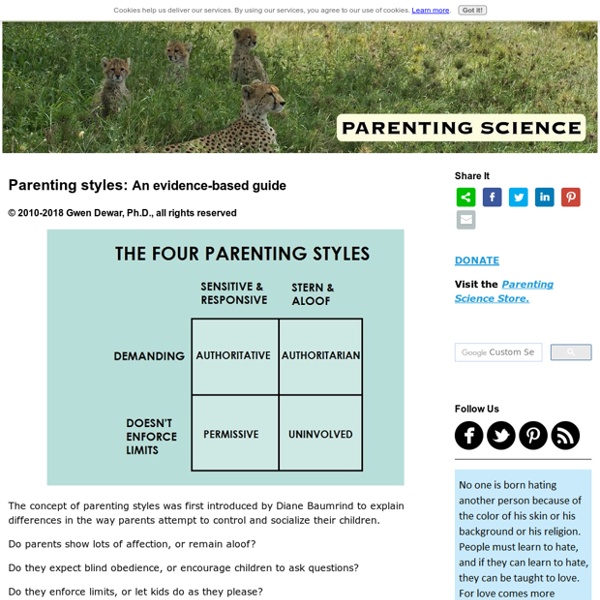 Parenting styles: An evidence-based guide © 2010-2018 Gwen Dewar, Ph.D., all rights reserved The concept of parenting styles was first introduced by Diane Baumrind to explain differences in the way parents attempt to control and socialize their children. Do parents show lots of affection, or remain aloof? Do they expect blind obedience, or encourage children to ask questions? Do they enforce limits, or let kids do as they please? Here you will find information about the four basic parenting styles: As I explain in the linked articles above, authoritative parenting is associated with the best child outcomes. For more information, see also these reviews of And here--below--is an overview of the four basic parenting styles: What researchers mean when they talk about parenting style, and how different styles seem to affect children. What do researchers mean when they talk about "parenting style"? But parenting is more than a set of specific practices. Wasn't there a compromise? What does it matter?

The Long-Term Impact of Neglectful Parents Source: JPagetRFPhotos/Shutterstock If you were emotionally or physically neglected as a child, it can be a difficult journey to healing. Neglect can be a hard thing to put your finger on, especially emotional neglect. How to Cope With Parenting Differences With the demise of "Brangelina" being attributed, at least in part, to disagreements about parenting, you may be wondering if your own marriage or relationship is at risk. Differences in parenting is an area where many couples struggle, and it can lead to divorce or living with resentment when it goes unresolved. Do you think your partner is too strict, not engaged enough, or inconsistent when it comes to parenting?

The 4 Parenting Styles: What Works and What Doesn’t By Dr. Maryann Rosenthal, co-author of Be A Parent, Not A Pushover, reprinted with permission from DrMA.com I believe it’s that overall style or pattern of action — rather than a specific decision — that will most affect a child’s behavior. The 4 Types of Parenting Styles Parenting Styles describe the way parents react and respond to their children. Generally, there are four different types of parenting styles. These are Authoritarian, permissive, authoritative, and uninvolved.

Permissive Parenting: The Pros and Cons You may think there’s only one type of parenting. But according to parenting theorists, there are actually several different styles of parenting. One theorist came up with eight different styles of parenting, and of those, there are three that are most common in today’s modern-parenting: authoritative, authoritarian, and permissive. Let’s take a look at the different types of parenting and their pros and cons. Permissive parenting When Parents Clash: Managing Differences in Parenting Style Many aspects of a person’s life can influence their parenting style. The way an adult was parented, as well as parenting books and other guides, are a few factors. A parent’s unique fears and hopes for their child are another major influence. Cultural factors, such as gender roles, the community in which the family lives, religion, politics, socioeconomic status, and ethnic norms also play a role. When parenting styles clash, children get inconsistent messages from their parents.

4 Types of Parenting Styles and Their Effects on Kids Your parenting style can affect everything from how much your child weighs to how she feels about herself. It's important to ensure your parenting style is supporting healthy growth and development because the way you interact with your child and how you discipline her will influence her for the rest of her life. Researchers have identified four types of parenting styles:1 AuthoritarianAuthoritativePermissiveUninvolved Each style takes a different approach to raising children and can be identified by a number of different characteristics. Authoritarian Parenting What's your parenting style? ¿En español? As a parent, your approach to your child is as unique as you are. You can’t just wake up one day and be a different person because you read a book or watched a devilishly effective mother on the playground. Parenting isn’t only a collection of skills, rules, and tricks of the trade.

What Is Tiger Parenting? Tiger Moms Have Tough Rules, But a Lot of Warmth Amy Chua coined the term "Tiger Mom" in her book, The Battle Hymn of the Tiger Mother, in 2011.Since then, it's been used to describe a parenting style that uses harsh tactics like fear and shame, but also one that prioritizes familial closeness. Studies show tiger parenting has different outcomes, depending on cultural factors. The term "Tiger Mom" burst onto the scene in 2011 when Amy Chua, a Yale law professor and mother of two daughters, published a book about her parenting style called The Battle Hymn of the Tiger Mother. In it, she ascribes tiger parenting to Chinese parents (though she admits she uses the terms "Chinese" and "Western" loosely — and, really, anybody can adopt this style). "Western parents try to respect their children's individuality, encouraging them to pursue their true passions, supporting their choices, and providing positive reinforcement and a nurturing environment," she writes in her book, which was excerpted by the Wall Street Journal.

Parental Identity and Its Relation to Parenting and Psychological Functioning in Middle Age: Parenting: Vol 16, No 2 Starting in adolescence, a gradual change takes place from being a recipient of care to being a provider. Such development requires a change in the view of oneself in the world (Erikson, 1959 Erikson, E. H. (1959). Identity and the life cycle. (Psychological Issues Monograph No. 1). Four Basic Parenting Styles & High Awareness: Diana Baumrind My aim in this article is not to go into descriptive depth of the four basic parenting styles. Therefore you'll only get a very, very brief description of Baumrind's 3 parenting styles (a fourth one was added later by Maccoby and Martin). If you wish to read more about each one of Baumrind's 3 parenting styles, their presumed effect on children and a more elaborate introduction into Baumrind's anaytical tools of demandingness & responsiveness, you may want to read this article on the 3 parenting styles first. In that article on parenting styles, you'll get a presentation of each parenting style at full length. This article, on the other hand, will take 'meta' perspective on Baumrind's 3 parenting styles and go into analytical depth. Taking point of departure in recent, insightful academic comments on Baumrind's theories, I wish to take her model a step further.