25 of the greatest Sci-Fi books ever written 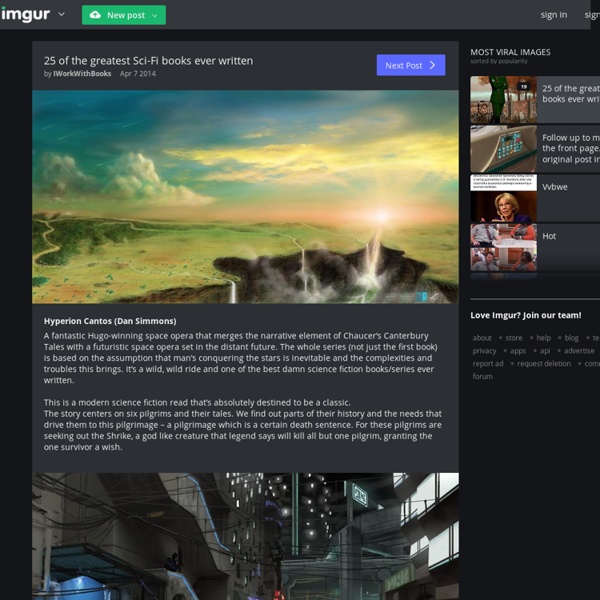 Your Picks: Top 100 Science-Fiction, Fantasy Books More than 5,000 of you nominated. More than 60,000 of you voted. And now the results are in. The winners of NPR's Top 100 Science-Fiction and Fantasy survey are an intriguing mix of classic and contemporary titles. Over on NPR's pop culture blog, Monkey See, you can find one fan's thoughts on how the list shaped up, get our experts' take, and have the chance to share your own. A quick word about what's here, and what's not: Our panel of experts reviewed hundreds of the most popular nominations and tossed out those that didn't fit the survey's criteria (after — we assure you — much passionate, thoughtful, gleefully nerdy discussion).

P. G. Wodehouse Sir Pelham Grenville Wodehouse, KBE, (/ˈwʊdhaʊs/; 15 October 1881 – 14 February 1975) was an English humorist whose body of work includes novels, short stories, plays, poems, song lyrics and numerous pieces of journalism. He enjoyed enormous popular success during a career that lasted more than seventy years, and his many writings continue to be widely read. Despite the political and social upheavals that occurred during his life, much of which was spent in France and the United States, Wodehouse's main canvas remained that of a pre- and post-World War I English upper class society, reflecting his birth, education and youthful writing career. An acknowledged master of English prose, Wodehouse has been admired both by contemporaries such as Hilaire Belloc, Evelyn Waugh and Rudyard Kipling and by recent writers such as Christopher Hitchens, Stephen Fry,[1] Douglas Adams,[2] J.

The Master and Margarita The Master and Margarita (Russian: «Ма́стер и Маргари́та») is a novel by Mikhail Bulgakov, written between 1928 and 1940 but unpublished in book form until 1967. It is woven around a visit by the Devil to the fervently atheistic Soviet Union. Many critics consider it to be one of the best novels of the 20th century, as well as the foremost of Soviet satires. In part, it is angled against a suffocatingly bureaucratic social order. History[edit]

Slaughterhouse-Five Slaughterhouse-Five, or The Children's Crusade: A Duty-Dance with Death (1969) is a satirical novel by Kurt Vonnegut about World War II experiences and journeys through time of a soldier named Billy Pilgrim. It is generally recognized as Vonnegut's most influential and popular work.[1] Vonnegut's use of the firebombing of Dresden as a central event makes the novel semi-autobiographical, as he was present during the bombing. Plot summary[edit] The story is told in a nonlinear order and events become clear through various flashbacks (or time travel experiences) from the unreliable narrator who describes the stories of Billy Pilgrim, who believes himself to have been in an alien zoo and to experience time travel.

Short Stories Online Homepage > Resources > Web Sites > Short Stories Online These Philip K. Dick stories come from Project Gutenberg and are stories that were written early in his career. For more reading formats, visit that site. Only html and text are provided here. Beyond Lies the Wub html text Beyond the Door html text Mr. Solaris (novel) Solaris is a 1961 Polish science fiction novel by Stanisław Lem. The book is about the ultimate inadequacy of communication between human and non-human species. In probing and examining the oceanic surface of the planet Solaris from a hovering research station the human scientists are, in turn, being studied by the sentient planet itself, which probes for and examines the thoughts of the human beings who are analyzing it. Solaris has the ability to manifest their secret, guilty concerns in human form, for each scientist to personally confront. Solaris is one of Lem’s philosophic explorations of man’s anthropomorphic limitations.

A Visual Timeline of AI Predictions in Science Fiction As anyone who’s started a company knows, choosing a name is no easy task. There are many considerations, such as: Are the social handles and domain name available?Is there a competitor already using a similar name? The Mysterious Flame of Queen Loana The Mysterious Flame of Queen Loana (original Italian title: La Misteriosa Fiamma della Regina Loana) is a novel by Italian writer Umberto Eco. It was first published in Italian in 2004, and an English language translation by Geoffrey Brock was published in spring 2005. The title is taken from the title of an Italian edition album of an episode of the American comic strip Tim Tyler's Luck. The plot of the book concerns Yambo (full name: Giambattista Bodoni, just like the typographer Giambattista Bodoni), a 59-year-old Milanese antiquarian book dealer who loses his episodic memory due to a stroke. At the beginning of the novel, he can remember everything he has ever read, but does not remember his family, his past, or even his own name. Yambo decides to go to Solara, his childhood home, parts of which he has abandoned following family tragedy, to see if he can rediscover his lost past.