National Geographic: Eye in the Sky 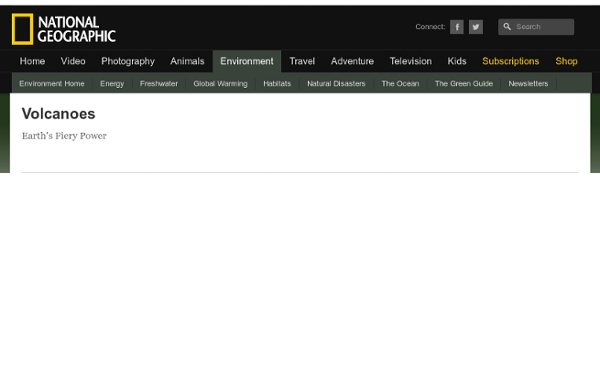 Volcanoes are awesome manifestations of the fiery power contained deep within the Earth. These formations are essentially vents on the Earth's surface where molten rock, debris, and gases from the planet's interior are emitted. When thick magma and large amounts of gas build up under the surface, eruptions can be explosive, expelling lava, rocks and ash into the air. The mountain-like mounds that we associate with volcanoes are what remain after the material spewed during eruptions has collected and hardened around the vent. A large eruption can be extremely dangerous for people living near a volcano. Volcanoes tend to exist along the edges between tectonic plates, massive rock slabs that make up Earth's surface. About 1,900 volcanoes on Earth are considered active, meaning they show some level of activity and are likely to explode again. Related:  whippets6

Volcano Live, John Seach List of volcanoes in Indonesia The geography of Indonesia is dominated by volcanoes that are formed due to subduction zones between the Eurasian plate and the Indo-Australian plate. Some of the volcanoes are notable for their eruptions, for instance, Krakatau for its global effects in 1883,[1] Lake Toba for its supervolcanic eruption estimated to have occurred 74,000 years before present which was responsible for six years of volcanic winter,[2] and Mount Tambora for the most violent eruption in recorded history in 1815.[3] Volcanoes in Indonesia are part of the Pacific Ring of Fire. The most active volcanoes are Kelut and Merapi on Java island which have been responsible for thousands of deaths in the region. In 2012, Indonesia has 127 active volcanoes with about 5 million people have activities within the danger zone. The word for Mount in Indonesian and many regional languages of the country (such as Javanese) is Gunung. Scope[edit] Major volcanoes in Indonesia Geographical groups[edit] Sumatra[edit] Banda Sea[edit]

How Volcanoes Work" Whenever there is a major volcanic eruption in the world, you'll­ see a slew of newspaper articles and nightly news stories covering the catastrophe, all stressing a familiar set of words -- violent, raging, awesome. When faced with a spewing volcano, people today share many of the same feelings volcano-observers have had throughout human history: We are in awe of the destructive power of nature, and we are unsettled by the thought that a peaceful mountain can suddenly become an unstoppable destructive force! While scientists have cleared up much of the mystery surrounding volcanoes, our knowledge has not made volcanoes any less amazing. In this article, we'll take a look­ at the powerful, violent forces that create eruptions, and see how these eruptions build volcanic structures like islands. ­When people think of volcanoes, the first image that comes to mind is probably a tall, conical mountain with orange lava spewing out the top.

Volcano Hazards Program List of deadly earthquakes since 1900 Magnitude (misc units) over time for deadly earthquakes since 1900 The following list compiles known earthquakes that have caused one or more fatalities since 1900. The list incorporates high quality earthquake source (i.e., origin time, location and earthquake magnitude) and fatality information from several sources. Earthquake locations are taken from the Centennial Catalog[1] and the updated Engdahl, van der Hilst and Buland earthquake catalog,[2] which is complete to December 2005. From January 2006, earthquake locations are from the United States Geological Survey’s Preliminary Determination of Epicenters (PDE)[3] monthly listing. Five columns of fatality estimates are provided. The third fatality column is taken from the Utsu catalog of deadly earthquakes,[4] and generally represents the total deaths resulting from an earthquake. * Most fatalities attributed to tsunami See also[edit] References[edit] Jump up ^ Engdahl, E. External links[edit]

land forms Terrestrial Volcanoes Terrestrial Volcanoes By turns hot embers from her entrails fly, And flakes of mountain flame that arch the sky.-Virgil's Aeneid Volcanoes destroy and volcanoes create. The catastrophic eruption of Mount St. Helens on May 18, 1980, made clear the awesome destructive power of a volcano. Ironically, these volcanic soils and inviting terranes have attracted, and continue to attract, people to live on the flanks of volcanoes. On August 24, A.D. 79, Vesuvius Volcano suddenly exploded and destroyed the Roman cities of Pompeii and Herculaneum. In the United States on March 27, 1980, Mount St. The word volcano comes from the little island of Vulcano in the Mediterranean Sea off Sicily. The following video clips are take from "Understanding Volcanic Hazards", © 1995, International Association of Volcanology and Chemistry of Earth's Interior (IAVCEI). Views of Terrestrial Volcanoes Isla Isabella This is an image showing part of Isla Isabella in the western Galapagos Islands. Carr M.

Volcano A volcano is a place on the Earth's surface (or any other planet's or moon's surface) where molten rock, gases and pyroclastic debris erupt through the earth's crust. Volcanoes vary quite a bit in their structure - some are cracks in the earth's crust where lava erupts, and some are domes, shields, or mountain-like structures with a crater at the summit. Magma is molten rock within the Earth's crust. When magma erupts through the earth's surface it is called lava. Lava can be thick and slow-moving or thin and fast-moving. Rock also comes from volcanoes in other forms, including ash (finely powdered rock that looks like dark smoke coming from the volcano), cinders (bits of fragmented lava), and pumice (light-weight rock that is full of air bubbles and is formed in explosive volcanic eruptions - this type of rock can float on water). Volcanic eruptions can cause great damage and the loss of life and property. The Word Volcano: The word volcano comes from the Roman god of fire, Vulcan.

SAVAGE EARTH Online Please note: SAVAGE EARTH ONLINE looks best when viewed using Netscape 3.0 or above, or Internet Explorer 3.0 or above, on Macintosh, Windows 95 or Windows 3.1. If you have an earlier version, or another browser, all pages may not be presented exactly as designed. To view the animations in SAVAGE EARTH ONLINE, you will need the free Flash plug-in. Premiere: July 19, 1998, at 8 pm (ET) on PBS. From the legendary fury of Mt. About the Series Program descriptions, TV schedule, videotape ordering information, and clips from the series. Hell's Crust: Our Everchanging PlanetArticle: The Earth at WorkSidebar: Probing the DepthsSidebar: "Black Smokers"Sidebar: The Ring of Fire The Restless Planet: EarthquakesArticle: Earth -- All Stressed OutSidebar: Learning from EarthquakesSidebar: Quake PredictionSidebar: Build Smart, Not Hard Waves of Destruction: TsunamisArticle: Surf's Up! Animations Menu Main Animations:The Hot ZonesEarthquake! Credits Credits for the Web piece and television series.