SnapFiles freeware and shareware downloads and reviews, trusted for quality since 1997 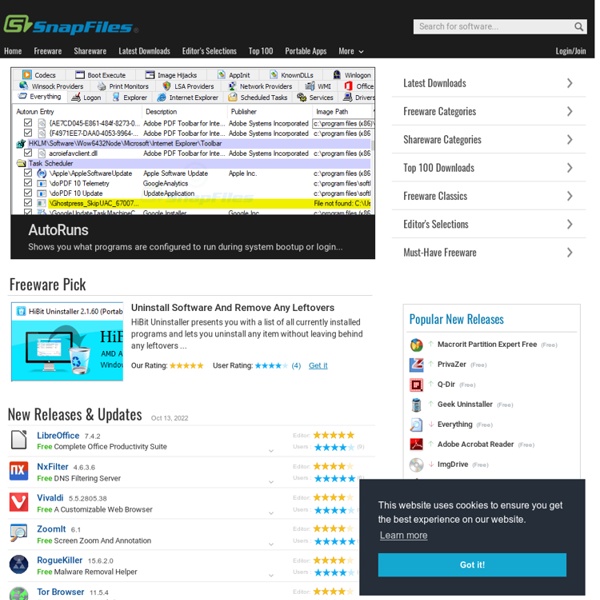 OpenSimon - The Simon Initiative The vision behind OpenSimon is a more integrated and easier-to-use toolkit, used and expanded by a larger community of educators to drive deliberate, iterative improvements in education. This approach supports educators as citizen scientists, and helps people who support them — at universities and companies that make educational products — provide help that is grounded in the science of learning. Elements of the toolkit provide support across all phases of the Learning Engineering Lifecycle: Design, Develop, Deliver, and Discover. The Cognitive Tutor Authoring Tools (CTAT), is a tool suite that enables you to add learning by doing (i.e., active learning) to online courses. CTAT supports the creation of flexible tutors for both simple and complex problem solving, capable of supporting multiple strategies that students may draw on when solving tutor problems. CTAT tutors track students as they work through problems and provide context-sensitive, just-in-time help.

Store Details - Microsoft Store Shop. Learn. Have fun. Our store associates are here to help. How to Make Your iPhone Scream When You Plug It In At the end of a long day of doomscrolling, both you and your iPhone probably feel like screaming. If you really want to freak out your friends, you can make your iPhone scream whenever you unplug it on iOS 14 or later. Let’s get it set up! Step 1: Get the Custom Scream Shortcut Before we dig into creating an automation in the Shortcuts app, you’ll need to download our custom How-To Geek Play Scream shortcut. To do that, you’ll first need to allow downloading from untrusted shortcuts in Settings.

Opinion: Across all sorts of tech forums, and particularly in TechSpot’s comment section, I’ve noticed a trend. Everyone loves to quote a 10-20% IPC (instructions per clock) boost for Zen 2, and, while I’m not ruling that out, I think it’s much less likely than what many people believe. That range has only come about because of a series of misunderstandings, errors, and easily refutable leaks, so I’m going to try to set the record straight. Rumors kicked off six months ago when an Italian computer company with a 32-core Epyc sample told Bits and Chips that Zen 2 offered a 13% IPC performance boost in scientific tasks. For starters, scientific tasks benchmark wildly differently to games – AMD already beats Intel in scientific and productivity IPC, while falling ~3% behind in games clock for clock. More importantly, using a 32-core server processor as a metric for an 8-core consumer processor is fraught with error.

Free Software Social Dynamics Why are FreeSoftware developers not pooling their efforts? They should be collaborating! And furthermore, why are they not all working on the most important problem: Getting GNU/Linux on the desktop!? The open source community needs to push as few cars as possible in as orthogonal directions as possible. This week, the news broke that Defense Secretary Gavin Williamson had been identified as the source of a leak from the National Security Council, and had been fired from the government. The BBC reported on Theresa May’s decision to axe her Defense Secretary of 18 months having found “compelling evidence suggesting [his] responsibility for the unauthorized disclosure.” Subsequent to his sacking, and facing calls for a full inquiry into what happened, the Prime Minister’s de facto deputy, David Lidington, has said “the PM considered the matter closed.” But this matter is far from closed. Mr Williamson denies that he leaked anything, and said in his response letter to the PM, “I strenuously deny that I was in any way involved in this leak and I am confident that a thorough and formal inquiry would have vindicated my position.” He continued, “I have always trusted my civil servants, military advisers and staff.

Category:Lists of software From Wikipedia, the free encyclopedia Subcategories This category has the following 6 subcategories, out of 6 total. Pages in category "Lists of software" Softpedia - Free Windows Downloads - Free Applications Build a Molecule 1.0.2 Learn how to build simple or complex molecules, view them in 3D and complete various assignments, ... May 24th, 17:11 GMT